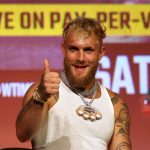 Jake Paul believes his fight with Anderson Silva will be ‘the biggest pay-per-view’ of his career. Paul, the YouTube star-turned-prizefighter, will fight former UFC middleweight champion Silva in a boxing match in Glendale on October 29. The 25-year-old, who started out posting videos on YouTube before making the switch to boxing, is 5-0 as a  Read More