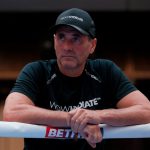 Conor Benn‘s trainer Tony Sims has broken his silence after his fight with Chris Eubank Jr was cancelled following a failed drugs test. Benn, 26, was informed that he had failed a drugs test with VADA (Voluntary Anti-Doping Agency) on September 23, which led the British Boxing Board of Control (BBBoC) to ‘prohibit’ Saturday night’s  Read More