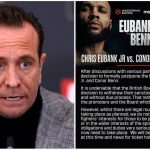 Chris Eubank Jr is ‘absolutely gutted’ after his fight with Conor Benn was postponed, according to promoter Kalle Sauerland. Saturday’s DAZN PPV main event between Eubank Jr and Benn has been called off after it emerged that the latter had failed a drugs test. Both men were reportedly still keen to proceed with the bout  Read More