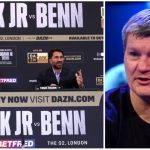 Boxing legend Ricky Hatton gave a brutal verdict when discussing Chris Eubank Jr‘s fight with Conor Benn being postponed. Benn was preparing to face Eubank Jr at the O2 Arena on Saturday night when it emerged that he had failed a drugs test. It was later clarified that he had returned an adverse finding for  Read More