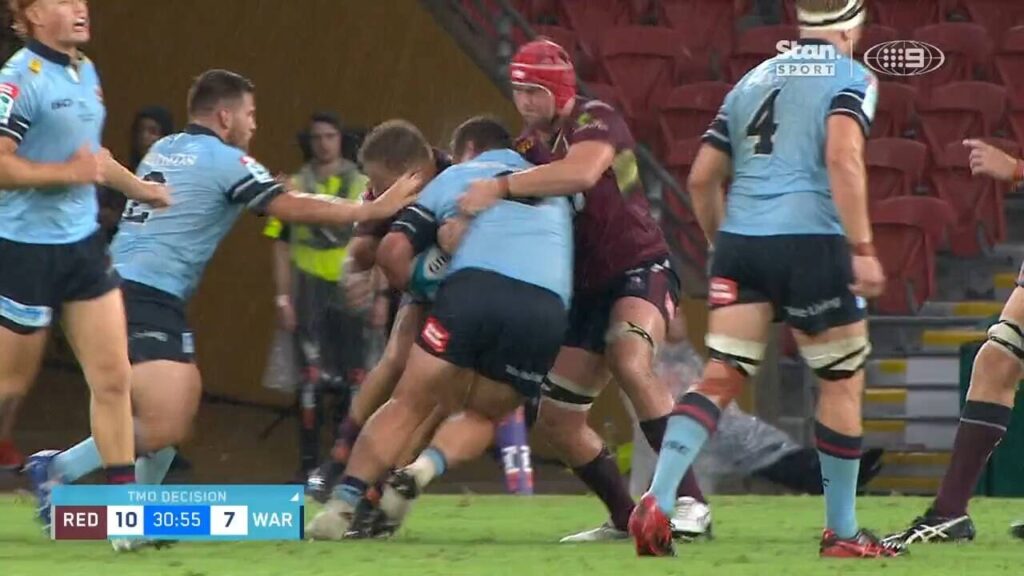 Rugby’s zealous on-field disciplinary system continued to confound Super Rugby fans, players and coaches alike after red and yellow cards in the space of 10 minutes hit Queensland in their 32-20 win over NSW on Saturday.

The Reds did well to concede only three points in the 10 minutes they were down to 13 men, and found their footing to run away with the match thanks to three second-half tries to Taniela Tupou, Fraser McReight and Jock Campbell. 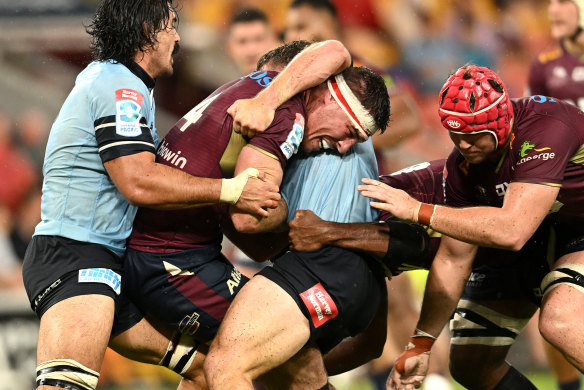 But a red card against prop Dane Zander for a dangerous tackle on Ruan Smith and a yellow against halfback Tate McDermott for a deliberate knockdown capped a bad run for the 15-man game. Red card debates marred the Six Nations in recent weeks and Brumbies fullback Tom Banks was sent off in his side’s one-point win over the Force on Friday.

The incidents led commentator and Wallabies great Tim Horan to call for a referral system similar to the NRL’s, a call echoed by NSW assistant coach Jason Gilmore, whose side stood to benefit from the two-player overlap at Suncorp Stadium.

“It’s rare to get through a professional rugby game at the moment with 15 on 15 for 80 minutes. People pay their money to come and watch, you get memberships and sponsors to come along,” Gilmore said.

“I’m not blaming the match officials with it as well, you get high contact and that sort of stuff is really big with concussion at the moment, so by no means am I having a crack at that. But as a Super Rugby live game we just have to have a look at, if we’re in the entertainment business and we’ve always been a momentum-based sport – compared to rugby league and the like – at the moment we probably lack a lot of momentum compared to the other two codes.

“I think it’s a really crucial time period, the next couple of years, to have this sorted. Timmy Horan mentioned, whether you put them on report and deal with them later or, if it’s foul play, deal with it straight away. I think we need to, as a game, look at that, because we can’t keep having professional games – 15 on 14, 15 on 13, 14 on 14 – it just takes away the fabric of what the game’s built on.”

Gilmore’s comments follow Brumbies coach Dan McKellar’s call for an amber card in rugby, after Banks was involved in an accidental head clash with Force winger Toni Pulu. Reds coach Brad Thorn didn’t want to buy into the issue on Saturday night but called for a more judicious use of the card system after three yellow cards were shown in his side’s win over the Drua earlier this month.