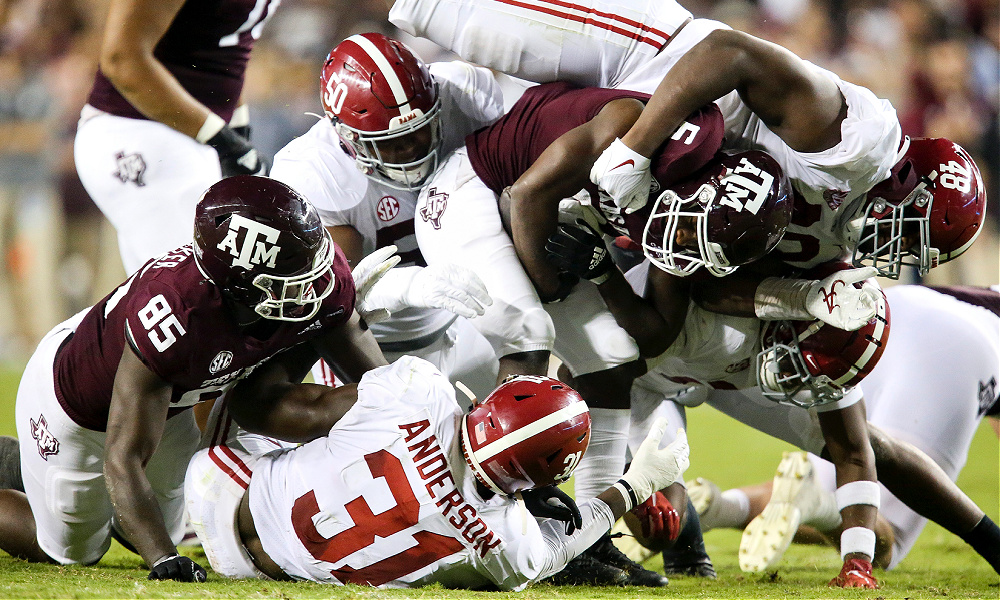 10 best predictions for the big Saturday of college football. What games appear to be the best bets and best picks for the Week 6 games?

We got the bad week out of the way.

It was bound to happen, and hopefully those of you who know how this rolls timed the fade right.

Everything went weird going 3-7, but now comes the bounceback.

No messing around with anything funky. No point totals – although under on the Duke-Georgia Tech 55 might be a meatball right down the middle of the plate. No gimmicks. Ten picks against the spread, ten winn…

Here’s the problem starting last week and going forward. It’s easier to find the disparities with 88 games and all the massive spreads fueled by too much guessing in the market.

Now the games are more even in an Any Given Saturday sort of way with conference play going, there are only 55 to choose from, and …

Whinin’ ain’t winnin’. Let’s do this.

I will never, ever, ever fault you for taking Alabama at home giving away points no matter how many they are.

I know this is a revenge game after losing last year, and I know the tiff between the coaches will matter, and I’m aware that it’s quite possible the Bama defense goes off and pitches a perfect game.

Is Bryce Young ready to go, and if so, what kind of shape is his shoulder in? I’m actually fine with the number even if he does play and is fine.

Alabama destroyed Utah State, ULM, and Vanderbilt. Texas? Way too close. Arkansas? The fourth quarter was devastating, but it got dicey 45 minutes in.

Alabama still has to prove it can be amazing for four quarters against someone good. Of course it can, but I’ll take the chance that A&M will bring something to this, too.

This is the most talented defense Alabama has faced so far. A&M might have lost to Mississippi State 42-24 last week, but it gave up a pick six and a kick six along the way. That D should be able to keep the Tide from going off.

Again, though, not fighting you if you see something completely different, and that also goes for this …

I know, I steered you terribly wrong last week believing Georgia would be Georgia again against a mediocre Missouri. That didn’t work out so well.

Georgia is back at home, somehow this is Auburn’s first road game of the season, and then there’s the scoring.

Auburn doesn’t really do that.

If you have a hard time getting to 17 points a home against Missouri, and you only score 24 against San Jose State, what are you going to do against a jacked up Georgia team at 3:30 on a Saturday afternoon on CBS?

Why did Georgia struggle over the last two weeks? No turnovers over the first three games, five in the last two. Auburn isn’t going to get the takeaways needed.

Warning, this the last stop before the train hits all favorites the rest of the way.

After a crazy start to the season and a wild Week 5, I’m buying into the idea that the favorites are about to settle in. I’ll bite on the Cardinal, though.

Oregon State gets a whole lot of love for pushing USC to the brink, but it’s been forgotten that it had to work a bit to get by Boise State and somehow got out alive against Fresno State. And then last week it all fell apart in the loss to Utah.

Another theme for this week that’s starting to show a pattern: turnovers. Oregon State has given away eight in the last two games with no takeaways.

Stanford is back at home for the first time in a few weeks, but it’s a touchdown underdog after going 1-3 with the lone win coming against Colgate. Yeah, and those other three games?

USC, at Washington, at Oregon.

Turnovers have been a problem, but the passing game has been solid, and this week even with the loss of leading rusher EJ Smith, the ground attack will be fine.

Think about Stanford winning outright, by the way.

At this point in the season I like to have a few more variables to go off of. Washington has only played one road game, and it wasn’t quite itself against UCLA.

Granted, the Bruins were brilliant in the 40-32 win, but the Huskies started to kick it all in in the second half. It was too late, but it was a moment that showed they really might be that good and got caught in tough road game against a solid unbeaten team.

Arizona State covered against USC, and the defense has been relatively okay despite giving up close to 34 points per game over the last four losses. However, Oklahoma State, Utah, and USC all beat the Sun Devils by more than 14 points.

The Huskies should throw and throw some more on the way to an easy win.

The Pitt loss to Georgia Tech was strange.

The Panthers threw the ball well, but the defense had a rough day against the run, it didn’t come up with any takeaways, and Georgia Tech forced three turnovers in the 26-21 win.

Virginia Tech should be the cure to that.

The Hokies can’t score – you and a few friends could score more than ten against North Carolina – they can’t run the ball, and the defense doesn’t come up with anything big with just two takeaways in the last four games.

Pitt should rebound from last week without a problem.

NEXT: College Football Pick Against the Spread No. 5: Nevada at Colorado State