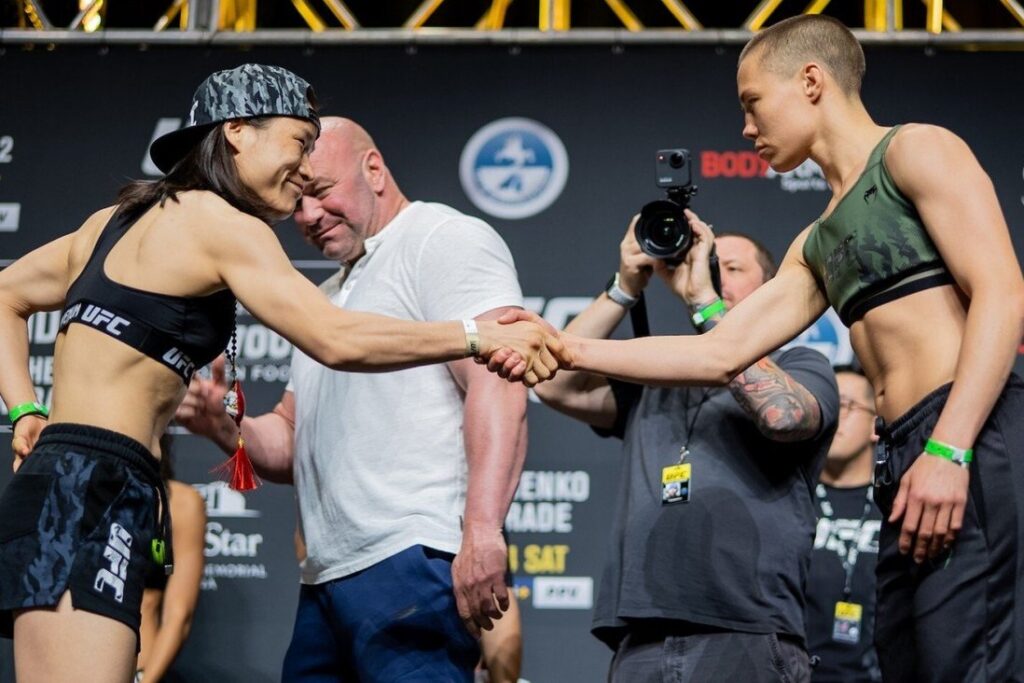 Former UFC strawweight champion Jessica Andrade has nothing but bad intentions for the winner of the title clash between incumbent Rose Namajunas and challenger Zhang Weili at UFC 268 on November 6.

The Brazilian (22-9) needs one more shot at the belt – after a bombed run at Kyrgyzstani-Peruvian Valentina Shevchenko (22-3) and her flyweight crown – and that is the reason she is quick to spread out her vision of how Namajunas-Zhang will work out.

The fact the 30-year-old took the title from Namajunas (10-4) via first-round knockout (slam) in May 2019, and then lost it to Zhang (21-2) via first-round TKO (knees and punches) in August 2019, adds considerable weight to her words. As does the three-round war Andrade lost to Namajunas in their non-title rematch in July of last year.

“I’ve fought them both and with Weili it was quick so I didn’t get a chance to know her as a fighter, but I fought Rose and I know her potential. I think she is going to win,” Andrade told the Post.

“Weili is very quick, Rose is stronger than she looks. I don’t think this will be a five-round fight, and I think Rose is going to get the win. Then I will fight anyone to get my shot and I will have my chance to win the belt back again.”

While the world will be watching Namajunas-Zhang at UFC 268, there’s a logjam of fighters at the top of the division who’ll be casting their gaze at what’s going on inside Madison Square Garden with a little extra intensity. The moment the fight ends the “who’s next” roulette wheel will begin spinning as it decides whomever is to face whomever leaves the cage as victor.

Poland’s Joanna Jedrzejczyk (16-4) sits ranked No 2 behind Zhang, and the surging American Carla Esparza (18-6) is at three, on a five-fight winning streak and surely due a shot at the belt soon. She certainly thought she’d done enough to get just that last time out when dismantling China’s fifth-ranked Yan Xiaonan (13-3, one no contest) via second-round TKO.