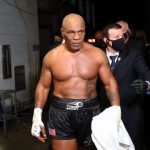 Mike Tyson is undoubtedly one of the greatest men to ever step into a boxing ring. Reigning as the undisputed world heavyweight champion from 1987 to 1990, Tyson won his first 19 professional fights by knockout, 12 of which came in the first round. To this day he still holds the record of the youngest boxer ever to win a heavyweight title, claiming his first belt when he was just 20.