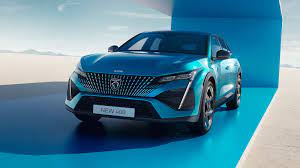 Autofun Philippines – Either way, Peugeot’s newest addition to its lineup has finally arrived and has been dubbed the ‘C-segment fastback’ by the French marque, designed to compete with the Citroën C5 X (which it shares parts) and is more SUV-like than the Renault Arkana.

Beneath the 408’s unmistakable elegance are the same platforms used in the Peugeot 308 small family saloon, as well as the new Vauxhall Astra. While the new car will only be offered with petrol and plug-in hybrid powertrains from launch, an all-electric e-408 is likely to be produced.

Just as egant as the 408’s exterior is its interior; like all modern hatchback cars of Peugeots, the overall design looks like something out of a concept car and the material quality is outstanding. Each version of the 408 receives the French brand’s i-Cockpit infotainment system that includes two central touchscreens as well as a 3D digital instrument cluster.

While not a high-performance car, the Peugeot 408 performs just as well as its sibling, the 308, on the road. The steering is precise – no doubt because of the car’s small steering wheel – and the suspension absorbs bumps well. The only downside is that no powertrain offers that much power; The Cupra Leon is the better choice if you are looking for a fast and sporty family car.

Aside from choosing the vehicle color and powertrain, the only other major choice for buyers is to choose from one of the 408’s three distinct trim levels:

The regular 308 is already so polished that it begs the question why anyone should upgrade to its new, larger, more expensive sibling. However, the 408 quickly established itself with a higher driving position and a larger 536-litre trunk. While we’d expect the petrol model to feel underpowered, the 408’s plug-in hybrid powertrain is sure to appeal to both private and corporate drivers.

While it looks like a mix between a 4×4 hatchback and a family hatchback, the Peugeot 408 leans more towards the latter in terms of running costs. There are options for customers:

one is fuel-efficient gasoline, and the other is a pair of plug-in hybrids for the company’s cars.

Thanks in part to its small size, the 1.2-litre PureTech petrol engine should deliver a fuel economy of 48.1 mpg in the combined WLTP test cycle. That’s slightly less than the equivalent 308 with the same engine fitted, though that’s to be expected since the 408 is a slightly larger car. With CO2 emissions of up to 156g/km, 408 petrol will be of little interest to corporate car drivers, however, with its 36-nefit-in-Kind (BiK) tax rating.

Instead, business users should consider one of the two plug-in hybrids on offer. Our pick would be the entry-level model 180, as it offers up to 40 miles of all-electric range, which means it’s good for the low 8% BiK range. The more powerful 225 PHEV can only go 39 miles on a single charge.

Whichever PHEV you choose, both can go back over 200mpg – as long as you keep the battery charged – and can charge at 3.7 kW as standard – the 7.4-inch faster built-in charger kW is available as an option.

The 408 feels more than capable on the road, though we suspect that the entry-level petrol engine won’t be powerful enough.

The Peugeot 408 shares many parts with the Citroën C5 X, and although that car is configured primarily for comfort, Peugeot says its product has been tailored to appeal to “drivers”. . So did it work?

Yes and no. While the 408 is certainly fun to drive, it doesn’t offer the same thrills as the Cupra Formentor. Just like in the 308, the steering works and the bodywork is kept to a minimum. Even on the battery-heavy PHEV models, the 408 never feels too heavy, though it also doesn’t feel agile enough to provide confidence when fully attacking the zigzag B-road.

That’s not thanks in part to the relatively weak powertrains on offer. Nowhere is the absence of grunt more evident than in the entry-level petrol car. This model uses a PureTech 3-cylinder engine, 1.2 liter capacity, 128 horsepower capacity. While we haven’t driven the 408 petrol yet, we’ve driven the lighter 308 with the same powertrain and it never felt really snappy. The numbers also don’t exactly favor the 408 gasoline; 0-62mph takes 10.4 seconds, meaning this variant will be best suited for city driving and lower speeds.

Both plug-in hybrid models use a 1.6-liter four-cylinder petrol engine, combined with an electric motor to produce 178 horsepower and 222 horsepower, respectively. PHEV ‘180’ 178 hp accelerates from 0 to 100 km/h in 8.1 seconds; while the 222bhp ‘225’ model looks a lot faster on paper, in reality it’s just 0.3 seconds faster at 62mph than its diminutive sibling. Fortunately, the electric motor’s instant torque means that both PHEVs feel more powerful than those numbers suggest. All 408 models – petrol and hybrid – come with an eight-speed automatic transmission which, unfortunately, can be slow to react at times.