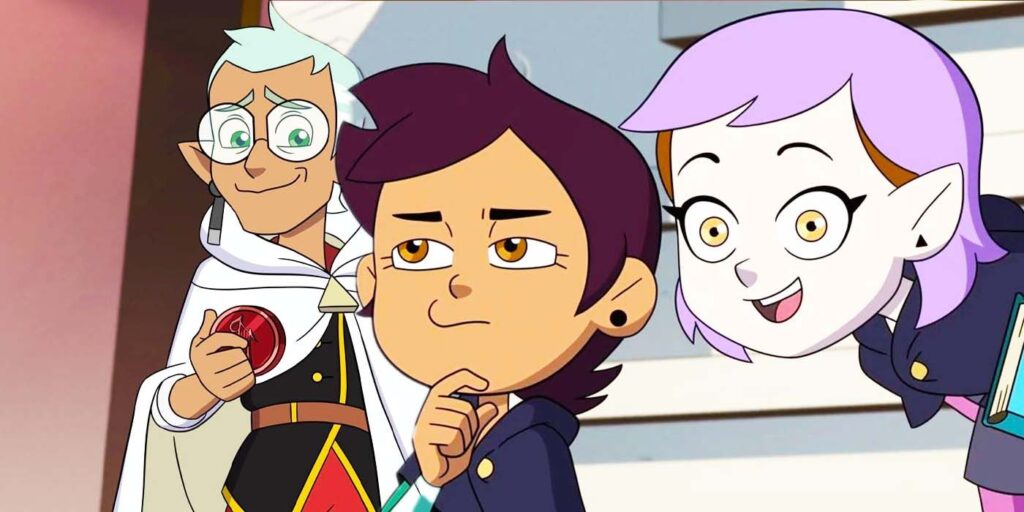 With The Owl House season 2, the show has proved that it is the next step for LGBTQ+ representation in animation. The journey has been far from perfect, but most forms of media have been making great strides to provide more accurate and positive portrayals of LGBTQ+ themes and characters. Animation has been one of the more noteworthy mediums to do this, and The Owl House season 2 has demonstrated just how far things have come.

Ever since its premiere in January 2020, The Owl House has included important LGBTQ+ representation in its characters and stories. Series creator Dana Terrace is bisexual and staff writer Molly Ostertag is gay and married to ND Stevenson, creator of She-Ra and the Princesses of Power, another show that has taken positive steps for LGBTQ+ representation in animation. Having LGBTQ+ creatives at work on the series helped the representation portrayed to feel that much more authentic. In The Owl House season 1 alone, Willow is revealed to have two dads, Dana Terrace confirmed that Luz is bisexual, and The Owl House season 1 episode 16, “Enchanting Grom Fright,” included a storyline around Amity being lesbian and having a crush on Luz.

Related: Are Netflix’s Masters Of The Universe And She-Ra Shows In The Same Universe?

It has been notoriously hard for creators to portray LGBTQ+ identities in animation, especially in children’s media, despite queer identities being expressed by young children and being independent from sexual content. Cartoon Network’s Adventure Time, for example, was unable to explicitly state that Bubblegum and Marceline’s relationship had been romantic for years, despite how important the relationship was for the characters. Meanwhile, in cases such as Scooby-Doo: Mystery Incorporated and How To Train Your Dragon 2 some characters’ sexualities were not confirmed until the creators spoke about them after the fact. Perhaps most egregiously, Gravity Falls creator Alex Hirsch has stated that he was forbidden by Disney from making Wendy bisexual and making any other positive representation explicit (via Twitter).

Even when animated stories have seemingly gone out of their way to provide positive representation, the result hasn’t always been good. Onward, for example, received a lot of attention for having an LGBTQ+ character in the run up to its release, but her sexuality was only mentioned in a small line of dialogue that was dubbed out in many countries. Similarly, Voltron: Legendary Defender ran afoul of borderline queerbaiting when showrunners hyped up the introduction of Shiro’s boyfriend, Adam, only for him to be in a single scene and die offscreen. While there was an attempt to rectify it by having the last scene of the show be Shiro getting married, it was to a character so minor that many viewers didn’t know he existed before then and it only exacerbated the issue.

More recent animation projects have worked to add positive LGBTQ+ representation where it can. In The Legend of Korra series finale, Korra and Asami enter the Spirit World together as a couple. However, while it was heavily implied, The Legend of Korra is another show where the LGBTQ+ content had to be confirmed after the fact, and the show has received criticism for not doing enough to develop their relationship. Since its release the creators have confirmed that they had to fight tooth and nail just to get even the implication of a queer relationship between the characters (via Tumblr), so as small as it might seem, it was still a very big moment in animations LGBTQ+ history.

Following The Legend of Korra animated projects have seen better LGBTQ+ representation, with improvements coming surprisingly quickly at times.  Adventure Time ran from 2010-2018, and while the early episodes failed in their handling of Bubblegum and Marceline’s relationship, by the series finale the two of them were able to kiss. In 2020, the related series Adventure Time: Distant Lands focused its second episode centered almost entirely around Marceline and Bubblegum’s relationship in an open and positive way. Steven Universe, created by Rebecca Sugar has a wealth of LGBTQ+ characters including a non-binary character in a relationship with the side-character Sadie, in addition to many storylines revolving around queer themes Notably, in Steven Universe season 5 Ruby and Sapphire get married and kiss (although this was censored in some countries). Many major and minor characters in She-Ra and the Princesses of Power are either explicitly or implicitly LGBTQ+, with a large portion of the show devoted to Adora and Catra’s relationship, and shows like Craig of the Creek, and Kipo and the Age of Wonderbeasts all have instances of queer relationships naturally developing over time, and Rocko’s Modern Life: Static Cling devoting much of its plot to Rachel Bighead’s coming out as trans.

Even with some missteps along the way, animation has taken major strides to improve its LGBTQ+ representation over the years, and it’s hard to see anything that represents that better than The Owl House season 2. Season 2 continues the development of Luz and Amity’s relationship, with the pair quickly coming to terms with their feelings and entering a relationship in season 2, episode 8. The Owl House having the pair get together before the end of season 2 allowed for the show to devote time to developing Luz and Amity as a couple, all while maintaining time to develop their own stories, as well. All of this reached its peak in The Owl House season 2 episode 20, “Clouds on the Horizon,” when Luz and Amity, after seeing each other for the first time in multiple episodes, share their first kiss. Following in the footsteps of Ruby and Sapphire’s 2018 kiss in Steven Universe, The Owl House season 2 is taking another step for LGBTQ+ representation by having two central characters have a relationship that is so visual and integral to the plot shown on screen.

The Owl House season 2 also included Eda’s relationship with Raine, who is nonbinary. Importantly, Raine being nonbinary is treated as something inconsequential by all of the characters in the show, and they have their own storyline separate from their relationship with Eda involving rebelling against Emperor Belos, played by Perry Mason‘s Matthew Rhys. This allows them to be seen as more than simply a character defined by their gender or as a shallow representation inclusion, providing them with their own agency throughout the show. Willow’s dads also continue to appear in The Owl House season 2, and one episode also implies that Edric might be queer by using gender-neutral pronouns to describe the person he is going on a date with. All of this comes together to make The Owl House season 2 an even better example of LGBTQ+ representation in animation than season 1, and this is all enhanced by the way that the representation is blended into the natural story and character development.

The Owl House is great for LGBTQ+ representation because it takes another step in a trend that has been growing and does so against so many negative forces. Particularly in children’s media, it has been difficult to provide accurate and sensitive portrayals that are key to the story. The Owl House season 2 achieves this in no small part because Dana Terrace refused to compromise until she was working with people who were more accepting of her ideas (via Today). By pushing back and refusing to compromise on those ideas, The Owl House has established a new baseline standard and it will force anything that comes after it to at least meet that baseline, if not exceed it.