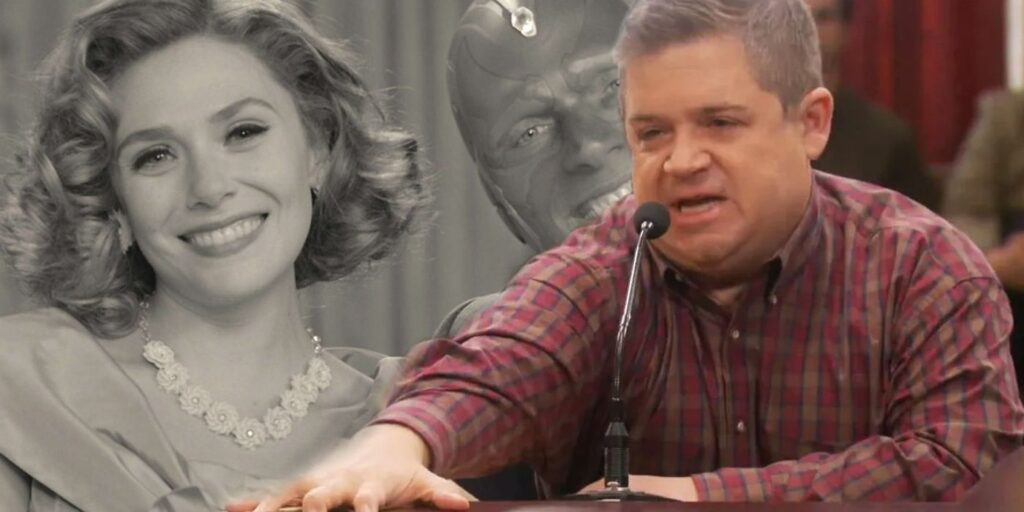 Patton Oswalt explains why he thinks Marvel Studios could end up like ’50s era Hollywood. Oswalt has been a stand-up comedian since the late ’80s and can seemingly talk about anything because of it. He possesses a deep fount of geek knowledge that covers everything from Star Trek to comics to foreign cinema, and his love of Marvel has earned him the chance to play several characters within the extended MCU, voicing both Pip in The Eternals and M.O.D.O.K. in Hulu’s animated series of the same name, which he co-created.

Oswalt’s knowledge certainly covers 1950s Hollywood, which was considered near the end of its “Golden Age.” In this era, starting in the late 1920s, a small number of large studios owned everything. Actors, directors, and writers were all under contract for a set number of years or a set number of films, which were all shot almost exclusively on backlots the studios owned and distributed through theater chains that the studios also owned. It was a nervous era for Hollywood executives. Post-WWII, there was a decline in audiences exacerbated by the meteoric rise of television (now in its own Golden Age) as the premier source of family entertainment. Not helping matters was the House Un-American Activities Committee, on a witch hunt to weed out “left-leaning” artists with supposed ties to communism, which saw hundreds blacklisted from ever working in the industry again.

While not living in an era ruled by the fear of government censorship or indictment quite like the ’50s were, Oswalt foresees a time of similarly fertile ground for Marvel Studios. Speaking in an interview with The Guardian, Oswalt expounds on how that era led to studios being so preoccupied with other concerns, that it benefitted some filmmakers’ ability to create things that otherwise wouldn’t have been made. Check out his quote below:

Some people, like Buster Keaton, very freewheeling, got crushed by the studio system. But others like Vincente Minnelli and Michael Curtiz thrived, doing amazing things using that system. To go deeper, here’s my question: when will Marvel unknowingly hire their Douglas Sirk, a guy who comes in and smuggles in all kinds of hidden richness they don’t even see at the studio? That’s gonna be great … We don’t know yet, what a 20, 30, 40 million Marvel movie looks like.

Oswalt argues that Marvel’s reign as the industry’s top dog can’t last forever and that in order to keep thriving, it will have to continue expanding in new ways. Box office results for Marvel films have remained strong, although movie theater attendance, on the whole, has been on the decline as more people stay at home, bingeing through the Golden Age of TV, with COVID-19 not helping matters. It’s hard to predict the feasibility of Oswalt’s argument to bring back mid-budget films with less studio oversight. Even on their smallest scale, a single episode of WandaVision and Loki reportedly cost Marvel around $20-25 million to make, not to mention whether Kevin Feige could really lessen his grip on projects.

Hollywood has all but forgone modestly budgeted projects. Companies either have divisions specializing in the release of independent films typically under $10 million to make or higher budgeted affairs almost exclusively based on existing IP. But if they follow Oswalt’s idea, maybe they’ll be able to bridge the gap between the two and make smaller, more unique stories, but centered around characters audiences are still familiar with. Some argue that Taika Waititi is such a person working within Marvel, like Sirk in the ’50s, who’s had more creative leeway. But like much of the MCU’s Phase 4, Waititi’s Thor: Love & Thunder has received mixed reception, and unlike Sirk, everything Waititi has done has been under the careful scrutiny of Feige. Oswalt could be onto something, but whether Marvel Studios will adapt to the changing times or continue as it has remains to be seen.