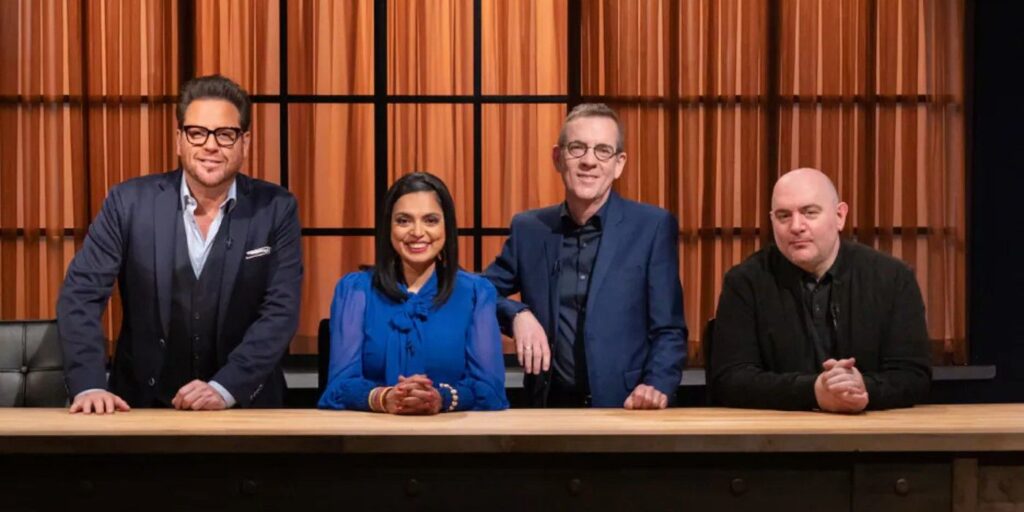 The classic Food Network show Chopped has identified the four accomplished chefs who will compete in the finale of its Desperately Seeking Sous Chef season, and they have some impressive careers. This season of Chopped follows the traditional format of four chefs competing over three rounds (appetizer, entrée, and dessert), using ingredients from the mystery baskets. However, it has one never-before-seen distinction: whoever wins the competition will not only become a Chopped champion, but will earn a job as a sous chef for one of the judges, legendary chefs Maneet Chauhan, Scott Conant, and Chris Santos.

Hosted by Ted Allen, Chopped debuted in 2009, and has been a staple on Food Network ever since. Chopped episodes air individually, or as parts of tournaments. The 16 elite chefs on the Chopped: Desperately Seeking Sous Chef season participated in a five-part tournament. In each of the first four episodes, one winner emerged, and those four chefs will compete to be crowned the Chopped champion. That winner will begin their work as a sous chef for one of the judges.

This Chopped season has been particularly challenging. On regular seasons, the contestants are judged solely on their food. However, on Desperately Seeking Sous Chef, the judges are also assessing their personalities and abilities in the kitchen, in order to determine if they want to offer them a job. The four Chopped winners who will compete in the finale on Food Network are Reuben Dhanawade (Part 1), Mat Espiritu (Part 2), Francisco “Paco” Moran (Part 3), and Lauren Windham (Part 4).

Reuben is a sous chef who manages a dining hall with a staff of over 30 people, which feeds over 2,000 people a day. According to his LinkedIn profile, Reuben is the sous chef at the University of Delaware at Aramark. Delaware Live shared that Reuben was born in India, and came to the United States in 1996. He earned associate’s degrees in the culinary arts and food service management from Delaware Technical Community College. He said that he has been “pretty deeply rooted in the Delaware restaurant scene for a while now.” On Chopped, Reuben shared that he is on a journey to rediscover his Indian roots, and he would most love to work with Food Network chef, Maneet.

Mat is the sous chef at Rustic Canyon in Santa Monica, California. His parents were born in the Philippines, so his favorite type of food is Filipino cuisine. Mat shared that he has worked with “countless Michelin-starred chefs.” and that he cooks with his heart. He said that he would love to work with any of the Chopped chefs, but working for Chris would be “awesome” because he admires him for achieving so much success at such a young age. Mat also shared that working with Chris will give him the opportunity to open a new restaurant.

Paco is the chef de cuisine at LA Cha Cha Chá. Originally from El Salvador, he studied at Le Cordon Bleu, and then worked for Patina Group for 13 years. He has done everything, from catering to fine dining. Paco revealed that he is competing for himself on Chopped, but also wants to win the competition to set a good example for his children. In the dessert round, Paco wanted to make a light and creamy Italian dessert that “would probably resonate with Scott,” so he decided to make a panna cotta with the basket ingredients, which he ended up turning into a mousse.

Lauren is a lead line cook at King + Duke in Atlanta, Georgia. She went to the Culinary Institute of America in Napa Valley. Her first kitchen was Ad Hoc, one of Thomas Keller’s kitchens. Lauren said that she is so ready to move up in her career. She remarked that she would love to work with Maneet because she thinks that what she has done with her career is so inspiring.

Chopped: Desperately Seeking Sous Chef is one of the most exciting editions of the Food Network show because the stakes are so high. Receiving a job from one of the Chopped judges is one of the greatest prizes that the show has ever offered. No matter who wins the overall championship, the judges will gain an impressive sous chef at one of their restaurants. Reuben, Mat, Paco, and Lauren are four of the best chefs that Chopped has ever seen.

Next: How Chopped: Next Gen Is Different From The Original Series