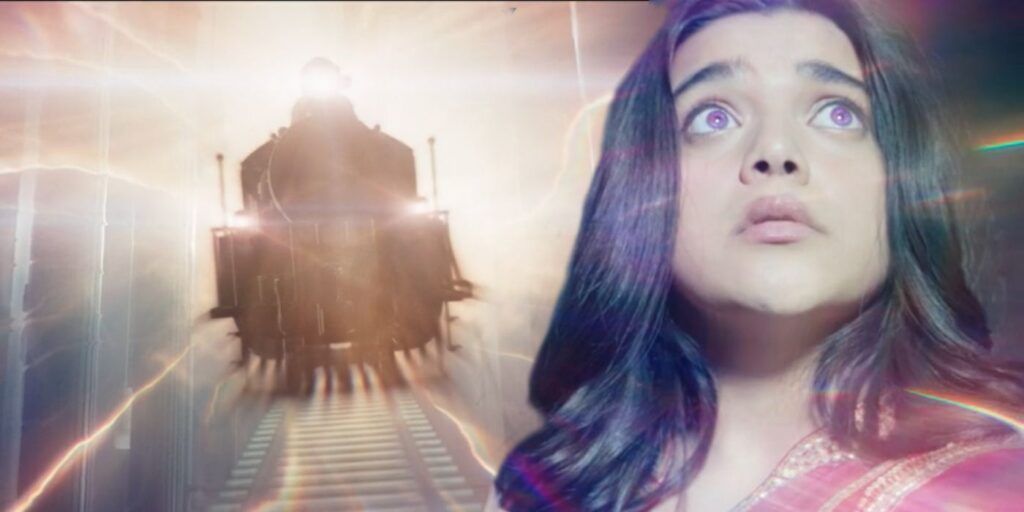 Ms. Marvel episode 3 deepened Kamala’s story as well as the mysterious bangle that unlocked her powers, with one vision about a train seemingly meaning a lot for both Kamala’s past and future. Episode 3 introduced the Clandestines, a group from another dimension who need Kamala’s bangle and her powers to return home. Towards the end of the episode though, Kamala witnesses a vision of a train, something linked to both her powers and her family.

The train in the vision had Karachi on the front, with the city linking to Kamala’s family in a big way. It was mentioned in Ms. Marvel episode 2 that Muneeba’s family escaped to Karachi on the last train to the city during the Partition. This proves that the train in Kamala’s vision links to both Kamala’s origins and her family with the vision seemingly featuring that specific train to Karachi. This link comes through Kamala’s grandmother Sana, and Sana’s mother Aisha. It was explained in Ms. Marvel episode 2 that Sana went missing from the train when she was a toddler. It is unknown how Sana managed to make it back to the train, with Sana simply stating that she followed a trail of stars back to her father. However, this was the same night Sana’s mother, Aisha, went missing.

Kamala, since having the bangle, has seen visions of Aisha and now the train to Karachi in Ms. Marvel episode 3. It is clear that these visions are linked, and that the train in Karachi is the key to what happened to Aisha. Sana explains in the episode that she also saw the vision, hinting that Muneeba may have seen it too and that Kamala must travel to Karachi. Given the link between the vision, Aisha, Sana, and Kamala, this vision may be a way of Aisha trying to communicate with her family by showing them all something that links them to the night she went missing.

This, alongside the vision of Aisha herself that Kamala has seen, hints at the former still being alive. It was confirmed that the Clandestines and Aisha are from another dimension, meaning she may not be on Earth but is still alive and trying to communicate with her family through the bangle and Kamala Khan’s visions. She may know that the other Clandestines have plans that could destroy Earth in trying to get back home and be reaching out to help Kamala find a way to both find her and help her people on Earth.

While the full story of Aisha, the bangle, and the visions aren’t quite complete, the pieces of the puzzle are slowly forming as Ms. Marvel continues. With the ending of episode 3 promising a journey to Pakistan for Kamala to meet her grandmother, with Kamala’s mother potentially tagging along, it is clear that the final three episodes of Ms. Marvel will only go to further explore the mystery around Kamala’s origins and the other dimension of the Clandestines.

New episodes of Ms. Marvel are released every Wednesday on Disney+.