What Happened To John Dee In The Sandman Season 1? | Screen Rant 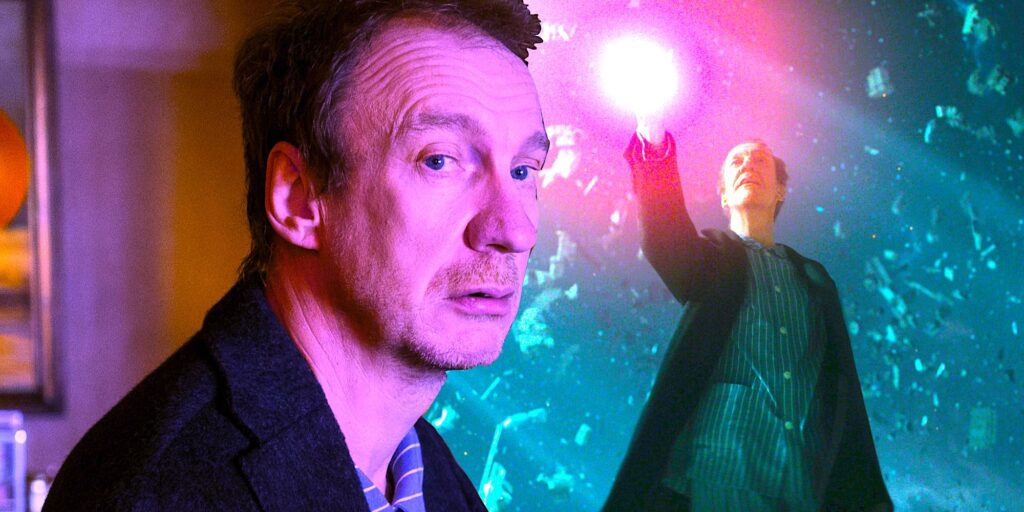 Warning: The following contains SPOILERS for The Sandman season 1.

Viewers of the Netflix series The Sandman might be confused by the final fate of John Dee in season 1 and left wondering what really happened to him. Despite playing an antagonistic role in the first half of the season and causing considerable damage, John Dee apparently goes unpunished for his crimes. This seems at odds with the general character of Morpheus, a.k.a. Dream of the Endless, who inflicted harsh punishments for far less when other people threatened the Dreaming and the Waking World.

In DC comics, John Dee was originally a supervillain. He used the alias Doctor Destiny and fought the Justice League of America using a variety of ingenious devices, including the Materioptikon, which allowed him to make dreams into reality. The Sandman comics introduced a retcon that established the Materioptikon was powered by the magical ruby that Dream of the Endless used to focus his powers.  Netflix’s The Sandman eliminates all references to the Doctor Destiny identity and Justice League of America, presenting John Dee as a misguided man who manipulated Dream’s ruby toward his own ends. He stole it from his mother, Ethel Cripps, who originally stole the sand, ruby, and helm containing The Sandman’s power from Roderick Burgess.

Related: Why The Sandman TV Show Is Not Set In the DC Universe

Both the comics and Netflix’s The Sandman season 1 build toward a climactic battle between John Dee and Dream of the Endless for control of the Dreaming. In the end, John destroys the ruby in the hope that it will destroy Dream with it, believing it to be the source of his power rather than just a focus for it. Instead, the ruby’s destruction frees the energies it contained, restoring Dream of the Endless to his full power. When asked if he intends to kill John for what he did, Dream says that he could, but instead he escorts John back to the prison hospital where he had been incarcerated and sends him to sleep in his cell.

The same chain of events unfolds in the original Sandman comics, but with John Dee and Dream having an encounter with the Batman villain Scarecrow on the way to John’s cell in Arkham Asylum. This sets up an amusing tableau, parodying The Wizard of Oz, with Dee declaring that “there’s no place like home,” in imitation of Dorothy Gale as he returns from the dream realm to reality. This seemingly put an end to John Dee’s criminal career as Doctor Destiny, although he would return in a later Justice Society of America story where he used his knowledge of the Dreaming to manipulate the similarly powered Legion of Superheroes member Dream Girl into fighting her friends on his behalf.

There are several reasons why Dream of the Endless might have decided to spare John Dee rather than killing him, beyond the simple fact that he is generally forbidden from killing mortals. In the comics, Morpheus’s character had not yet developed the empathy that would define his later interactions with others and was more concerned with regaining his power than the lives John Dee had ended with his actions. Netflix’s The Sandman offers another explanation in season 1 of the series, with Morpheus recognizing that John Dee was a victim of circumstance who had been accidentally corrupted by a power “not made for mortals.” In both instances, punishing John would have done nothing to bring back the people he killed and served little purpose from Morpheus’s perspective.

More: Who Is The Prodigal In The Sandman?

The Sandman season 1 is now streaming on Netflix.