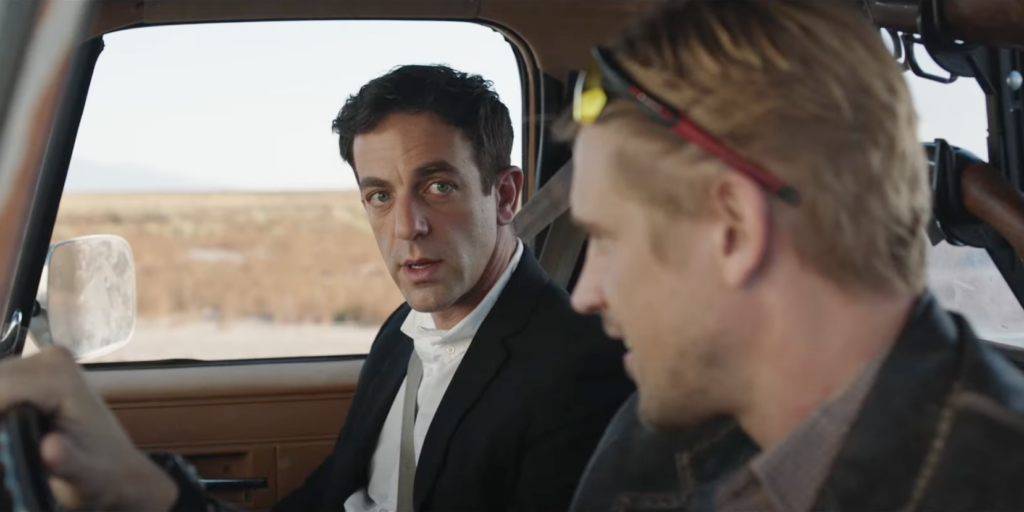 The Office is widely considered to be one of the greatest comedy series of all time, running for nine hit seasons on NBC. Starring a cast of mostly unknown actors and put together by a crew at the very beginning of their professional lives, The Office‘s success launched numerous Hollywood careers.

Many of those who worked on the beloved mockumentary have since gone on to create several notable projects, which were made possible by the notoriety that The Office brought its cast and crew. With B.J. Novak’s new comedy thriller Vengeance just hitting theaters, many fans should be inclined to explore several other passion projects from Novak’s one-time coworkers.

B.J. Novak, a prominent writer for The Office from its very first season and the actor who brought Ryan Howard to life, is one of the most important contributors to the overall tone of the sitcom. As a writer, Novak formulated several of the show’s most classic episodes, including “Diversity Day,” “Prince Family Paper,” and “Threat Level Midnight.”

Novak has worked on plenty of projects since leaving The Office, but perhaps none more distinguished than his most recent cinematic endeavor Vengeance, which he wrote, directed, and stars in. Novak’s new film perfectly blends into the dark comedy thriller genre, telling the story of a podcaster and a journalist who investigate the death of a woman they barely know.

One of The Office‘s most lovable characters, Jim Halpert, is portrayed by John Krasinski. As the years went on during the series’ run, Krasinski would take a more hands-on approach to its production, going on to direct several episodes, including “Sabre” and “Lotto,” and he even became a producer in the show’s final season.

John Krasinski has established himself as someone to watch in Hollywood over the past several years, thanks in part to his hit horror film A Quiet Place and its 2020 sequel. This new horror franchise has been one of Krasinski’s biggest projects since The Office ended and, as the co-writer and director of these films, the talented star has expanded his horizons in ways that few fans had ever dreamed he would.

Mindy Kaling was one of the most prominent members of The Office‘s writing staff since the very beginning, writing key episodes such as “The Injury,” “Frame Toby” and “Niagra,” the third of which earned her an Emmy nomination. Kaling also memorably portrayed Kelly Kapoor, Scranton’s customer service representative, for the first eight seasons of the series.

After leaving The Office, Kaling developed a new series in which she could star, The Mindy Project. The series captured many similarities to Kaling’s own life and launched her career even further than The Office had. The series ran for six seasons, cementing the actress/writer’s place in the television hall of fame.

Two cast members from The Office found a budding friendship during its production despite their character’s hatred of one another. Jenna Fischer, who plays receptionist-turned-saleswoman Pam Beesly-Halpert, and Angela Kinsey, who plays cold head accountant Angela Martin, both appear in all nine seasons of the series, fostering a friendship behind-the-scenes that would last them over a decade.

In the years since The Office ended, Fischer and Kinsey have gone on to star in their own podcast Office Ladies, in which they rewatch their flagship series in its entirety, helping fans learn brand-new information about their favorite sitcom along the way. Office Ladies has been nominated for several awards during its run, even winning the People’s Voice Webby in 2021 for a general series. The podcast is still running today, continuing its “deep dive” into The Office‘s history.

Rainn Wilson portrays the bizarre and opinionated salesman Dwight Schrute, whose lust for power and control often gets him in trouble. After the departure of Steve Carrell’s Michael Scott, Rainn Wilson would become the top-billed cast member in the show’s opening credits. As Dwight, Wilson is the only cast member in the series to physically appear and have lines in all 201 episodes of The Office.

In 2008, Wilson started a multimedia company called SoulPancake. The company’s endeavors included a podcast hosted by Wilson himself entitled Metaphysical Milkshake, short web series including Kid President, and several social media accounts, which were all created with the intention of creating dialogues to discuss “life’s biggest questions.” The company was acquired by Participant in 2021, ending many of SoulPancake’s original endeavors.

Though Rashida Jones only appears sporadically throughout The Office‘s run as Karen Filippelli, many fans remember her for her extended storyline in season 3, in which she served as the romantic foil against Pam Beesly for the affection of Jim Halpert. While Pam eventually ends up with Jim, many fans will never forgive Karen for standing in the way for as long as she did.

Rashida Jones would eventually team up with The Office star Steve Carell once more with their series Angie Tribeca. Jones starred in the eponymous role, while Carell co-created the series alongside his wife, Nancy. The series ran for four seasons on TBS, coming to an end in 2018.

Oscar Nunez portrays level-headed accountant Oscar Martinez in all nine seasons of The Office. His character is a frequent voice of reason in the series, though his temporary disappearance in season 3 after being kissed by Michael Scott leaves the office somewhat uneven in its balance of sanity and chaos.

Oscar’s extended absence from The Office actually occurred in order to allow the actor to participate in the half-hour improvised comedy series Halfway Home, which starred five comedians as recently-paroled convicts living together in attempts to reintegrate into society. The series ran for ten episodes on Comedy Central, with Nunez returning to The Office after wrapping filming.

Lee Eisenberg and Gene Stupnitsky were two of the most prolific writers during The Office‘s run. They are the writing team behind unforgettable episodes like “Dinner Party,” “Scott’s Tots,” and “The Cover-Up.” The two also occasionally made cameo appearances as Vance Refrigeration employees Gino and Leo.

Eisenberg and Stupnitsky would team up once more for the 2019 coming-of-age comedy film Good Boys, starring Jacob Tremblay as a middle schooler who, along with his two best friends, decide to stop playing the “good boys” and act out. The film’s two writers also directed, receiving their first directorial credit for a theatrically released film.

Brian Baumgartner portrays the endlessly quotable accountant Kevin Malone. Because of his childish tendencies, Kevin often finds himself being parented by his coworkers, especially Oscar and Angela. The character is especially well-known for his unfortunate chili incident, which acted as the cold open for the episode “Casual Friday.”

Years after The Office had ended, Baumgartner started his own podcast entitled The Office Deep Dive, exploring the ins and outs of America’s favorite sitcom. This endeavor was transitioned into a wide-ranging exploration of creativity in Hollywood, changing its name to Off the Beat in 2022.

Michael Schur was a key writer on The Office in its early seasons, acting as the voice behind several important episodes such as “The Alliance,” “The Return,” “Office Olympics,” and many more. Schur is also well-known for his recurring role on the series as Dwight Schrute’s oddball cousin, Mose.

Fresh off the success of The Office, Parks and Recreation, and Brooklyn Nine-Nine, Schur would create a very different brand of sitcom in The Good Place. Starring a host of memorable characters, The Good Place explored the nature of humanity and morality in a way that very few television series are brave enough to do. This unique series would inform the future of Schur’s career, with its philosophical endeavors leading directly to his new book, How to be Perfect: The Correct Answer to Every Moral Question.

NEXT: The 10 Best TV Shows To Watch On Netflix This Month