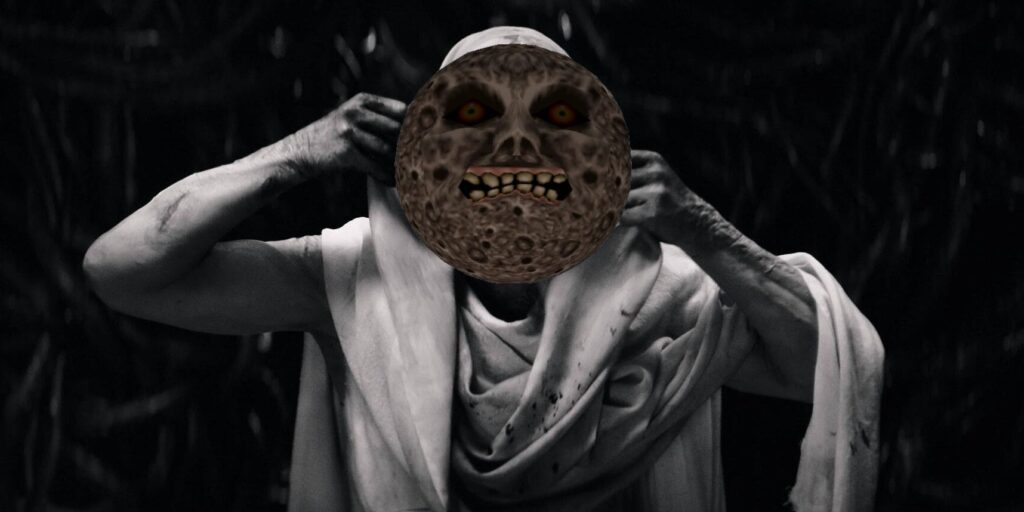 Famed voice actor Mick Lauer noticed that Thor: Love and Thunder villain Gorr and the world-ending Moon from The Legend of Zelda: Majora’s Mask bore a striking resemblance. The terrifying face of the Moon from Majora’s Mask has haunted Zelda fans for years and, in many ways, has become more iconic than the game’s eponymous mask. One fan even risked endangering their aquarium with Majora’s Mask‘s Moon by casting its heinous facade over their own fish tank.

If there was one thing that solidified the experience of Majora’s Mask in the hearts of Zelda fans, it was the malevolent aspect of the Moon’s ghastly visage looking down upon them. In Majora’s Mask, the Moon is the ever-present herald of doom destined to destroy the land of Termina in three days of in-game time. With each passing day, the sinister face drew closer to Termina, its ominous presence becoming more horrifically apparent in the skies above. At the end of the three days, the Moon collides with Termina, ending the game in an apocalyptic fashion. With this type of foreboding atmosphere so rarely explored in the Legend of Zelda series, many fans believe now is the time for a new Zelda game in the Majora’s Mask vein.

Prominent voice actor Mick Lauer, of JoJo’s Bizarre Adventure fame, shared via Twitter a photo noting the similarities between Christian Bale’s portrayal of the God killing Gorr in the soon to be released Thor: Love and Thunder, and Majora’s Mask’s apocalyptic Moon. The comparison shows that the two powerful beings have similar color and facial structures, with the pronounced veins of Bale’s appearance remarkably similar to the Moon’s craters and ridges. While the Moon’s iconic sneer greatly outmatches Gorr’s sadistic grin, a greater similarity exists between their blazing, cratered eyes, both gleaming with destructive desire.

With many hoping for Nintendo to return to the Majora experience, contemporary comparisons by fans like Mick Lauer could bode well for such an endeavor. Growing up in the shadow of the lauded Ocarina of Time, Majora’s Mask never enjoyed the overwhelming acclaim its predecessor received. However, thanks to a 3DS remake and a competent Switch Online port, Majora’s Mask is now more accessible than before. Perhaps new eyes on the product combined with celebrity intrigue could potentially motivate Nintendo to move in on a follow-up to this underrated gem.

Comparisons like these are a staple of social media humor, with many encountering at least one of these hysterical pictures on a consistent basis. With a design so frightfully eccentric as The Moon from Majora’s Mask, it’s no wonder the entity has been lampooned in many different comparisons and fan edits. But despite its comical, out of context appearances, it’s that iconic diabolical grimace that made The Legend of Zelda: Majora’s Mask so memorable in the first place.

Next: Everything BOTW 2’s Story Can Learn From Majora’s Mask But Change