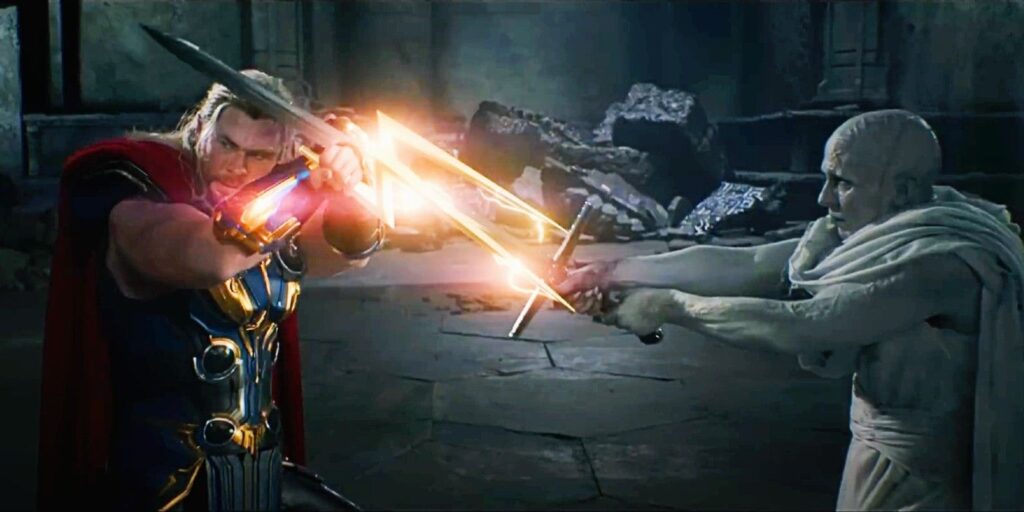 That reinvention just might continue in Love and Thunder. The new movie picks up with Thor following the events of Avengers: Endgame, which saw the hero at his lowest point. Described by Waititi as a mid-life crisis, Thor begins Love and Thunder searching for some peace. However, the emergence of a new villain, Christian Bale’s Gorr the God Butcher, confirms Thor won’t be able to put aside fighting forever. Love and Thunder also features the returns of Jane Foster (Natalie Portman) – now a hero herself after picking up Mjolnir and becoming the Mighty Thor – and Valkyrie (Tessa Thompson).

Related: Gorr Is Already Thor’s Worst Villain (Because of Thanos)

In the latest Thor: Love and Thunder trailer from Marvel Entertainment, Gorr and Thor’s massive fight is further teased with the inclusion of new scenes from the movie. Clocking in at just 30 seconds, the promotional video shows new snippets of the God of Thunder using his powers in unique ways. Check out the clip below:

Based on all the official footage released thus far for Love and Thunder, Thor and Gorr will encounter each other at least twice. The first time should be their initial fight in what is presumably the shadow realm. This sets up the God of Thunder’s next mission, which will send him to Zeus (Russell Crowe) in an effort to warn the gods of the villain’s inevitable attack. Then, there is the mandatory third-act battle between the Avenger and Gorr. It’s difficult to say when the pair’s battle from the Thor: Love and Thunder trailer takes place, as it’s also possible that they have other entanglements that have been saved for the movie. Aside from that, there’s also a possibility that some of these scenes are used purely for marketing purposes since it’s no secret that Marvel likes to trick fans.

While not much is known about Thor: Love and Thunder‘s bad guy, Gorr the God Butcher could very well be the most dangerous villain that Thor has faced. Gorr’s grudge against the gods stems from suffering a personal tragedy, and he believes that the higher entities failed to protect him from the experience. This could hit a raw nerve for Thor after his catastrophic mistake in Avengers: Infinity War led to Thanos’ snap. If so, it could be that the conflict in Thor: Love and Thunder will be deeply personal, thus heightening the stakes. As the trailer shows, it will also be a thrilling battle, so audiences have much to look forward to.