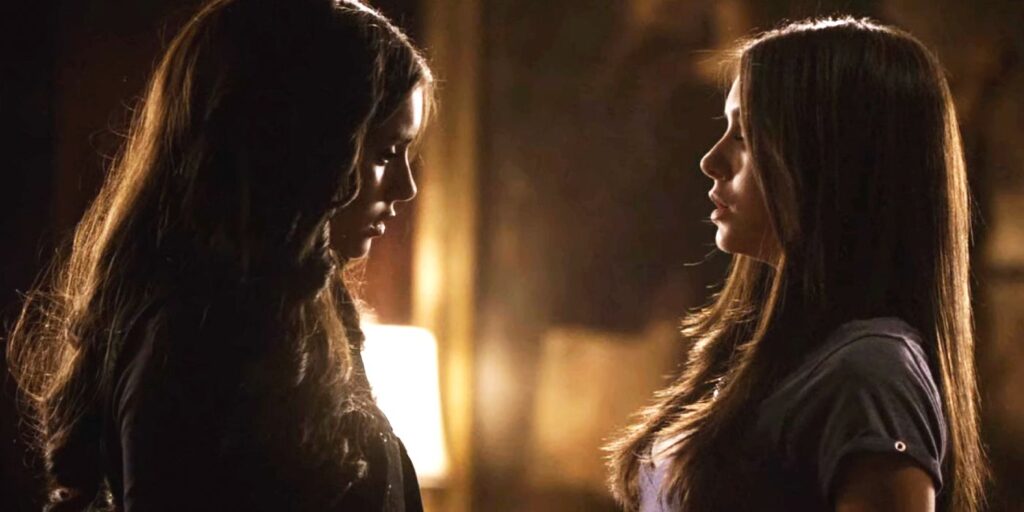 Fans are ruing the (seemingly temporary) end of the universe of The Vampire Diaries, but fortunately, rewatch marathons of the show will always keep the show alive for them. Iconic characters defined TVD through the years, but Katherine and Elena were undoubtedly the most memorable players on the show.

With the exact same face, the two were as different as chalk and cheese, However, if observed closely, there were many eerie similarities in both the women. The paths they chose and even a few traits matched, despite Katerina being a villain and Elena being the heroine.

The biggest early twist in the tale in The Vampire Diaries was that Katherine and Elena were doppelgängers, the result of Qetsiyah’s curse on Amara and Stefan. They were identical in looks, but their personalities were very different.

This also meant that Katherine and Elena were related by blood. They all belonged to Amara’s bloodline, and while distant, they were relatives to each other, and to poor Tatia as well. Their lives, through the beginning of time, were destined to be entwined.

As Katherine’s story was revealed, fans found out how much she had changed over the years. Just like Elena, when she was young and innocent, she had lost her entire family to Klaus’ misdirected anger. When she became a vampire, Klaus killed all of Katherine’s siblings and both parents horrifically.

Poor Elena went through a similar fate. She lost her parents in a tragic car accident, which she survived herself. Jeremy died enough times, and she also lost her Aunt Jenna to Klaus, just like her doppelgänger.

Ultimately, Elena as a character was not as compassionate and kind as she was portrayed — she had murdered five named characters and also countless unknown Travelers. Jesse, Connor the vampire hunter, Alaric, Jolene, Markos, and his followers were all of Elena’s victims.

Katerina was a known villain, and it would be hard to calculate just how many people she had slain in her 500-year-long vampire and spirit life. Some notable victims were Jeremy and Caroline.

By virtue of being doppelgängers whose blood was tied to the curse that suppressed Klaus’ wolf side, both Katherine and Elena were born with a bullseye on their backs. Katherine managed to escape her murder, but at the great price of losing family.

Elena faced the same torment as Klaus chased her down to drain her of her blood too. Ironically, Katherine was the one who led him to Elena. Luckily, John Gilbert managed to link his life to Elena’s so she didn’t die after the curse was broken.

Elena never wanted it, but due to Rebekah’s machinations, she was turned into a vampire. She had her ups and downs as a vampire, and for a while, there were two identical vampires walking around Mystic Falls.

Katherine used people willfully, but Elena did exactly the same thing with her friends, only without the cattiness and threats. Rose, Trevor, Isobel, the tomb vampires, and Mason were just a few people whom Katherine manipulated with a promise of love and friendship, but they always suffered for her wrongdoings as she saved herself.

Elena used her friends as shields against all the evil beings who were after her. Bonnie suffered the most as she lost her parents and used her magical powers for vampires at Elena’s behest, even if her ancestors didn’t want her to. Caroline, Stefan, and Damon were also always going out of their way to help her, and she didn’t seem to mind that.

Elena was best friends with Bonnie, who realized that she was descended from the powerful line of Bennett witches early in the show. Bonnie saved Elena from many dire situations with her magic, and the two of them remained friends, despite Elena’s vampiric connections.

Uncannily enough, Katherine’s companion in 1864, Emily, was also a Bennett witch who willingly helped Katherine carry out her cunning plans. She had no issues using her magic for Katherine and her vampire friends and was quite docile.

This is the biggest similarity between the two doppelgängers — their bond with the Salvatore brothers. Katherine played both Damon and Stefan, seeing them at the same time, feeding their jealousies (along with vampire blood), and turning them both into vampires.

Elena began by falling in love with Stefan, but just like Katherine, she got involved with Damon too. Both Katherine and Elena loved Stefan and Damon, like history was repeating itself.

At different points in the show, Elena and Katherine exited in a way that resembled death but wasn’t quite it. At the end of season 6, Elena was put in a deep sleep which would only break when Bonnie died, so she was gone for all intents and purposes.

NEXT: 10 Memes That Perfectly Sum Up Damon As A Character In The Vampire Diaries