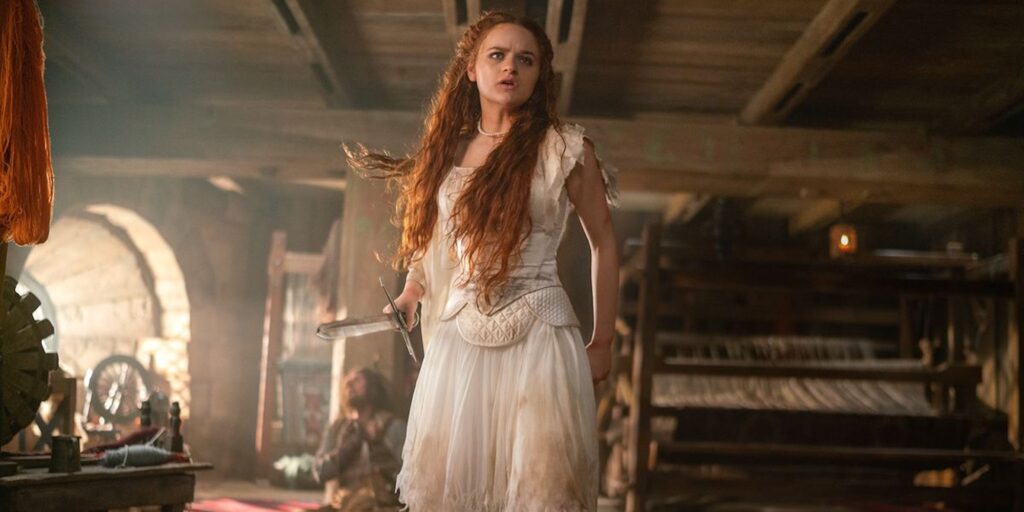 In recent years, there have been quite a few onscreen princesses standing up to whatever evil stands in the way of their happiness or freedom. But there hasn’t been a fairy tale inspired by the likes of John Wick or The Raid – until now. Directed by Le-Van Kiet, The Princess is an impactful actioner. Joey King puts great effort into pulling off the action heroine poses and executing her fight moves with precision and flair. The camera constantly moves to give the audience that feeling of fright and uncertainty to keep the momentum going.

The Princess follows an unnamed princess (King) in an unnamed fictitious kingdom who finds herself trapped at the top of a tower in her family’s castle. Drugged up, dressed in a flowy white wedding gown, and shackled, the Princess appears to be in quite the jam. That is, until two thugs from the invading party stumble into the room and the Princess promptly kills them both with moves unbefitting of a delicate lady. Thus starts her journey to reach the bottom of the tower, all while evading capture, killing bad guys, rescuing her family, and maybe dispatching of her would-be jilted husband.

Joey King and Veronica Ngo in The Princess

When it comes to the action, The Princess is solid, with several well-staged action sequences to enjoy without wondering why the editing is masking the main attraction. One shouldn’t expect anything else from the director who gave us Furie, starring Veronica Ngo, who also appears in this film. Kiet’s directing adds much-needed kinetic energy into what could have easily been a slog of an action film. Natalie Holt injects a healthy dose of badassery into the usual fairy tale orchestral score. Lorenzo Senatore’s cinematography captures the brightness of the average fairy tale with a hint of Disney flair, a fun juxtaposition against the violent inclination of this story. Technically, the film checks off all the right boxes to create a princess fairy tale that takes its inspiration from single-location actioners. The only flaw lies in the barebones script from Ben Lustig and Jake Thornton. In fairness, there is not much that needs to be written, but some hiccups pull away from the enjoyment of watching a pretty princess slaughter a lot of grown men on her way down a tower.

The film fumbles in the moments where it attempts to string together a story. There are sequences featuring the vindictive and scorned suitor Julius (Dominic Cooper), all of which are eye-roll inducing. At best, he is a stock character, comically played by Cooper, who perhaps believed he was in an entirely different movie. However, this movie lacks the comedic backbone to make Julius’ buffoonish presence feel right. His main traits involve him being sexist, bigoted, and racist; he’s also not the sharpest person. There are a few times when flashbacks are utilized to paint a picture of what happened the night before when Julius stormed the castle, but with a few essential context clues already present, they become redundant.

Dominic Cooper in The Princess

Despite some recent projects undercutting her gifts, King has proven to be a capable and stunning lead actress. The Princess is a film that solidifies her innate charisma. Although her faux British accent could use a great deal of work, King’s commitment to the action and the varying emotional state of her character are clear and present. It would have been fascinating if the film didn’t feature any dialogue for her character because her accent is scarcely heard, but her battle cries are hard to miss. And while the film is a barebones fairy tale, the film reinforces old industry habits. Veronica Ngo’s Linh is the only significant character besides the royal family, Cooper and Olga Kurylenko’s Moira. Ngo’s presence signifies Hollywood’s reluctance to let go of the trope of skilled Asian fighters training white protagonists. Linh joins in on the action part way through the film, but there is no doubt that The Princess could have discarded this habit. With little done to flesh out the kingdom and its inhabitants (besides a few remakes from Julius citing the King’s progressive immigration policies), The Princess has no allegiance to tired tropes.

All that said, The Princess is a nice change from the steady stream of live-action princess fairy tales that Disney has primarily been providing audiences for years. It’s a change of pace that builds upon the recent trend of having princesses picking up a sword to fight for their land and family. Stripping down the story to just the action is a thrilling concept that fully engages with the idea of the Princess saving herself. All in all, The Princess is a bloody good time.

NEXT: The Black Phone Review: A Thrilling But Convoluted Serial Killer Story

The Princess began streaming on Hulu Friday, July 1. The film is 94 minutes long and is rated R for strong/bloody violence and some language.