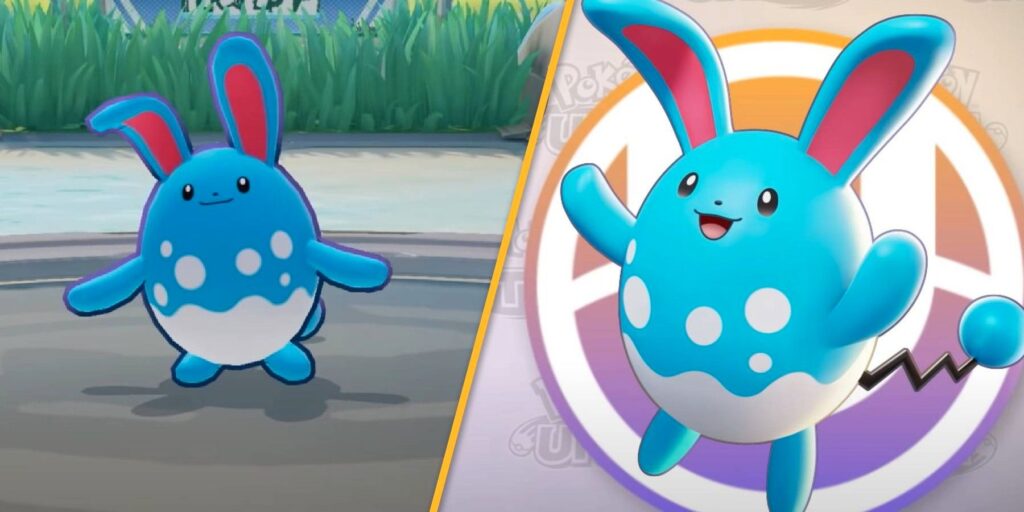 The newest character to join Pokémon Unite is Azumarill, a Water/Fairy-type All-Rounder Pokémon. This pocket monster is a melee physical attacker and is easy to pick up, as the recommended difficulty is Novice. Azumarill excels at healing and sustaining during fights. Other Pokémon will have a hard time taking on this All-Rounder in a solo fight. Pokémon Unite gives players multiple options for each character, and choosing the best build for Azumarill can be tricky.

Like most monsters that have multiple evolutions, players start with a Marill. Every third basic attack increases damage and hits in a cone area of effect in front of the character. Since Marill will be using basic attacks frequently, players are advised to bring the Muscle Band for a significant amount of bonus damage. Even though Held Items are considered pay-to-win by the community, they are crucial to prepare before a match. The Buddy Barrier is great to have because Azumarill will be able to supply a shield often since the Unite Move charges quickly. Bringing a Focus Band is also a great safety net for the increased health regeneration after hitting 25% HP. Lastly, players should use the X Speed Battle Item to increase movement speed, chase down opponents, or ensure escape in a bad situation.

The game’s newest All-Rounder should not be taken lightly and can be a constant threat in team fights. Marill and Azumarill have the passive ability Huge Power, which causes every hit to a single target to become a critical hit. The damage can never be a critical hit when hitting two or more enemies at once. Additionally, Marill’s critical hits deal 150% damage instead of the normal 200%. Like some Defenders in Pokémon Unite, the All-Rounder can charge at the enemy with Tackle, leaving the target stunned for a short time. Marill’s second move is Bubble, spraying a cone of bubbles and dealing damage to all Pokémon in the area of effect. The attack can be used while moving and enemies have their movement speed temporarily decreased. Marill’s Unite Move is Belly Bash and pounds itself three times, losing 5% HP with each pound in exchange for increased attack and a 5% max HP shield. The All-Rounder can move during the duration and is able to charge an enemy afterward, damaging and pushing away anyone hit. Like each character, the Pokémon’s playstyle changes depending on the items and moves chosen after evolution.

The best build in Pokémon Unite for Azumarill revolves around isolating and taking out a single target. When given the option, after evolving at level five, trainers should upgrade Bubble into Whirlpool. This move will summon four small whirlpools that swirl around Azumarill, healing the character. Enemies hit will take damage and increase the health restoration. At level seven, Tackle should be upgraded into Play Rough. This move increases movement speed by 35% and allows Azumarill to lunge with the next basic attack, dealing damage and stunning the enemy for .75 seconds. Play Rough is outstanding for engaging in a team fight, pinning a target down, and racking up damage with Whirlpool, all while healing through attacks.

Azumarill can be highly “tanky” if built correctly and annoying to deal with in battle. However, the Pokémon is exceptionally effective at taking out a single target and can distract opponents long enough for Attackers in Pokémon Unite to take out other threats. Trainers that wish to play a character that has high sustain and can disrupt enemies in a team fight should try out this Azumarill build.

Pokemon Unite is available on Nintendo Switch, iOS, and Android.