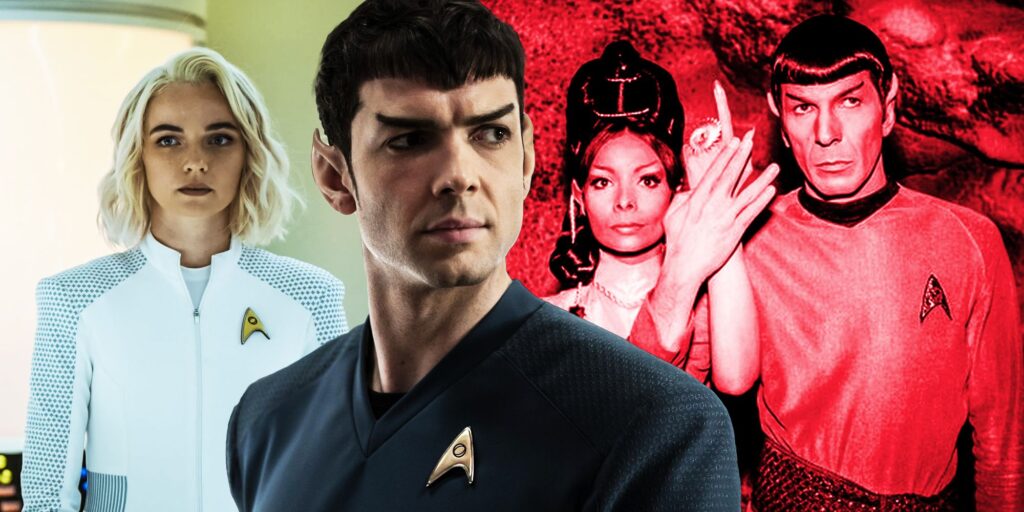 Nurse Christine Chapel’s (Jess Bush) long-lasting unrequited love story with Spock (Ethan Peck) has begun in Star Trek: Strange New Worlds and is poised to last into Star Trek: The Original Series. In Strange New Worlds, Captain Christopher Pike (Anson Mount) leads the Starship Enterprise on a new five-year mission of galactic exploration. Pike is joined by his two most trusted officers, Lt. Spock and Number One AKA Lt. Commander Una Chin-Riley (Rebecca Romijn). Meanwhile, Nurse Chapel is part of the new personnel coming aboard the Enterprise and she’s destined to be attracted to Spock for many years to come.

In Star Trek: The Original Series, Nurse Christine Chapel (Majel Barrett) had romantic feelings for Spock (Leonard Nimoy) that the Vulcan Science Officer couldn’t reciprocate. At this point in his life and Starfleet career, Spock was fully matured and dedicated to maintaining the logical Vulcan way of life, especially in the face of incessant teasing by Dr. Leonard McCoy (DeForest Kelley). However, Chapel, Dr. McCoy’s nurse, longed for Spock and made her feelings known to him. McCoy was also aware of Chapel’s attraction to Spock, as was his colleague in Sickbay, Dr. M’Benga (Booker Bradshaw). There were a few occasions on TOS when Spock called Chapel “Christine” and returned her affections but the Vulcan always reset back to his stoic self. No actual romance between Spock and Nurse Chapel happened in the three seasons of TOS or in any of the six Star Trek movies starring The Original Series cast.

Related: Star Trek: Every Doctor On The Enterprise

However, Strange New Worlds may establish that something romantic could occur between the younger Spock and Nurse Chapel. In Strange New Worlds‘ series premiere, Christine showed just a hint of regard toward Spock when she synthesized a serum to work with his Vulcan physiology and turn him into a member of Kiley 279’s race for their landing party rescue mission. But in Strange New Worlds episode 2, “Children of the Comet,” Chapel noticeably stepped up her flirtation with Spock as she prepped him to beam onto a rogue comet. There were definitely sparks between the medical officer and the Vulcan, and even Cadet Nyota Uhura (Celia Rose Gooding) couldn’t help but detect it. Of course, when Uhura referred to Chapel as Spock’s “girlfriend,” the Vulcan adamantly denied it, which left her a little confused as to what she saw.

What neither Chapel nor Uhura are aware of in Strange New Worlds is that Spock is engaged to T’Pring (Gia Sandhu). They were promised to each other as children but their romance blossomed as adults. Although Spock returned to Starfleet and set off on a five-year mission aboard the Enterprise, at this point in his life, Spock intends to marry T’Pring. Of course, it doesn’t come to be. In the Star Trek: TOS season 2 episode, “Amok Time,” T’Pring (Arlene Martel) goes to great lengths to break her engagement to Spock, whom she no longer loves. In fact, Spock kept his arranged marriage to T’Pring a secret from his best friends, Dr. McCoy and Captain James T. Kirk (William Shatner). Uhura also doesn’t know about T’Pring until “Amok Time.”

Still, as a prequel, Star Trek: Strange New Worlds has an open canvas to toy with expectations and develop the classic TOS characters like Spock and Nurse Chapel while still (hopefully) maintaining Star Trek canon. After all, both Spock and Christine are young in Strange New Worlds and the intriguing possibility exists that something could happen between them on Pike’s Starship Enterprise. Even if it did, the Vulcan and nurse could easily swear to keep it just between them. Indeed, romantic sparks between Spock and Nurse Chapel in Star Trek: Strange New Worlds could add context to some of the intimate moments Chapel and Spock share in TOS, especially since T’Pring is millions of lightyears away at home on Vulcan.