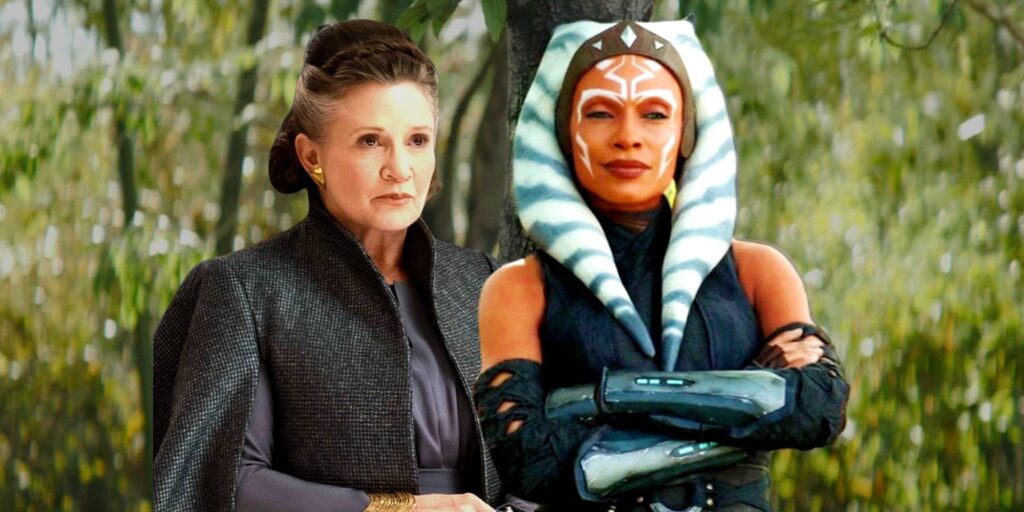 Star Wars actor Rosario Dawson fondly remembers an encounter with Carrie Fisher at a convention. Although the science-fiction franchise has expanded far past what it was when Fisher first appeared as Princess Leia in A New Hope, her influence on the franchise and its fans hasn’t faded one bit. Star Wars fans around the world were devastated by news of Fisher’s death in 2016, but she has continued to inspire them even today.

One of these fans is Dawson, who made her debut in the Star Wars universe in The Mandalorian season 2 as Ahsoka Tano, Anakin Skywalker’s former apprentice, who was voiced by Ashley Eckstein in The Clone Wars. Dawson credited her playing Ahsoka to fancasts of her as the character dating back to long before The Mandalorian was released. Dawson will also be reprising her role in the Disney+ limited series Ahsoka that is set to premiere next year. The upcoming series will also feature characters from the animated Star Wars: Rebels series, including Natasha Liu Bordizzo’s Sabine Wren.

Related: Star Wars: Tales Of The Jedi Can Make Ahsoka Better (And Worse)

While Dawson will soon be returning as one of Star Wars‘ most popular female characters, the actor still shows immense respect for the franchise’s original leading lady. TheWrap reports that Dawson recalled a previous encounter with Fisher at a convention while at C2E2 this past weekend. The Ahsoka star shared a fond story about how caring Fisher was to her fans, and how fun she was to meet. Check out Dawson’s story below:

We all, we long had since been done with our signing and her line was like, around the convention center and she stayed, and she signed [for] everyone. She was such a fun broad. Like, just so dynamic, and just such a character, and she was just so great with everyone, with her little dog.

Since her passing, many people have shared their fond memories of Fisher, including her Star Wars twin Mark Hamill. Overall, everyone has agreed that she was not only a talented actor but a wonderful person, and Dawson’s story further reaffirms these points. Any regular convention attendee will know how exhausting the lines can be, and Fisher was gracious enough to ensure her fans’ efforts didn’t go to waste. That must have been a gratifying experience for everyone who saw her and her dog that day.

While Dawson doesn’t explicitly name it in this story, it seems clear that Fisher had an immense influence on her. Dawson herself has been a frequent guest at conventions, and her constant gratitude towards the fans who chose her for the Ahsoka role points to her own character. Now she must act as the role model that Fisher was for so many people, and so far, it seems Dawson is doing a great job carrying Fisher’s legacy in the Star Wars franchise.

Next: Star Wars’ “Not For Kids” Plan Is A Huge Mistake