Space Force: Why General Naird’s Wife Is In Prison 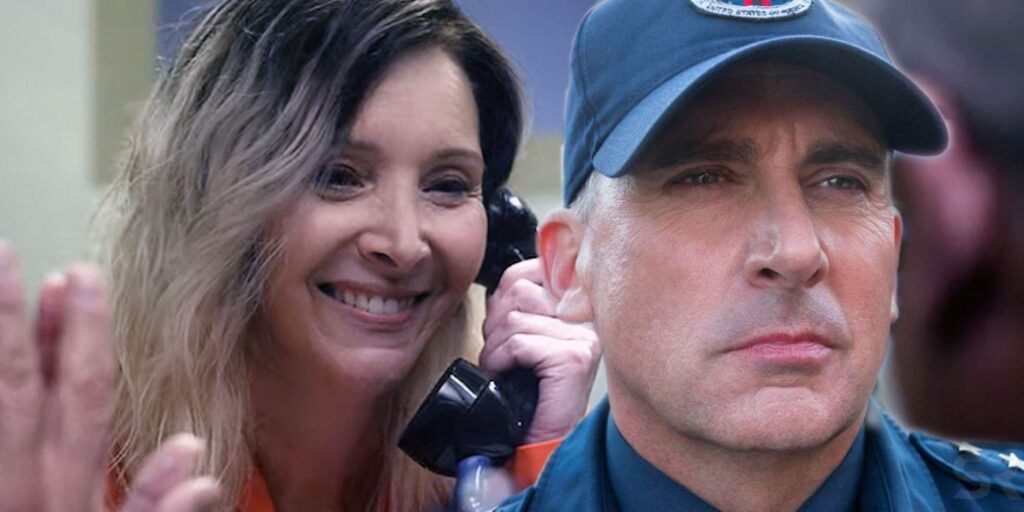 One of the biggest questions surrounding Space Force is why Maggie Naird is in prison, a topic that the show dances around quite a bit. The character, played by Lisa Kudrow, serves as the wife of Steve Carell’s General Mark Naird, the leader of the Space Force branch of the U.S. Armed Forces. Carell also co-created the Netflix series alongside Greg Daniels, who he previously worked with on The Office.

Maggie is first introduced in the Space Force premiere when a ceremony is being held for Mark as he is made a 4-star general of the Air Force. She and her teenage daughter, Erin (Diana Silvers), are in attendance just before her husband is named the Chief of Space Operations. The series then jumps a year later to when the Naird family relocates to Colorado, where Space Force’s headquarters are located. While Mark and Erin are acclimating to their new surroundings, it’s revealed that Maggie is in a nearby prison.

As the series goes on, it’s expected that the details regarding Maggie’s jail sentence would come into focus, but that isn’t the case, even throughout Space Force season 2. The reason for her sentence is never directly explained. Instead, she remains in the facility as her husband and daughter visit or video chat with her from time to time. As explained in an interview (via The Wrap) with Daniels, the ambiguous situation is intentional. He stated that “at the moment, we’re kind of enjoying the mystery around it and the question marks that it raises.” While the reasoning behind the gag remains unknown, there are a few clues that people should make note of.

When Mark first tells his wife that they will leave Washington, D.C. for Wild Horse, Colorado, Maggie feels so dismayed that she starts crying. This presents the notion that she has been heavily against the idea from the start. While interacting with her family throughout Space Force, Maggie mentions she would be in prison for a “long time” before the series states that she was sentenced to 40-60 years, which is just a notch lower than a life sentence. Based on the “very serious” conviction, some have theorized that she might have been involved in a kidnapping, drug trafficking, or some type of fraud, if not treason.

Whatever Maggie did to find herself in prison, it doesn’t completely hurt her relationship with Mark or Erin since they both make it a point to visit her. With the help of her prison guard/lover, Louise, Maggie eventually escapes from the prison in the Space Force season 1 finale when Erin needs help. She and her family are last seen in the helicopter being piloted by Mark, but that freedom doesn’t last long.

At the beginning of Space Force season 2, General Naird’s wife, Maggie, is already back in prison. Following the cliffhanger ending in the previous season, Mark returned his wife to prison to fulfill her sentence. Still, season 2 doesn’t answer what crime Maggie committed to acquire such a long prison sentence. Kudrow’s character still appears but in a limited capacity, considering she’s still locked up and decides she wants a divorce from Mark. However, while Erin chats with Patton Oswalt’s Captain Lancaster, the teenager alludes to the severity of Maggie’s criminal activity, confirming it was worse than selling knockoff Estée Lauder products. Captain Lancaster also comments, “and she only got 20 years for that?” implying that Maggie somehow received a shortened sentence or committed multiple crimes, considering the 40-60 years the show has previously mentioned. Either way, Space Force‘s biggest question is a source of fun, extending the joke at the expense of curious viewers.

Despite Maggie’s imprisonment being a bit of a running joke on Space Force, the fact that no one will ever know why she’s in prison isn’t all that funny. Though it performed decently among audiences and sported an all-star comedic cast, Space Force was canceled after two seasons, meaning no one will ever know why Maggie is in prison. The series essentially ended on a cliffhanger, with the Space Force HQ being hacked by the Russians and a giant asteroid seen hurdling toward Earth. Despite the series’ season 2 ending, nothing was able to save the show, as it didn’t even last a week on the Netflix top ten list. While the second installment fared better than the first, it was already too late for the show, so Netflix pulled the plug. Since there won’t be a Space Force season 3, audiences won’t ever know why Maggie was in prison, and series creators aren’t likely to address the question. On the plus side, the showrunners absolutely had the last laugh in their needlessly mysterious game.