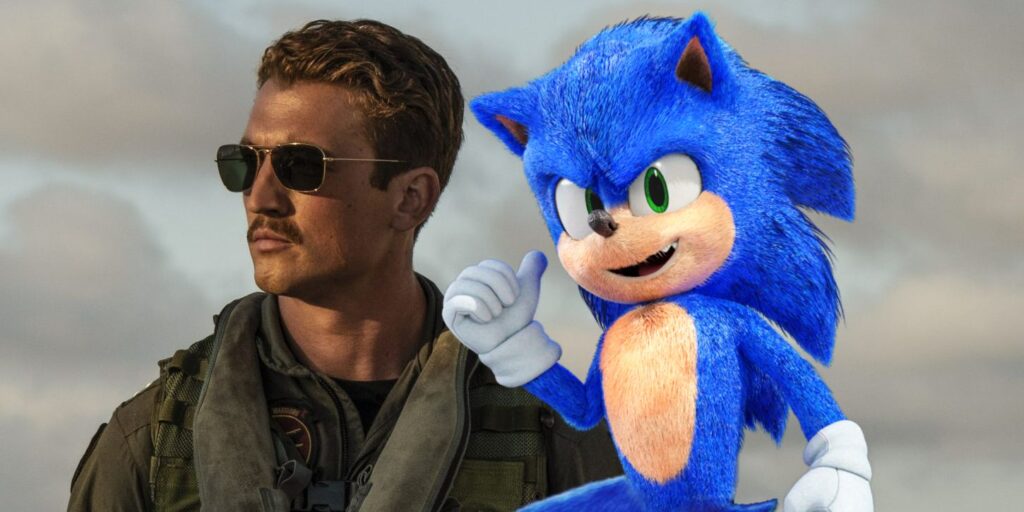 AI art shows Sonic the Hedgehog flying alongside Top Gun 2‘s Maverick and Rooster. It’s been a big year for all three characters, with Sonic the Hedgehog 2 releasing in April and Top Gun 2 in May. Both movies were praised as worthy sequels expanding on the success of the original films. Sonic the Hedgehog 2 became the highest-grossing video game movie in the United States, while Top Gun 2 made more money at the global box office than any past film in star Tom Cruise’s career.

Both movies also introduced new characters to their respective franchises. After appearing briefly in a credits scene in the first film, Tails plays a major role in Sonic the Hedgehog 2, with Idris Elba also making his debut as Knuckles. Meanwhile, Top Gun 2, set 36 years after the original movie, features almost all new characters, including Rooster (Miles Teller), Hangman (Glen Powell), and Penny (Jennifer Connelly). Rooster and Maverick’s relationship plays an especially big role in the film, as Rooster is the son of Maverick’s best friend Goose, whose death was a pivotal moment in the original movie.

Now, AI-generated art created using the DALL-E mini program imagines Sonic the Hedgehog flying alongside Maverick and Rooster in Top Gun 2. It makes for an unexpected crossover, which can be viewed below.

The DALL-E mini program has risen in popularity lately, with users typing in whatever prompt comes to mind. It’s especially fun for TV and movie enthusiasts, with the capability to generate everything from Moon Knight dressed as Batman to Captain America holding Baby Yoda. It’s a neat way to imagine unexpected characters crossing paths when they likely never will onscreen. Some of the AI art is more believable than others, but it always gives a general idea of what audiences might expect if the prompt were to come to life at some point.

In the case of Sonic, Rooster, and Maverick, the combination of animation and live-action would normally be jarring. However, since both Sonic the Hedgehog movies utilize a mix of CGI and live-action, it works quite well. Considering Sonic’s impressive speed and other worthwhile skills, it seems like he would be a help to Rooster and Maverick on their Top Gun 2 missions, though he might also serve as an unnecessary distraction at times. Of course, since Sonic isn’t likely to encounter Rooster and Maverick, it’s hard to know for sure how their interaction would play out.