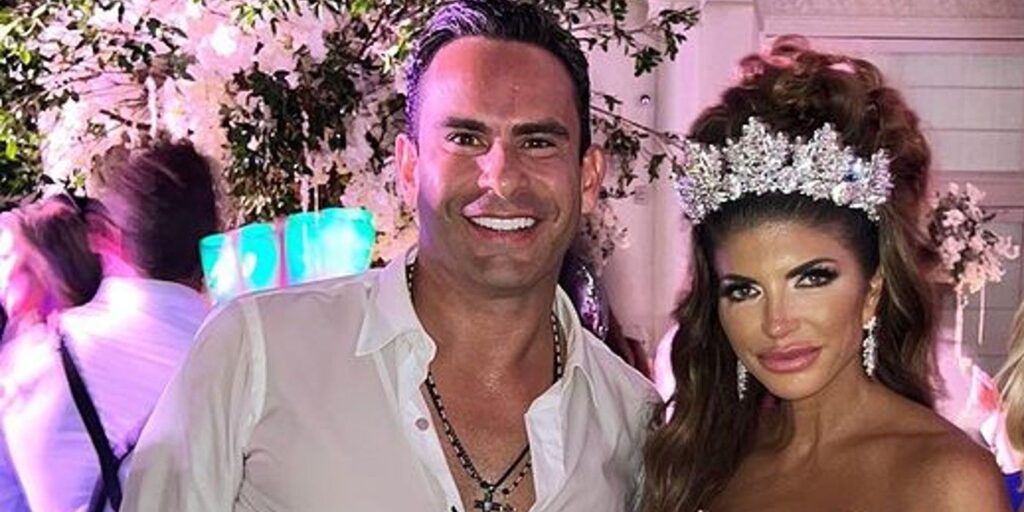 Teresa Giudice from The Real Housewives of New Jersey found her happily ever after, officially marrying her fiancé, Luis Ruelas, on August 6. The newlyweds had a controversial relationship on the Bravo series when the women questioned Luis’ past. Teresa is strong-willed and didn’t let her castmates’ opinions deter her from tying the knot with Luis. The pair’s “love bubble“ continues to grow by sharing their wedding day with family and friends.

Teresa met Luis at the Jersey Shore in 2020 and instantly fell in love. They moved in together a year later, and Luis proposed in October 2021 while he and Teresa were vacationing in Greece. The reality stars were excited to tie the knot and spend the rest of their lives together. Teresa was previously married to Joe Giudice for 20 years but divorced after Joe was deported to Italy. Now the RHONJ star is looking forward to her second marriage with Luis.

Teresa and Luis held their wedding at Park Chateau in East Brunswick, New Jersey. As the “Queen of New Jersey,” Teresa lived up to her nickname, looking like true royalty. The housewife styled her hair in an exaggerated updo, with long, curly extensions flowing down her back. She also added a crystal tiara and diamond earrings to her elegant look. Teresa wore two wedding gowns throughout the night. The first dress Teresa wore was a custom-made Mark Zunino mermaid dress, with sheer gloves embellished with pearls. The designer helped Teresa create a long veil with three hearts and the words, “Sempre Insieme“ embroidered on the bottom. The saying means “always together” in Italian, paying homage to Teresa’s late parents.

Teresa walked down the aisle solo to the song “Ave Maria,” honoring her parents. Luis’ sister, Dr. Veronica Ruelas, officiated the ceremony, which had heartfelt moments, such as the couple’s children lighting a unity candle. Teresa’s four daughters, Gia, Gabriella, Milania, and Audriana Giudice, stood by her side as the maids of honor, wearing pink satin dresses. RHONJ stars Jennifer Aydin and Dolores Catania served as bridesmaids. RHONJ housewives Margaret Josephs, Jackie Goldscheider, and newcomers Danielle Cabral and Jenn Fessler were also invited to the wedding.

For the reception, Teresa, who didn’t sign a prenup, changed into a flower, off-the-shoulder gown with a slit down the side. It was the perfect dress for Teresa to enjoy a night of dancing. Luis donned a classic black and white tuxedo as the groom. Teresa and Luis did their first dance as newlyweds to “I Get To Love You” by Ruelle with a fog machine on the dance floor. The party was packed with entertainment, and a DJ and a band were playing nonstop hits for all of their 220 guests. Teresa and Luis also hired performers for the event, such as a dance troupe that did a routine to “Diamonds Are A Girl’s Best Friend” and various circus acts. Tap Snap even provided a photo booth, capturing memories from the night.

Teresa and Luis’ wedding ended with speeches from the couple’s friends and family, wishing them the best in their marriage. Milania mentioned how she admires her mom’s new relationship and hopes to have a similar one in the future. Gia’s emotional message to her mom referenced Teresa’s parents and how they are watching over her. Teresa and Luis’ loved ones surrounded them with positive energy on their wedding day. Fortunately for Bravo fans, Teresa’s wedding was filmed for a special, premiering next year after The Real Housewives of New Jersey season 13.

Next: RHONJ: Why Teresa Giudice Will Get Her Own Wedding Spinoff