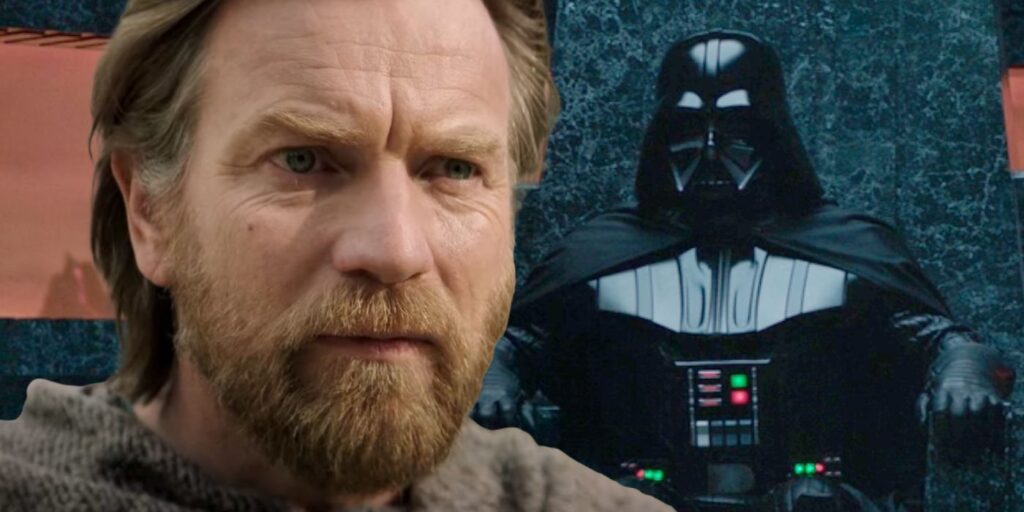 Obi-Wan Kenobi episode 6 featured a cameo from Ian McDiarmid as Emperor Palpatine, and made some big changes to Hayden Christensen’s Darth Vader along the way. The Obi-Wan Kenobi Disney+ TV show is set during the Dark Times of the Emperor’s reign, at the moment when the galaxy seems darkest. Jedi survivors are forced to either abandon the light or hide in the shadows, while the scattered Rebel cells are yet to coalesce into the Rebel Alliance. The two heroes who would become symbols of hope – Princess Leia Organa and future Jedi Master Luke Skywalker – are vulnerable children.

Obi-Wan Kenobi has essentially been about the Jedi Master’s desperation to keep the next generation of heroes safe. Believing Luke to be out of harm’s way on Tatooine, he allows himself to be drawn back into the fray to rescue a kidnapped Leia. Naturally, it isn’t long before he winds up in Darth Vader’s sights. Obi-Wan Kenobi episode 6 features another duel between Darth Vader and Obi-Wan, and the rematch doesn’t go well for the Dark Lord of the Sith. Darth Vader retreats back to his castle on Mustafar, and viewers are treated to one last cameo when he receives a message from Emperor Palpatine himself.

Emperor Palpatine knows all about Darth Vader’s defeat at Obi-Wan’s hands, and he understandably wants to check in – largely to make sure Darth Vader is still committed to the dark side. Ironically, the very attachments that make Anakin Skywalker vulnerable to the dark side have the potential to draw him away from the Sith, and Palpatine is always aware of that possibility. The conversation between Palpatine and Darth Vader is an important one, defining the relationship between the two at this point in the saga, about 10 years after Star Wars: Episode III – Revenge of the Sith.

The Obi-Wan Kenobi Disney+ TV series has shown Darth Vader operating with a great deal of autonomy. Darth Vader serves as supervisor to the Inquisitors, dark side villains who act as Jedi hunters and scour the galaxy looking for Order 66 survivors. He is able to isolate entire worlds at a whim, shut down all flights, and launch an attack on Jabiim without needing to report in. But Obi-Wan Kenobi episode 6 clarifies that this autonomy is simply in terms of interpreting his standing orders. Palpatine is still able to order Darth Vader away from Obi-Wan, perhaps partly concerned his apprentice’s emotions will leave him vulnerable once again. It’s striking that Darth Vader clearly obeys, because Reva had shown the Sith how to draw Obi-Wan out of hiding – simply by kidnapping Leia again. Darth Vader never seems to have done so.

Viewers have long had concerns about whether Obi-Wan Kenobi would cause plot holes and continuity problems in the very first Star Wars movie. Fortunately, although a couple of lines of dialogue are a little more problematic, the series avoids any major problems. It shines a particularly interesting light upon the final confrontation between Darth Vader and Obi-Wan Kenobi, in which the Sith insists he had been but the learner when they last met – but now he is the master. This line takes on multiple shades of meaning now; after all, their “last” encounter is the one in Obi-Wan Kenobi‘s finale in which Darth Vader is handily defeated and again Obi-Wan chooses not to slay him out of mercy. But it also describes Darth Vader’s relationship with Palpatine himself. In Obi-Wan Kenobi, Vader still considers himself a mere apprentice, but by the time of the first Star Wars movie he is confident enough to call himself “Dark Lord of the Sith” and believe himself a near-equal to Palpatine.

The irony, of course, is that Palpatine will never believed this to be the truth. The Emperor was an egotist to the core, and he would have found the very thought that someone could be his equal to be laughable. Indeed, tie-ins have suggested Palpatine only sought out the Chosen One as a potential host in the first place, and considered many possible replacements for Darth Vader because of his defeat on Mustafar. Darth Vader was deluding himself when he claimed to be a master.

Obi-Wan Kenobi features the surprise return of Ian McDiarmid as Emperor Palpatine – his sixth live-action appearance in the role. McDiarmid had teased this in an earlier interview, saying, “[Darth] Vader is back in the new [Obi-Wan Kenobi] television series, so I suppose it’s not impossible that one day his mentor might be discovered once again skulking in the shadows,” he pointed out. (via Star Wars News Net)

Palpatine’s appearance in Obi-Wan Kenobi is quite unusual, with different makeup to anything seen before now. This is because of the Disney+ TV show’s place in the Star Wars timeline. The Emperor has aged significantly since he sustained terrible injuries due to his backfiring Force lightning in Star Wars: Episode III – Revenge of the Sith and that aging has no doubt been accelerated by use of the dark side, which has a corrupting influence on a frail human body due to its unnatural energies. For all that is the case, though, he is yet to age into the form seen in Return of the Jedi, where he is even more wizened and malformed in appearance. He certainly doesn’t look anything like the resurrected Palpatine seen in Star Wars: The Rise of Skywalker, whose spirit had been placed within a clone body that could not fully contain it. That body had decayed so quickly Palpatine was forced to install a form of life-support just to maintain it, and he could not leave the Sith redoubt of Exegol until he found a more suitable host.

All this means the Palpatine of Obi-Wan Kenobi is essentially in a sort of in-between stage. He is no longer the Palpatine of the prequel trilogy, but not yet has he become the monstrous being seen in the original trilogy. Palpatine’s appearance is, therefore, one of the most interesting details in Obi-Wan Kenobi – indicating the passage of time more clearly than anything else involving Obi-Wan and Darth Vader.

All episodes of Obi-Wan Kenobi season 1 are now streaming on Disney+.