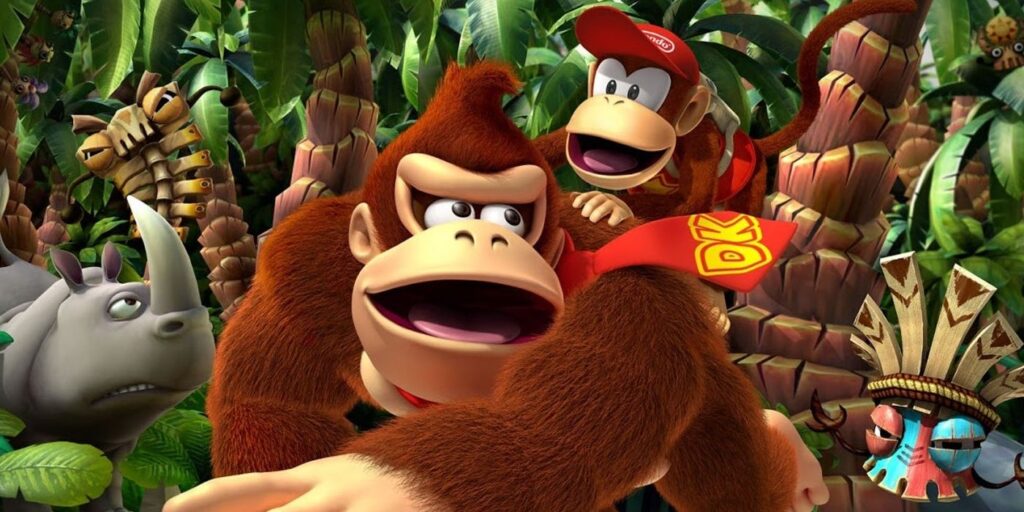 A new Donkey Kong game could have just been confirmed thanks to a recent trademark filing by Nintendo. The barrel-throwing, banana-loving giant ape of gaming legend hasn’t seen a standalone triple-A title since 2014’s Donkey Kong Country: Tropical Deep Freeze for the Wii U, and the last Donkey Kong game in general was Mario vs. Donkey Kong: Tipping Stars in 2015. While DK has made plenty of supporting appearances in ensemble games like Super Smash Bros. Ultimate and the well-reviewed Mario + Rabbids Kingdom Battle expansion, fans have been left wondering when Donkey Kong will return to the gaming spotlight in a brand-new interactive adventure.

While Donkey Kong‘s 40th anniversary came and went last year without any confirmation of a new game, there have been plenty of rumors and clues that Nintendo might have a new DK project or two in the pipeline. A batch of Nintendo-related leaks from last summer hinted at a new 2D-style Donkey Kong game alongside remakes of several classic Legend of Zelda titles. This still-unconfirmed 2D Donkey Kong game was supposedly set to be released during the 2021 holiday season, but sources stated that it was delayed until sometime this year. While Nintendo has yet to make any kind of official announcement regarding this alleged Donkey Kong sequel, some new information has just surfaced that possibly hints at its existence.

Twitter user and Donkey Kong fan Kremling Kampaigner recently noted that Nintendo has updated the trademark for the Donkey Kong franchise, as reported by NintendoLife. While trademarks surrounding popular brands get updated all the time, Nintendo instead filed a brand “new” trademark that makes mention of “downloadable programs for portable and electronic consoles” – leaving many to speculate that the company is getting ready to announce a new Donkey Kong project for the Nintendo Switch. However, it should be noted that this might not necessarily be the case, and that Nintendo could simply be future-proofing its ownership of the Donkey Kong series as it often does with its other gaming properties like Super Mario and The Legend of Zelda.

Even as fans still wait for the announcement of the next mainline Donkey Kong entry, players have kept the gaming icon alive by ranking their favorite Donkey Kong games, sharing some of their less-than-universal opinions of past titles, and creating fan demos of the great ape running across vacant hillsides resembling the ones found in the recent Sonic Frontiers gameplay trailers. Former Nintendo of America president Reggie Fils-Aimé also made mention of Donkey Kong while promoting his recently-released memoir, Disrupting the Game, stating that the 2004 GameCube spin-off Donkey Konga was his most hated game in the series due to its unorthodox bongo controller.

With all of this ongoing discussion of the past Donkey Kong games and the recent celebration of the beloved mascot’s 40th anniversary, many fans are anxious to hear any news about a brand-new standalone DK title for the Nintendo Switch. While Nintendo’s recent trademark renewal might just be a typical legal transaction, it could also be a sign that the king of the jungle is getting ready to swing once more in a new Donkey Kong game.

Next: What A New Donkey Kong Game Needs To Be Great