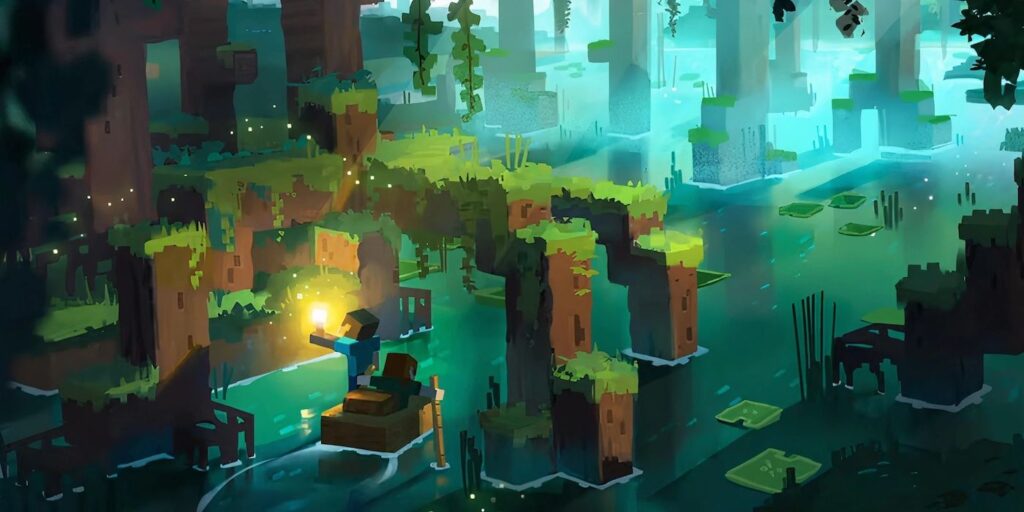 Developer Mojang has revealed that Minecraft’s upcoming Wild Update will no longer update birch forest and swamps or include fireflies. The procedurally-generated survival sandbox game launched back in 2011, but Mojang continues to improve and expand the game with regular free updates. Announced back in October 2021, the upcoming Wild Update for Minecraft will add lush mangrove swamps alongside a terrifying underground region called the Deep Dark.

Last year Minecraft’s Caves & Cliffs Update improved the generation of mountains and underground caves, and this year the Wild Update is meant to further beautify the game’s blocky world. Mangrove swamps are a new variety of swamp made up of large overgrown mangrove trees. The update will add frogs to the game to populate these areas, and players will be able to traverse the water-logged biome with the help of a new chest-equipped boat. The Deep Dark, meanwhile, is a dangerous underground area filled with lost loot and patrolled by a powerful monster called the Warden. Other new content in the Minecraft Wild Update was meant to overhaul old biomes like birch forests and swamps, with biodiversity and immersion being the overarching theme of the whole expansion.

Unfortunately, a recent Reddit post from Minecraft’s Java Tech Lead sliced_lime has led to criticism of the Wild Update. The post outlines Snapshot 22w19a, which gives Minecraft players a taste of new Wild Update content, but fans are not pleased. In the comments Redditors express that the Wild Update is failing to live up to expectations, with some jokingly referring to it as the Mild Update. The update apparently fails to overhaul birch forests and swamps, with atmospheric fireflies being a notable cut feature. The Wild Update’s mangrove swamps are also considered boring and empty, while the Deep Dark fails to reward players who dare explore it.

While the Deep Dark succeeds in creating ambiance and tension, fans feel that ancient cities in the Minecraft Wild Update should contain more enticing loot. Players who find a way into the Deep Dark can plunder chests strewn throughout the area’s ancient cities, but venturing there comes at a great risk. Unsettling Sculk blocks feed on death, and they can also alert the unstoppable Warden to the player’s presence. Facing these dangers currently rewards players with a new enchantment, echo shards, and disc fragments, which many feel are not worth the risk.

Minecraft is known for its frequent free updates, but it seems the Wild Update may not live up to fans’ expectations. Mojang promised that the update would overhaul old biomes and deliver meaningful new ones, but right now mangrove swamps and the Deep Dark seem devoid of meaningful content. The loss of fireflies also leaves birch forests and regular swamps feeling exactly the same, ironically making the Minecraft update feel tame.

Minecraft is available on all platforms.