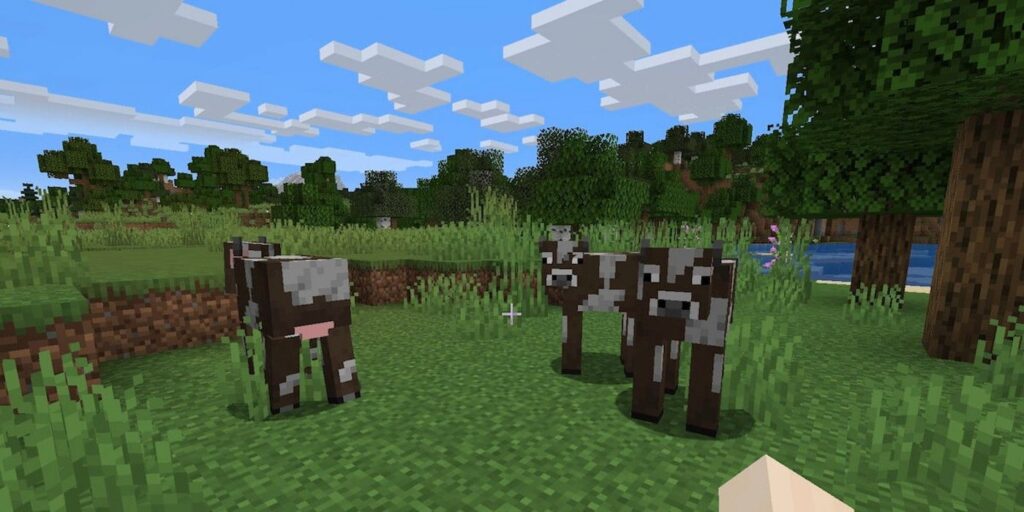 A Minecraft player managed to insert a GIF of a cow dancing in-game with the use of RBG colors. There’s no shortage of creative builds possible in Minecraft, as the game is very much one that encourages user creativity. The devoted community has always been ready to share their latest creations, from sculptures and buildings to fun things they’ve discovered and designed.

Minecraft offers near-limitless opportunities for creative users, making it a popular choice of game among artists and modders. As the Mojang classic continues to update with new items, and players continue to get experimental with Minecraft‘s assets and coding, they discover all sorts of new possibilities not thought to be achievable before. A perfect example of this comes from a player who recently used a mod and simple text commands to transform a typical Minecraft pig into a glowing mob.

Minecraft player and Reddit user dongxipunata used RBG command blocks to put a moving GIF of the “Dancing Polish cow” meme directly into the game. This GIF seems to make use of the base colors red, blue, and green to create the animation in Minecraft. In the comments, dongxipunata explains that the GIF was made possible through animation styles inspired by Moire, Barrier-grid, and stereography. In the GIF, the frames are split up into a repeating stripe pattern, dongxipunata reveals. This becomes more evident the closer the camera moves to the “cow,” where it becomes a series of lines. Command blocks on the left-hand side seem to operate the individual frames of the GIF, playing them in sequence to create animation.

Within the Minecraft community, some players are referred to as engineers, referencing those who continue to push the limits of what can be done with Minecraft‘s code or Redstone items. However, this video could mark the beginning of a new type of player: the RBG engineer. If an animated GIF can be recreated within Minecraft via the use of command blocks, perhaps animation on a larger scale can also be done. Perhaps one day, players will be able to see full-length cartoons and movies inside of Minecraft.

The use of RBG in Minecraft seems to be a relatively new concept as, across social media, there is a very limited number of posts and entries showcasing players utilizing it. Thus it is likely still unknown and not used by most of the community. However, if it becomes more common then this could open doors to a world of new Minecraft possibilities.

Next: How Minecraft’s 1.19 Update Can Make Ancient Cities More Rewarding

Various Types of Hair Extensions: How to Install

A List of Winter Essentials to Consider for Travelling with Baby

The Best Ways To Find A Criminal Lawyers In Your Area

Online Coupons to Save Money

Cotton Bathrobes: The Ultimate Luxury For Your Next Vacation

The Legalities of Online Gambling Enterprises

Different types of best hoverboard and how to ride on them?