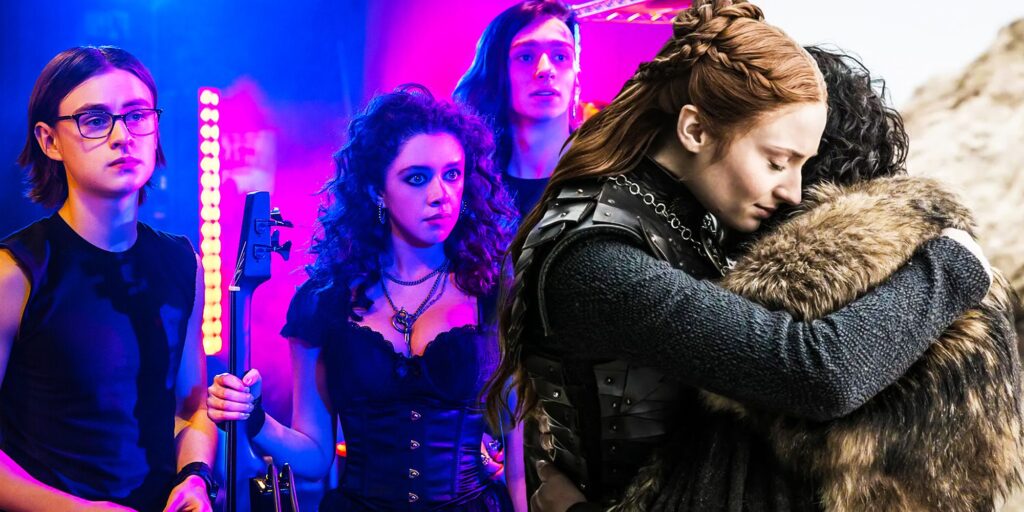 Metal Lords, the new film from former Game of Thrones showrunners David Benioff and D. B. Weiss, helps to explain why the ending of the HBO series was always doomed to fail. Initially lauded for their adaptation of George R. R. Martin’s A Song of Ice and Fire novels, Benioff and Weiss received increasing criticism toward the end of the show’s run. This largely coincided with Game of Thrones outpacing its source books, and the duo taking on a greater level of creative responsibility elsewhere. This resulted in a final season that left even diehard viewers questioning their devotion to the show, and a final episode that will be a mainstay on “worst of all time” lists for years to come.

Despite the negative reaction to Game of Thrones’ conclusion, Benioff and Weiss signed a $200m overall deal with Netflix in August 2019. Penned by Weiss and executive produced by Benioff, Metal Lords is the most high-profile product of this collaboration thus far; a classic coming-of-age story, the movie follows a pair of high school metalheads whose friendship is put to the test as they prepare for their school’s Battle of the Bands contest. With a derivative storyline and cookie-cutter characters, the film is a fairly underwhelming way for Benioff and Weiss to mark their return to the pop culture landscape – but with a thumping soundtrack and a likable cast, the movie is nonetheless an enjoyable watch.

Related: How Did Game of Thrones’ Storytelling Get So Bad?

However, while Metal Lords may be enjoyable enough, its conventional plot and clichéd characterization help to explain Game of Thrones’ stark decline. From the very beginning of its run, the HBO series was built on its subversion of conventional storytelling – most notably the shocking death of supposed protagonist Ned Stark in the penultimate episode of its first season. Combined with its skewering of tropes like the noble knight and the savage barbarian, it made Game of Thrones a disruptive, groundbreaking show. The contrast between the radicalism of Game of Thrones’ early seasons and the conventionality of Metal Lords emphasizes that it was Martin’s story, as opposed to Benioff and Weiss’s own input, that was responsible for making the show such a success. While the duo may have been capable enough at adapting Martin’s work, they ultimately have a very different approach to storytelling – and this means that they simply couldn’t do justice to the show’s earlier seasons when tasked with resolving its complex plotlines.

Although Benioff and Weiss were able to base Game of Thrones’ final seasons on a rough outline of the remaining plot, it is possible that this actually hindered their ability to provide a convincing resolution to the story. With an approach to storytelling far removed from that of George R. R. Martin, the duo may have found it difficult to flesh out the author’s ideas without a clear supporting narrative. This would go some way to explaining a final season in which many things happened, but there was little in the way of character or plot development to explain why. Ironically, while many viewers complained whenever Benioff and Weiss deviated from the source material, it is likely that the show failed precisely because the duo was trying to live up to Martin’s own plan without fully understanding it; a pure Benioff and Weiss ending would have at least had its own internal consistency and coherence, however different from Martin’s original vision.

With Metal Lords having made a limited impression on the entertainment landscape, Benioff and Weiss will hope that their upcoming adaptation of Liu Cixin’s The Three-Body Problem trilogy can propel them back into the zeitgeist. With season 1 expected in late-2022 or early 2023, Netflix will also hope that the series will deliver them a much-needed hit of Game of Thrones-style proportions. And, while Metal Lords shows why the ending of Game of Thrones was always destined to fail, Cixin’s book series is already complete – meaning the writers might finally be able to do justice to a big-budget adaptation from start to finish.