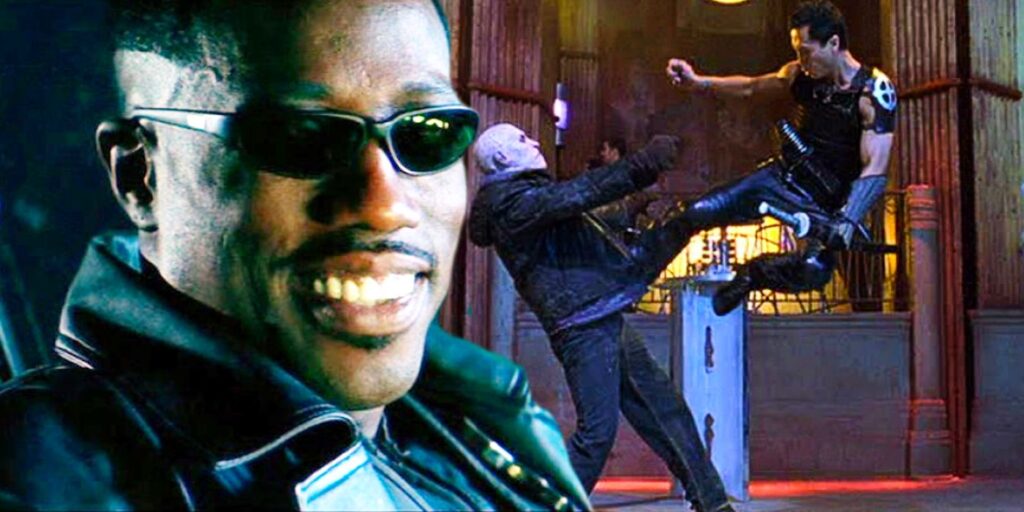 Blade will soon make his debut in the Marvel Cinematic Universe, and the martial arts fight scenes of the Wesley Snipes Blade movies will be its greatest challenge to overcome. The MCU’s reboot of Blade was first announced at 2019’s San Diego Comic-Con, with Mahershala Ali revealed as the vampire hunter. Following Ali making a voice cameo in Eternals as his first in-universe portrayal of Blade, Marvel’s Blade is on its way to theaters in late 2023, bearing the title of The Blade.

Snipes has voiced his support for Ali succeeding him as the MCU’s Daywalker, but even absent the involvement of Snipes, the Blade movies he anchored will surely have a great impact on the MCU’s take on the character. Part of that lies in the impact the original Blade have in making the character a very mainstream superhero at a time when he was not a widely known character. However, the Blade movies set another major hurdle for any reboot to face in the style of their fight scenes.

RELATED: Who Is Blade’s Villain? Every MCU Character Theory Explained

Blade was an R-rated movie – as was Blade II  – unlike Marvel’s Blade. The original films were also released when superhero movies were gradually starting to catch on but had not yet come to be as dominant a genre as they’ve become. That meant that Blade and Blade II were essentially sold more as Hong Kong-style action movies that happened to feature vampires and be rooted in Marvel Comics. And while Blade: Trinity is still remembered as a disaster, the first two Blade movies accomplished that goal in spades – making the toughest challenge for the new movie that of matching up with its predecessors.

It is easy to take great fight scenes for granted in contemporary superhero films, but Blade arrived on the scene when engaging fight choreography was rare even in superhero movies of its era. In addition to re-shaping Blade’s backstory, Blade and later Blade II were nothing short of light years ahead of their time with absolutely fantastic martial arts and swordplay. Blade II even doubled down on the Hong Kong influences of its predecessor with Donnie Yen as fight choreographer, and the two together set a very high standard for the MCU to rise to in its Blade reboot.

Fortunately, Shang-Chi and the Legend of the Ten Rings similarly took a Hong Kong-style approach to its martial arts battles and succeeded greatly as the first proper martial arts film in the MCU. Marvel has also hit the mark with its martial arts fight scenes on a few other properties, most memorably in the three seasons of Daredevil on Netflix, so there is reason to expect the MCU can rise to the challenge, which is good news. As part of the influence of the Wesley Snipes Blade movies, Blade’s outstanding fight scenes in his first two cinematic vampire hunts cannot be overlooked.

As the first Marvel-based movie to be a hit in theaters, Blade will always be highly respected by superhero movie audiences, as will the arguably better Blade II. The Daywalker also set the standard for superhero fight scenes that would take a long time to ever be subsequently met. No other aspect of Blade’s legacy will be more important or daunting for Marvel’s Blade reboot to match than that.

NEXT: How Eternals’ Credits Scene Sets Up Blade’s MCU Future