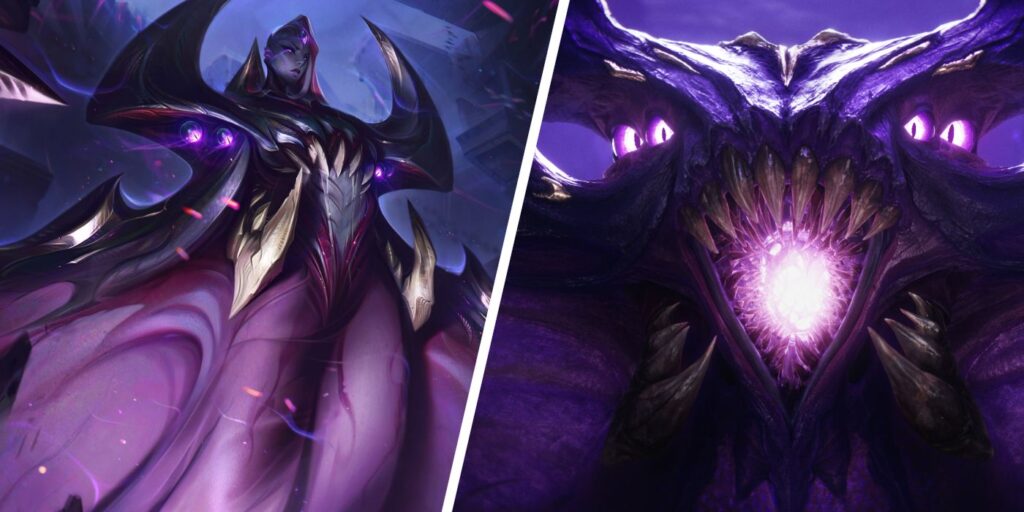 Bel’Veth, also referred to as The Empress of the Void, is a Champion in League of Legends whose main role is a team’s Jungler, the player who gains their experience solo from hunting the neutral creeps of the Jungle located in between the lanes. Due to her kit, she excels in this as Jungler and would be therefore impaired in her capabilities if placed elsewhere. Nevertheless, wherever players choose to play her, understanding how her abilities work in League of Legends and what builds are suitable for combat is essential for dominating the enemy team.

Death in Lavender is Bel’Veth’s innate Passive, providing her with bonus Attack Speed and other buffs. This passive becomes more powerful as she consumes stacks of Lavender, acquired by scoring a takedown against a Champion, Monster, or large Minion. In other words, Death in Lavender can only grow stronger and receive more stacks efficiently only when Bel’Veth is getting killing or Jungling neutral creeps. Since this Passive does not grow through leveling, using her in-lane would defeat the purpose of Lavender stacks.

Void Surge is Bel’Veth’s Q Ability, allowing her to deal damage while dashing in one of four directions. This Ability has a low cooldown and also resets her Basic Attack timer; therefore, players will need to utilize Void Surge as their “spamming attack” in League of Legends combat. However, it will take some time to practice managing Bel’Veth’s positioning to properly use this Ability in both offensive and defensive scenarios. Needless to say, players should max Void Surge first before any other skills.

Above and Below is Bel’Veth’s knock-up W Ability and should be used for CC in combat. Landing Above and Below is crucial in executing Bel’Veth’s attack combo since it resets Void Surge in the enemy’s direction, allowing her to dash towards the target. Next, Bel’Veth’s E is Royal Maelstrom, which functions somewhat similarly to Fiddlestick’s Bountiful Harvest, granting her HP regen based on her damage. Royal Maelstrom is her primary source of sustain in battle and should be the second Ability that players max out.

Finally, Bel’Veth’s Ultimate, Endless Banquet can be compared slightly to Aatrox’s World Ender. She is able to consume Void Coral from takedowns and assume her True Form in League of Legends, dealing explosive True Damage in the process. The goal is to score kills as quickly as possible in this form to continue the feast of power, prolonging the Ultimate’s effects and furthering her devastation upon the enemy.

Below are the recommended Runes and Item Build for Bel’Veth in League of Legends:

Next: League of Legends Rengar Mini-Rework Smooths His Mechanics & Ferocity

League of Legends is available on PC.