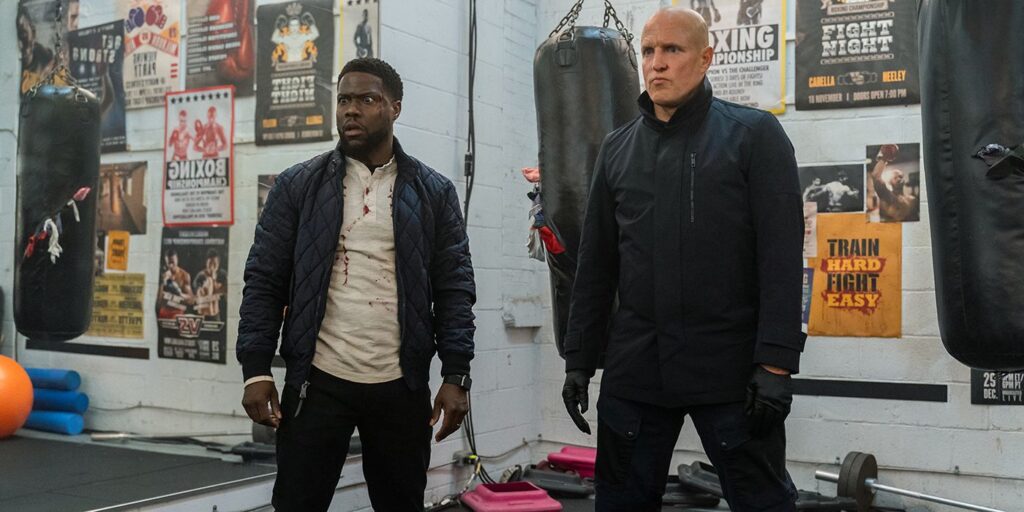 The Man From Toronto, arriving on Netflix June 24, is an action-adventure and a buddy comedy rolled into a mistaken identity caper. Directed by Patrick Hughes of The Hitman’s Bodyguard fame, the new film stars Kevin Hart as the hapless Teddy and Woody Harrelson as the all-too-capable assassin whose codename matches the title of the film.

In the middle of struggling to get his groundbreaking idea for a non-contact boxing gym off the ground, Teddy tries to surprise his wife (played by Jasmine Mathews) with a retreat. His plan – like almost all his plans – quickly goes astray when he is mistaken for “The Man From Toronto” and must adapt or die. Naturally, the real assassin is none too pleased that he must coach Teddy through the ordeal in order to maintain both their covers. The film also stars The Flight Attendant‘s Kaley Cuoco in an unsurprisingly charming role.

Related: Kevin Hart Pretends To Be Woody Harrelson In The Man From Toronto Trailer

Screen Rant spoke to Hart and Harrelson about what made non-contact boxing such a perfect fit for Teddy, what they would do in a similar situation, and just how one should pronounce “Toronto.”

Screen Rant: I had never heard of non-contact boxing, but it turns out to be very real and useful. Did you bring that to Teddy, or was it a happy coincidence that you’re both good at boxing?

Kevin Hart: They know that I’m familiar in the space of boxing, so they added the non-contact beat, just because we saw some fun in it. We felt that Teddy being passionate about something as ridiculous as non-contact boxing [was funny].

Not to say it’s ridiculous to those that embrace it. We’re saying for Teddy, in the world of what he thought it could be for the gym franchise, we just thought it added a nice funny layer.

Woody, no one can question your comedy credentials from Cheers to White Men Can’t Jump, but you really get to let loose here as an assassin that is assassinating the usual tropes. Can you talk about what was the most fun when it comes to your character?

Woody Harrelson: I felt myself more or less the dramatic relief in this, and Kevin’s just about as funny as I’ve ever seen him. But you reminded me of that non-contact boxing, and the first time he’s doing that. Because he’s so well-trained, he could get as close as you can be.

It’s so hard not to laugh. But that was true throughout the production.

The film teaches us many things about following your dreams, the value of friendship, and also probably what not to do when you are mistaken for a professional killer. What do you think is the number one lesson you have taken away on what you should not do if you’re ever in Teddy’s situation?

Kevin Hart: Oh, my God. What’s the number one thing that you should not do?

You’ve got to understand Teddy situation. I think the biggest thing for Teddy is when you use or understand the phrase “Teddy-ing it,” which is what his wife referred to. I would say the biggest thing you should not do is probably Teddy things, which is the traditional lapse in judgment; the trial and error of making simple things [into] just bad things. That’s something that you should not do.

Avoid the simple problems, because they become the big problems. Teddy’s relationship problems all started off as simple things, but they just grew and manifested into so much bigger. That’s what you should not do. You should not mess up.

Woody Harrelson: There comes a moment, before Teddy becomes The Man From Toronto and starts to fake it, where [he] ends up going to the wrong location because [of] the numbers he can’t see, right? He goes to the wrong location where he’s taking his wife on a little getaway. He goes, meets the guy at the door, and it looks kind of rough. But this could happen.

Next thing you know, he’s downstairs, amongst some real tough people. And he sees, in the middle of the room, a guy hanging and already bloody. What you should not do is just stay at that moment. Fast and furious, just run the hell out of there.

That is one of the funniest scenes, to see him just start to fake it. That’s about as funny as it gets.

I was gonna how you guys pronounce the last word in the title, because I just learned this weekend that apparently when you’re from Toronto, you [don’t pronounce the second t].

Kevin Hart: But he can’t say it, because it’s a title and a name. It’s not as if we’re supposed to be well-versed on the word. Our characters aren’t supposed to have the cadence.

A case of mistaken identity arises after a screw-up sales consultant and the world’s deadliest assassin—known only as The Man from Toronto—run into each other at a holiday rental.

The Man From Toronto premieres June 24 on Netflix.