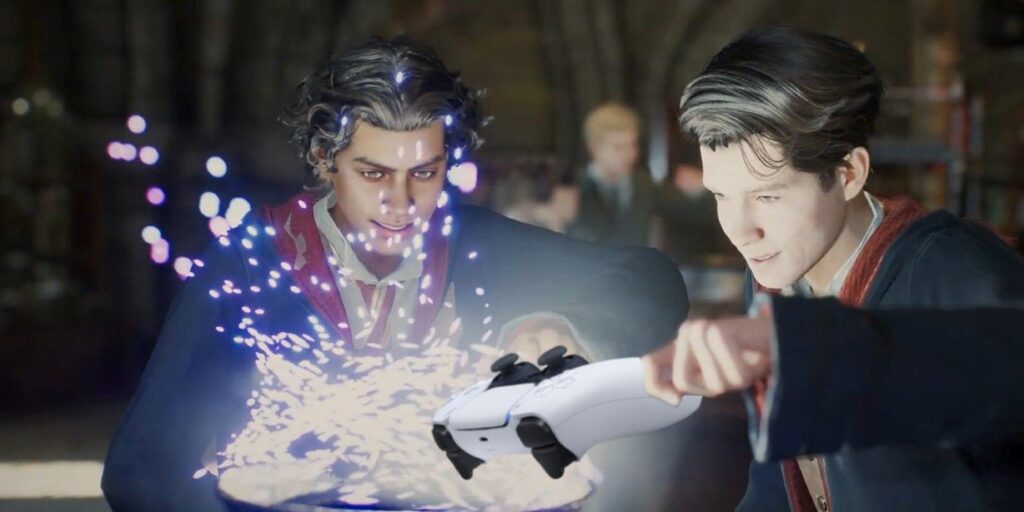 In a recent PlayStation Blog post, WB Games revealed some information on how Hogwarts Legacy will take advantage of the DualSense controller’s unique features, which might make the Harry Potter game feel almost as though it uses a real wand. Very few games have made much use of the DualSense’s features; even fewer of those games are third party. Death Stranding was the PS5’s best DualSense showcase yet. However, it seems like Hogwarts Legacy may be able to give it a run for its money.

Hogwarts Legacy was revealed in September 2020 and is planned to be released for PC, PlayStation 4, PlayStation 5, Xbox One, Xbox Series X/S, and Nintendo Switch. Despite coming to all platforms, though, Hogwarts Legacy has always had a stronger connection to PlayStation. The initial reveal trailer premiered at a PlayStation State of Play event. In March, the game even got a dedicated State of Play showcase that showed off gameplay for the first time.

With the marketing that Hogwarts Legacy has gotten working with PlayStation, it seems the developer is using the DualSense to ensure the PS5 version is even more immersive than other consoles, a trend that could continue for what looks like a Hogwarts Legacy trilogy. Hogwarts Legacy will utilize DualSense features like the light bar, haptic feedback, and adaptive triggers. These features will adapt depending on what spells the player is casting.

In addition, the DualSense’s haptic feedback and adaptive triggers let players feel the weight of the spells they are casting. These effects are isolated to the right side of the controller, which immerses right-handed players, but raises concerns that on PS5, Hogwarts Legacy punishes left-handed players. On the right side, players will feel resistance when casting spells, an effect that will be especially apparent when charging up a particularly powerful spell, or using a defensive spell where damage is being absorbed.

On PlayStation 5, Hogwarts Legacy may be one of the more ambitious third-party games when it comes to the utilization of the DualSense controller. Players’ spells and house colors light up the controller’s light bar, and the adaptive triggers and haptic feedback make players feel every spell they cast. Overall, PlayStation 5 seems like it will be the most immersive place to play Hogwarts Legacy when it releases in Winter 2022.

Next: How Hogwarts Legacy’s Villain Is Related To A Harry Potter Death Eater