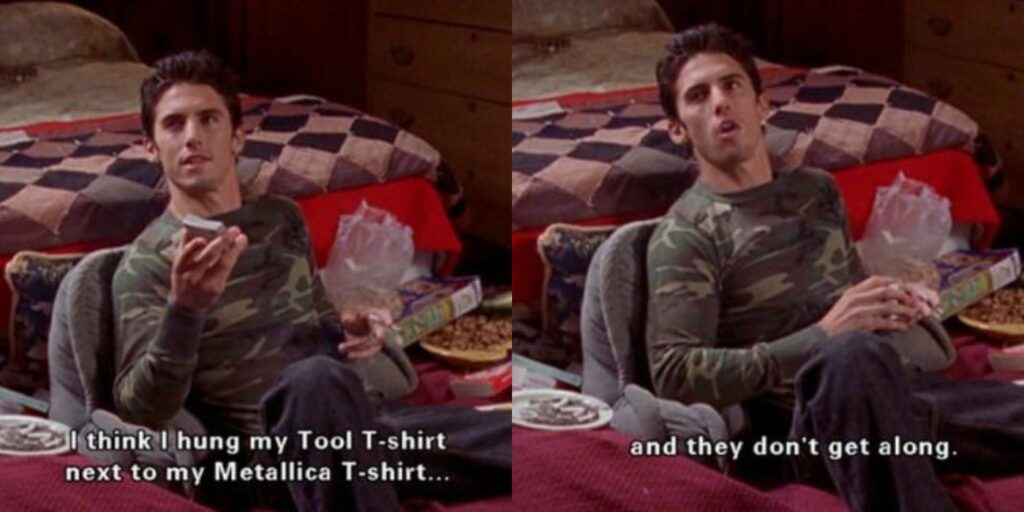 Jess Mariano (Milo Ventimiglia) was the Gilmore Girls version of the notorious bad boy: dark hair, surly attitude, the-world-can-bite-me outlook, and sarcastic charm. He was Rory’s (Alexis Bledel) second boyfriend in the series, and the only boyfriend who shared many of the same interests as she did — most importantly, their love of books.

When he first came to Stars Hollow to live with his Uncle Luke (Scott Patterson), the Stars Hollow residents immediately detested the outsider, especially when he went out with Rory. Yet, as the seasons passed, Jess grew up and made something of himself. Along the way, however, he’s made memorable remarks that reflect his personality (and remind fans why we love Jess).

Updated on June 22nd, 2022, by Lynn Gibbs: Jess Mariano has diehard fans and haters. As one of Rory’s “bad-boy” boyfriends, he wasn’t always the best influence in Rory’s life but he was exactly what she needed at that time. She needed someone to push her out of her comfort zone and explore the world outside of Stars Hollow. Outside of being a love interest for Rory, he was Luke’s nephew. Watching that bond grow over time was more rewarding than Jess’ on/off relationship with Rory. As an intellectual and lover of sarcasm and books, Jess had some amazing quotes throughout Gilmore Girls.

Jess’s arrival in season 2 started with a bang. He was somewhat pensive and angry — the typical TV bad-boy. When he mentions his t-shirt fiasco, it’s to avoid talking to his mother. It’s clear Jess has a complicated family life and resents being sent to Stars Hollow, but this humorous excuse is memorable as part of the introduction to Jess’s personality and sarcastic out-of-the-box thinking when it comes to excuses.

In any case, Jess is the typical bad boy from the attitude to the cigarettes to the way he loathes Stars Hollow — until he meets Rory.

Jess did plenty of nice things for Rory throughout their relationship but his patience ran thin when Rory remained friendly with Dean. Just as Rory was friends with Jess when she was dating Dean, she was now friendly with Dean while dating Jess, which made him insecure.

In one episode, Rory and Jess planned on going to a winter festival as a couple but they got lumped into attending with Dean and his little sister. Rory had a great time but Jess, on the other hand, referred to Dean’s younger sister as Stuart Little, which made Rory laugh.

When Jess and Rory started dating briefly after her breakup from Dean, it took Dean some time to come around to viewing Rory as a friend instead of a girlfriend. The two did eventually become friends again, which only made things awkward for her new relationship with Jess.

In one scene, Dean popped out of nowhere to talk to Jess while on a quiet street, which made Jess reminiscent of West Side Story. In this scene, roles were reversed. It was now Jess dating Rory while Dean flirted with her as a close friend.

Jess and Dean’s rivalry was the love triangle of Gilmore Girls. In ‘A-Tisket, A-Tasket,’ Jess outbids Dean for Rory’s picnic basket, and by Stars Hollow tradition, earns Rory’s basket and her company in exchange. Dean, furious, pleads with Rory not to go but she does anyway.

In this episode we see Jess is ready to battle Dean for Rory’s affections and succeeds in connecting with her, the episode ends with Rory calling Jess and the two falling into easy conversation. If anything, this was the episode that launched the will-they or won’t-they chemistry between Jess and Rory.

Jess can capture what viewers succinctly feel in certain moments. While this was his response to Rory who was upset at the idea of being the poster girl for censorship at Stars Hollow’s version of a Blockbuster, it can be applied to just about anything in life. Jess had smart quotes for those who listened.

From what’s acceptable to the outraged feelings people can get while stuck in traffic or when a favorite restaurant is out of a beloved dish for the day. Whatever the reason, viewers can  fall back on Jess’s simple “It’s a crazy world we live in.”

Gilmore Girls would have been dull without Jess. Jess added new energy to the show and an element of danger and mystery to Rory’s life, opening her eyes to new experiences and ideas both good and bad.

Jess changed Rory’s life and is part of the reason Rory became who she is. If Jess had never existed, Rory never would have done things like skipping school or dating someone her mother didn’t approve of. Then again, if not for Jess, she never would’ve gone back to Yale and fulfilled her dreams, either. His positive presence in her future made fans believe Jess and Rory were soulmates,

Who could forget Jess making fun of Luke with the flannel shirt and backward hat combo? When Luke admonishes Jess’s choice of attire, Jess later makes a point of making fun of his uncle, much to our amusement.

This happened at the beginning of Jess and Luke getting to know one another, showing viewers a fun, sarcastic kind of relationship between the two that eventually grows into a meaningful bond throughout the series. It’s rare that viewers ever see Luke without flannel or a backward hat, so Jess did have a hilarious point. For many, the relationship between Jess and Luke was better than Rory and Lorelai’s.

Jess was having a bad night in this particular episode, but this quote was quite thoughtful. After all, he’s telling Rory how much she means to him in his own way. Although Jess was seen as Star Hollow’s bad boy, he wasn’t interested in the party scene and would rather be elsewhere with Rory than at a house party.

RELATED: Who Was Better For Rory On Gilmore Girls, Jess Or Dean?

Sadly for Jess, this night only got worse for him when he and Dean go into a physical fight over Rory. The fight also altered his relationship with Rory because it was as if things were never going to be simple for them.

All fans remember the moment. Jess is back in town and he chases Rory down to tell her one thing: he loves her. The sad truth is, it’s too late. What’s even worse, Jess drives away before a shocked-into-silence Rory can respond.

While the two have a complicated history and remained friends, it’s clear the feelings still existed between the two. At the end of the original series, Rory ended up with Logan but she turned down his proposal. This gave Team Jess fans hope for the revival but it was one of the saddest things about Jess that Rory continuously turned him down.

Luke never heard “beaked” as a verb until Jess described the unfortunate source of his black eye. The black eye is blown completely out of proportion when Rory believes Jess got into a fight with Dean, which results in a fight between her and Jess instead.

They make up, but the funny thing is Jess only tells Luke the real reason why he’s sporting a black eye, too embarrassed to tell Rory or anyone else. This is also one of Jess’s funniest moments. He may be rebellious and cool, but even he’s not immune to violent run-ins with a swan.

This could be Jess’s life motto, even if he was saying it sarcastically. It’s no secret Jess came from a troubled family background and experienced anger and resentment to varying degrees, resulting in his bad-boy tendencies and teenage rebellion.

Jess allowed his experiences and background to hold him back at times. However, he was incredibly bright, sharing literary references with Rory often. Rory pushed him and convinced him that he could do and become more. Thankfully Jess took the advice and encouragement; he outgrew his setbacks and showed everyone that he could be good without permission.

It was Jess who gives Rory the idea to write a book about her life with her mother in the reboot. Jess turns out to be pretty good at giving advice, and even better at getting Rory back on track when she’s gone off her path. In a way, Jess is a navigator, guiding Rory at different times in her life.

Jess could be defiant and rebellious, but also sincere and profound in his own way. He grew up a lot throughout the series, learning the hard way but turning his mistakes around and creating a life and various successes for himself. Though of course, he hasn’t lost his sarcasm, wit, or bad boy charm. And while Jess turned into a successful young man, fans still have unanswered questions about his character in the reboot, A Year in the Life.

NEXT: Questions Fans Still Have About The Characters On A Year In The Life