Evolution Of Engagement Rings- From the 1920s to Now 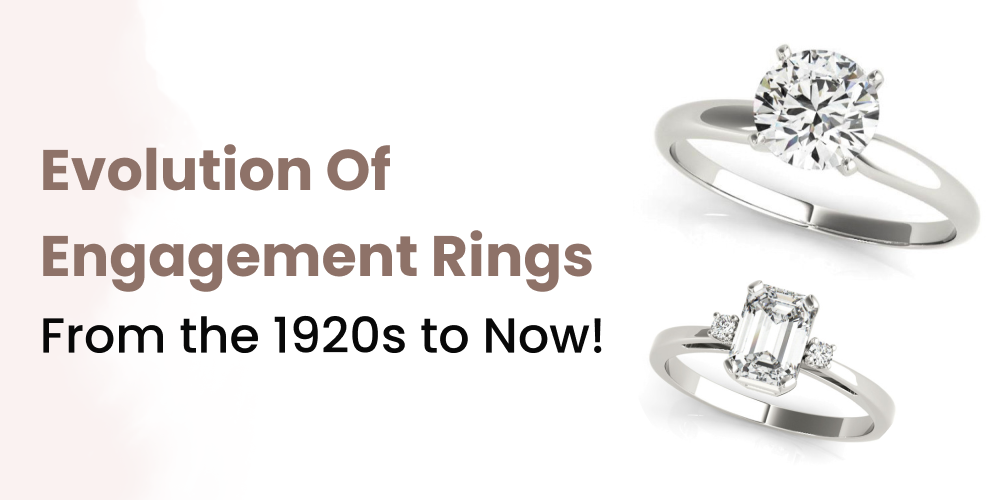 A century is long enough for engagement rings to undergo a drastic change in style and design. The solitaire diamond ring may forever remain a classic. But some have opted for the unconventional route and selected rings that have set trends.

The current trends reflect in the choice of engagement rings. A simple look into your mom’s or aunt’s engagement ring, and you will know what the style was then and what it is today.

Let us see the evolution of engagement rings in the past century. Here, we take you through the journey from the 1920s to the present 2020s. Are you interested? Let us start now.

The Art Deco style in decorative arts and architecture originated in the 1920s. You might be surprised that the Art Deco movement had a profound influence on the design of engagement rings. The halo rings with a high-carat diamond in the center surrounded by smaller diamonds outside were popular in the 1920s. Other than the round solitaire, the emerald-cut and Asscher diamonds rose to prominence. These were accentuated by the halo settings.

By the 1930s, the engagement rings had evolved in design and style. The Great Depression took over in the late 1920s and sent the world to panic. The design was no longer associated with the Art Deco influence. Even though the solitaire diamond remained the center of attraction, the surrounding style changed from halo to ribbons and bows. For the people who could not afford a big rock, satisfaction was in the form of a small solitaire in the center. It was surrounded by two small diamonds on either side Salt And Pepper Diamond.

By the late 1930s, the world was still reeling under the effect of an economic downturn. The engagement rings in the 1940s now saw single solitaires but not surrounded by smaller diamonds. Instead, the diamond was surrounded by patterns of gold design. The platinum got replaced by yellow and rose gold. Also, the golden age of Hollywood was at its peak in the 1940s. It saw the emergence of romantic designs on the engagement rings like flowers and bows. It was also during this decade that DeBeers’ tagline “A diamond is forever” became famous. The engagement proposal became more of a man’s commitment test by judging the size and shine of the diamond on his selected engagement ring.

The 1950s saw people imitating famous film celebrities. The engagement ring selection was no different. Audrey Hepburn’s engagement ring was a stackable three shades ring of platinum, yellow gold, and rose gold. The world war ended and the demand for platinum engagement rings continued. The solitaire rings surrounded by two smaller diamonds on either side also rose in popularity.

1960s- It was colored gemstones all the way

The classic solitaire remained in style in the 1960s. But the style-savvy and adventurous tried experimenting with engagement rings that had colored gemstones in addition to diamonds. Jackie Kennedy’s engagement ring from John F. Kennedy featured a 2.88-carat diamond and a 2.84-carat emerald offset relative to each other. Numerous marquise-shaped diamonds in the floral arc were also set on the ring.

During the 1970s, brides started to match their engagement rings to wedding bands. The princess and emerald-cut diamonds set against new modern styles and designs emerged in this decade.

In the 1980s, unique pear-shaped diamond engagement rings came into vogue. The sheen of the yellow gold continued. The blue sapphire gemstone got a new lease of life thanks to Princess Diana’s engagement ring. Her engagement ring was a solid 12-carat oval blue sapphire surrounded by fourteen diamonds. The royal ring became so popular that all jewelry stores had replicas made and displayed.

The 1990s witnessed diamonds set in white gold. It also heralded the arrival of pop culture, and with it came the grunge style. The rings became bolder and sharper. The marquise cut diamonds were fashionable in the 90s.

The 2000s heralded a new era. It saw the reemergence of the classic solitaire ring. A new symbolism for the three diamond rings was advertised. It represented the couple’s past, present, and future. The brides opted for different cuts like the princess cut and the emerald cut.

The cushion-cut diamond became a rage in the early 2010s. The halo of small diamonds surrounding a large solitaire that was a hit in the 1920s became popular again. Prince William proposed to Kate Middleton with his mother’s sapphire ring in 2010. The colored precious gemstones became the trend again. The sapphire ring surrounded by small diamonds saw brisk sales.

Are you interested in buying an engagement ring in Houston? What is your choice? An oval-shaped diamond solitaire or a cushion-shaped rock? Whatever your selection, you will find a large variety of rings in a good jewelry store in Houston. Also, you can opt for innovative designs or the latest trends.

Say you care before the year ends with these 5 flowers