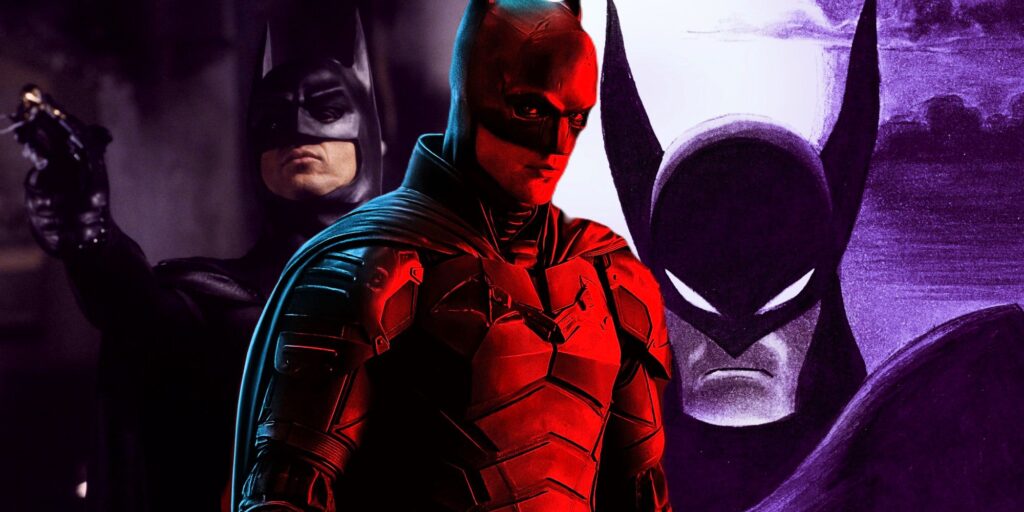 With several movies and TV shows on the way, Batman remains DC’s flagship hero. Whether it is in comic books or movie ticket sales, Batman has proven more than once that he is a guaranteed profit IP. As the future of the DCEU slowly takes form, and Warner Bros.’ Discovery merger rethinks priorities, one thing is for sure: the Dark Knight will continue to be in the spotlight. Here are all the Batman movies releasing in the future, as well as movies and TV shows starring other infamous Gothamites (like the Joker in Joker: Folie à Deux).

The Batman, the first solo Batman film since Nolan’s The Dark Knight Rises, proved that there are still caped crusader stories to be told despite the countless reboots. At the same time that Robert Pattinson’s Batman shows its strengths to the audiences, Ben Affleck’s version of the Dark Knight currently continues to be the Batman of the DCEU, but Michael Keaton’s Batman returns in The Flash. Batgirl would also have featured Keaton’s Wayne, but given its sudden post-production scrapping by WB Discovery, it’s no longer a prospect.

Batman is a tentpole movie character through and through, but the characters’ impact on pop culture goes far beyond the big screen. Between theatrical releases, live-action TV shows, and animated series, options abound for where audiences can see Batman or his universe in the next few years. Here is a breakdown of every Batman movie and TV show in development.

The next three Batman appearances aren’t in Batman movies – and they’re not all the same Batman. Batman’s next appearance in the DCEU, played by Ben Affleck, will be in Aquaman 2. The Aquaman and the Lost Kingdom release date is 17 March 2023, and it’s been confirmed that Ben Affleck’s Batman (Batfleck, as fans refer to him) will feature in the movie. While there’s a lot of information out there regarding the controversial and delay-addled Aquaman sequel, news of Affleck’s involvement came relatively late in the film’s production, not being revealed until 2022. The extent of Batman’s part in Aquaman and the Lost Kingdom isn’t known. It could just be a cameo, or Batman could be heavily important to the plot of Aquaman 2. All that’s known is he’s definitely in it, and he’s being played by Ben Affleck.

As strange as it sounds, The Flash can be considered an upcoming Batman-related project. In fact, the film will feature not only one but two versions of Batman, Ben Affleck’s and Michael Keaton’s, thanks to the possibilities of DC’s multiverse. Despite being the very first live-action Flash solo movie, The Flash is shaping to be an event-type film that will see many important DC characters such as Supergirl and Man of Steel‘s General Zod. On top of delivering a good Flash story that also serves the current needs of the DCEU canon, The Flash also has the mission of providing a send-off for Ben Affleck’s Batman and setting up Michael Keaton’s forthcoming role in the DCEU. Michael Keaton was set to be the Batman who mentors Batgirl in the Batgirl movie – and, somewhere on a cutting room floor, he still is, but audiences will now never see the film. Batman’s future in the DCEU will resultingly start in The Flash. Fans won’t have long to wait to see this either, as The Flash movie release date is set for 23 June 2023.

Joker: Folie à Deux is pegged for release on October 4, 2024, heralding the return of Joaquin Phoenix’s Oscar-winning Arthur Fleck. Despite Joker serving as the perfect example of a standalone Elseworlds DC movie, the financial success of the film would naturally call for a sequel. Joker director Todd Phillips announced the Joker sequel was official in 2021 and titled Joker: Folie à Deux, and Lady Gaga will play Harley Quinn in a role that should show off her theatrical strengths. There have also been reports that Joker 2 will be a musical (via The Hollywood Reporter), which would make sense given Gaga’s involvement. Since a young Bruce Wayne was in Joker, another Batman/Arthur Fleck encounter might be possible depending on how long after Joker the sequel is set.

Related: The Batman 2 Has Already Set Up DC Movies’ Most Dangerous Joker

Even before The Batman premiered, possible spin-offs for HBO Max were already being discussed. Initially, it was announced that a Gotham P. D. show was going to be produced for the streaming platform, but, following the departure of the original showrunner Terence Winter, the Batman spin-off show turned into an Arkham Asylum project. While no release date has been announced yet, Matt Reeves has revealed that the show will lean into the horror aspects of what a place like Arkham could be like coming out of The Batman‘s events. By that description, and considering The Batman‘s deleted Joker scene, the Arkham spin-off could be where audiences get a better look at Barry Keoghan’s Joker.

On top of the Arkham Asylum show, there is also a Penguin spin-off series being developed for HBO Max. In fact, things seem to have been working out quicker for The Penguin, as there is already an official press release that confirms the return of Colin Farrell. It is still not clear whether The Penguin will take place before or after the events of The Batman.

Batman’s mythos continues to be explored on TV as a Gotham Knights TV show will arrive on the CW for the 2022-2023 season. Unlike the upcoming game of the same name, Gotham Knights will not focus on big names like Nightwing, Batgirl, and Red Hood but rather on a mixture of original characters and lesser-known Gotham heroes such as Stephanie Brown and Harper Row. The story follows Batman’s adopted son teaming up with other Batman sidekicks and protégés to investigate the murder of Batman. The Gotham Knights release date is penciled in for 2023, but this could change given the current uncertainty at the CW.

Related: Everything We Know About Gotham Knights’ Batman Spin-Off

Batman: The Animated Series may have ended a long time ago, but the show has a spiritual successor in Batman: Caped Crusader. The new animated DC production is being developed for HBO Max and Cartoon Network by Batman: TAS‘ creator Bruce Timm, J.J. Abrams, and The Batman‘s director Matt Reeves. Batman: Caped Crusader, the first Batman animated solo TV show since Beware The Batman, will initially have ten episodes.

After the success of The Batman both between critics and at the box office, a sequel to Matt Reeves’ Batman reboot was a given. While a release date has not been announced yet, The Batman 2 is happening with director Matt Reeves and start Robert Pattinson set to return. Story details are still not known, but there is no shortage of options as to where Reeves can take his Batman next. The end of The Batman, for example, sets up a new version of the Joker being locked up in Arkham Asylum and a possible No Man’s Land adaptation with Batman’s rogues’ gallery taking over a fallen Gotham. Of all the upcoming Batman outings, this is the only one that’s a solo Batman movie and is understandably also one of the most eagerly anticipated.

Batgirl was suspiciously absent from San Diego Comic-Con 2022 given its slated release date in the same year, and it soon became clear as to why: it’s not coming out. Originally scheduled exclusively for streaming on HBO’s platform, the movie that would’ve introduced Leslie Grace’s Barbara Gordon was canned (despite being finished) as part of Discovery’s WB and HBO Max acquisition. Warner Bros. Discovery CEO David Zaslav stated via Variety that “we’re not going to put out a film unless we believe in it,” which suggests that “finished” was not quite the same as “release-ready” in this case. However, Discovery is also shifting HBO Max more thoroughly to non-scripted programming and event pictures, a move that has seen Batgirl and Scoob! Holiday Haunt shelved indefinitely with hints of more release-slate carnage to come. It’s unclear how the DCEU will reframe itself after losing an entire movie that reintroduced a classic Batman to the DCEU. In the era of multiverses, scrapping one movie involves making significant changes to the others. A #ReleaseTheSnyderCut-style campaign might resurrect it in the future. For now, however, Batgirl‘s tenure is over.