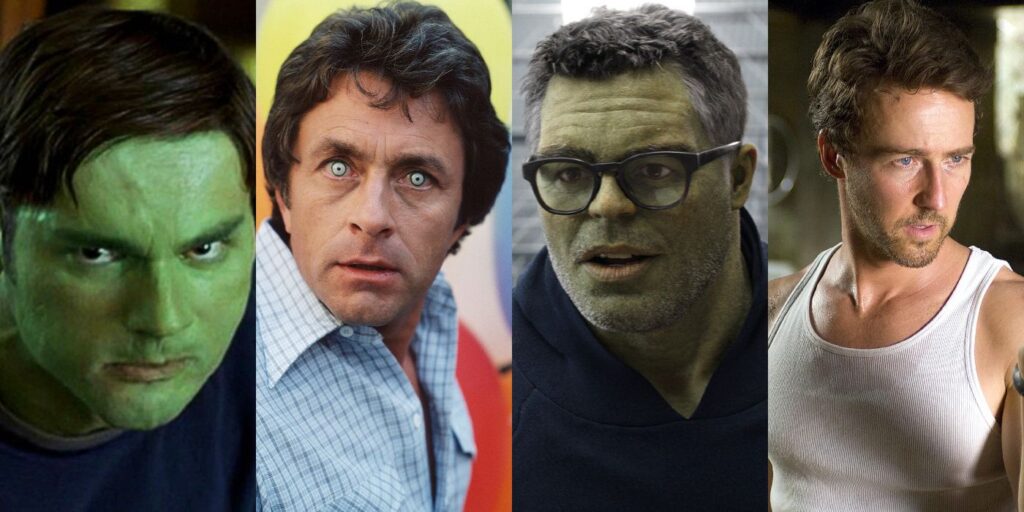 The Incredible Hulk is Marvel’s most smashing superhero, and here’s every Hulk actor who played the green rage monster and his alter ego Bruce Banner in live-action. In most instances, the Hulk’s origin story is that he is born after gamma radiation experiments conducted by brilliant scientist Bruce Banner end up unleashing his inner beast, leading to a transformation from human to rampaging monster. Thankfully, the Hulk’s fury is most often directed at villains, but any Marvel Comics and MCU veteran knows that the creature sometimes snaps and decimates anyone in its path too.

In the live-action adaptations of the Incredible Hulk character made so far, the uglier side of the Hulk is only rarely seen, and usually as a result of a villainous plot. That’s probably well and good, as it would be hard for audiences to root for an Avenger who had ripped another superhero in half in a prior film. The real letdown for Hulk fans is that due to a rights divide between Disney/Marvel Studios and Universal Pictures, it seems unlikely another Incredible Hulk solo movie will ever be released. In addition to this, many wondered after Norton’s movie: why did they replace the original Hulk?

In the meantime, at least the Hulk continues to make appearances in new MCU movies and TV shows despite Ed Norton’s Hulk being replaced, keeping the big green bruiser alive in the pop-culture consciousness. (The Hulk’s MCU story is even getting a new addition on Disney+ with She-Hulk starring Tatiana Maslany). Five actors have played either Bruce Banner or the Hulk in live-action to date, and here’s every Hulk actor who has taken on the part.

The first introduction that those who didn’t read Marvel Comics got to The Incredible Hulk was his self-titled TV series, which began in 1977, and also spawned several follow-up TV movies that incorporated other Marvel characters like Thor and Daredevil. Two different actors played Dr. Banner – named David Banner instead of Bruce in this version – and the Hulk, with Banner being portrayed by the late Bill Bixby.

Bixby had previously gained fame on shows like My Favorite Martian and The Courtship of Eddie’s Father, and turned out to be an excellent choice to lead The Incredible Hulk. Out of every Hulk actor who has played the mild-mannered scientist, Bixby imbued David Banner with both an affable likability and a solemn sadness, which helped convey his compassion for others and heroic qualities, while also getting across the unwilling nature of his powers. Sadly, Bixby’s Hulk suffered a tragic final fate in the appropriately titled Death of the Incredible Hulk.

In the Incredible Hulk TV series and its follow-up TV movies, Lou Ferrigno portrayed the Hulk, while Bixby played Banner. Switching actors was about the only way to accomplish the character realistically on a 1970s budget for the Hulk TV series (which will definitely be different for She-Hulk), as it lacked the advances in CGI effects that modern adaptations have had. Fortunately, Ferrigno is a muscle-bound mountain of a man, and out of every Hulk actor, he proved just as perfect a choice for Hulk as Bixby was for Banner, as he’d been a championship-winning professional bodybuilder prior to getting into acting.

Ferrigno certainly isn’t a Daniel Day-Lewis type, but he brings a brutal physicality to his performance that helps sell the Hulk as an imposing figure that no one should ever want to mess with. When Banner transforms into the Hulk, his foes are usually left both confused and terrified, and that reaction is justified by how ready to rip someone apart Ferrigno’s Hulk looks, even if the lack of CGI doesn’t allow the character to be as towering and enormous as he’s usually depicted. Ferrigno later voiced the character in Eric Bana’s movie and Ed Norton’s Hulk movie.

Directed by Ang Lee, 2003’s Hulk starred Australian actor Eric Bana as Bruce Banner, with the Hulk being a fully CGI character for the first time, at least visually. Hulk is a complex film, and has its strong points, but has quickly been overshadowed in the years since by Hulk’s appearances within the MCU. Critics gave it decent enough reviews at the time, but box office totals weren’t very impressive when accounting for the film’s hefty budget.

As for Bana’s performance, it’s actually pretty good and makes Bruce’s plight easy to sympathize with. If anything, the issues many have with Hulk 2003 are more on the script than the actors, as a common complaint is that Hulk is too much of a talky, introspective drama and doesn’t feature nearly enough smashing things. Still, Bana does well, and the film is definitely worth checking out for oneself.

When Marvel Studios decided to make The Incredible Hulk early in phase 1 of the MCU, they cast Edward Norton as Bruce Banner. That was a sensible move from an acting standpoint, as Norton’s work has been widely acclaimed. Norton played the Hulk with a raging fire compared to his later Hulk replacement Mark Ruffalo, who took on a slow-burn approach. Many have come to the conclusion that out of every Hulk actor, Norton did it best. Unfortunately, he also has a reputation in Hollywood for being a bit of a control freak, whether deserved or not. Norton was reported to have engaged in multiple disputes with Kevin Feige and other Marvel producers over the final cut, although he’s disputed the validity of those claims.

Mark Ruffalo replaced Edward Norton’s Hulk beginning in 2012’s The Avengers and has gone on to appear in sequels Avengers: Age of Ultron, Avengers: Infinity War, and Avengers: Endgame. He also played a vital role in Thor: Ragnarok, leading to the closest thing to another Hulk-focused movie that fans have gotten since 2008. Ruffalo’s Bruce Banner also made post-credits cameos in Iron Man 3, Captain Marvel, and Shang-Chi and the Legend of the Ten Rings. It’s doubtful that Ruffalo will star in his own Incredible Hulk movie, as for whatever reason the character hasn’t had the most successful run when featured without the other Avengers. However, one should always take a “never say never” attitude when it comes to the Marvel franchise. After Ed Norton’s stunning performance in the role, many wondered why Marvel replaced the original MCU Hulk with Mark Ruffalo.

Norton’s performance is his usual quality work, and it certainly would’ve been interesting to see him perform alongside Robert Downey Jr., Chris Evans, and the rest of the gang in The Avengers. Alas, that wasn’t to be, as Ed Norton’s Hulk was replaced and the actor wasn’t brought back for any further MCU films, reportedly due to claims that he was hard to work with. Given the star vehicle that The Avengers franchise is, there are enough well-known actors that Norton’s on-set behavior wouldn’t be tolerated well. Resultingly, Ed Norton’s Hulk was replaced with Mark Ruffalo’s version.

Ruffalo has come to be seen as the definitive screen Hulk and Banner, which makes sense, as he’s a part of one of the biggest movie franchises ever made. Ruffalo definitely changes Hulk/Banner, making the character less intense and more socially awkward. Still, he also gets across Banner’s brilliance, even if said brilliance doesn’t extend to operating the Hulkbuster armor. Ruffalo’s performance also extended to playing Hulk himself in Avengers: Endgame, with the birth of Smart Hulk.

In addition to every Hulk actor who’s taken on the role of Bruce Banner, the Disney+ series She-Hulk from Marvel Studios will introduce a new character, played by Tatiana Maslany. Jennifer Walters (a.k.a. She-Hulk) is Bruce’s cousin who winds up possessing similar Hulk powers, but with more flexibility and control. Jennifer can transform between her regular self and her giant green self at will and retains all her intelligence when Hulked out. This is a good thing, as she’s also a talented lawyer, and regularly practices law while in Hulk form.

Maslany is a great casting choice for the She-Hulk TV show and should make the role positively memorable as long as subpar CGI doesn’t stand in her way. The Canadian actress is best known for starring in the sci-fi drama Orphan Black, in which she played 14 different clones during the course of the show’s five seasons. Clearly, she has all the range necessary to capture Jennifer’s normal and Hulk personalities. Only time will tell if She-Hulk itself is any good, but Maslany is a solid addition to the ranks of every Hulk actor who has brought The Incredible Hulk characters to life onscreen.

Next: The MCU Has Only Used Marvel’s Real Hulk Once