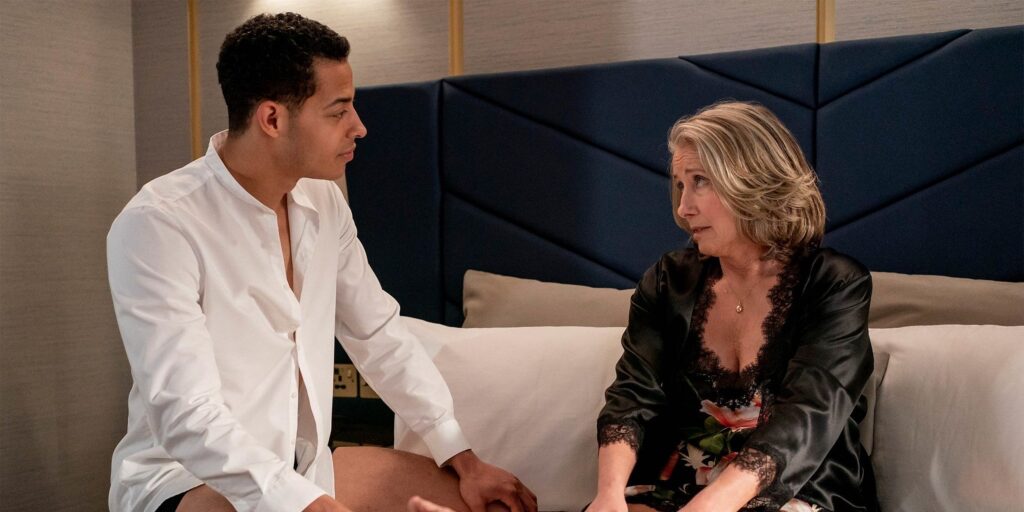 Good Luck to You, Leo Grande, currently out on Hulu, is a charming film that nevertheless takes its message on sexuality and sex work seriously. Directed by Sophie Hyde and written by Katy Brand, the movie stars screen legend Emma Thompson as Nancy Stokes, a woman who realizes she’s unsatisfied with the sex she’s had in her life thus far.

In order to correct that, Nancy brings in Leo (Daryl McCormack, Peaky Blinders). The two them embark on a journey of sexual fulfillment and self-discovery that isn’t quite what either initially expected.

Screen Rant spoke to Thompson and McCormack about the space they were given to explore the intimacy between their characters, the lessons they learned about sex work, and the experience of being at peace with one’s body.

Screen Rant: What a wonderful, wonderful movie. I loved every second of it, and how most of the movie is you two just having conversations together. What can you say about your partnership in this movie and working together?

Emma Thompson: It was a great privilege, really. We were helped by a lot of external things, as well. I sometimes think if we’d made this… If we’d have more time, if there hadn’t been COVID, if we hadn’t been in lockdown, if there had been more money and we were shooting it in a grander way somehow – everything about it, as it were, conspired to make it more intense. The intimacy that we were able to and needed to find.

If we’d been out with the crew and getting to know everyone else, I don’t think we could have reached the sorts of spaces that we needed to reach. There was a kind of silence around us, because the city was closed and sort of closing in. It was Winter, and we sort of held on to each other because we were the only ones.

And we were so lucky because Sophie Hyde, our director, created a safe space in which we could really be and explore. But it felt so intense and intimate, didn’t it? And I’m sure that was part of it, don’t you think?

Daryl McCormack: Yeah, it felt very much set up for us to really exist and coexist with each other in that space. And we had a small intimate crew that all felt like they were leaning and supporting into us exploring these characters.

And one of the main things, I think, was the chronological order that we shot in. We were able to gradually become more and more comfortable as actors alongside the characters who were growing more and more close to each other.

One thing I’m loving about this press tour is it’s a continuation of the sex positivity that’s in the movie, because we are having these discussions. Daryl, I’ve heard that you had some conversations with sex workers going into this movie. What did you learn, and what do you hope that people take away from watching this movie?

Daryl McCormack: I felt, and what I hope people learn as well, that there is a generic image of sex workers as people who are diminished and who are victims. And in our research, we didn’t find that.

One thing I’m super proud of is that this film is really shining a spotlight on that experience, and also just the capacity that sex work has to spiritually heal and to physically liberate. That was what I was hoping to just carry into the character of Leo. To not really feel like I was here to represent sex work as an entirety, but just to really embody that essence that I was privileged to receive from the people that I spoke to.

Lastly, Emma, I just want to hear from you what you learned about yourself making this movie. Is there something that you would look back and wish you could just tell the younger version of you, who may not feel confident? Watching this, I was like, “God, I just want to get naked in front of a mirror and be like, ‘I’m hot.'”

Emma Thompson: I think one of the phrases that’s come through on this tour is really interesting. It’s the neutral gaze that Nancy is able to look at herself. Neutral sounds like such a neutral, bland word – but it’s actually without judgment, one way or the other. Not, “Ooh, I’m so hot,” or “Ooh, I’m so horrid.”

Neither of those things is really what happens at the end. She’s unlocked herself. Something’s happened in her body, yes – but also in her soul; in her spirit. She’s not looking at her body in the way that she looked at it before, or in the way that we tend to look at our bodies from the outside in. She’s just internalizing a sense of ownership that she hasn’t had heretofore.

It’s a strangely innocent, paradisal moment; almost prelapsarian, sort of like Eve in the Garden of Eden. Just for a moment, suddenly, there’s no shame. There’s no self-consciousness. She’s just on her own, naked with her pleasure, and with her body that is hers and precious to her.

Retired widow Nancy Stokes hires a good-looking young sex worker called Leo Grande, in the hope of enjoying a night of pleasure and self-discovery after an unfulfilling married life.

Good Luck To You, Leo Grande is now available to stream on Hulu.