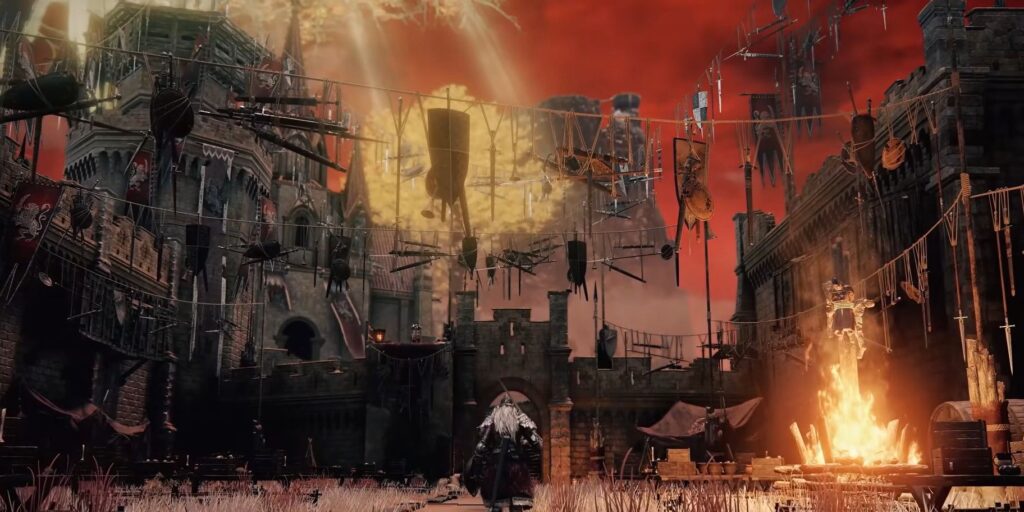 Traversing the scarlet wasteland of Caelid has been made a little easier thanks to an Elden Ring player who found a way to reach a secret platform that many players have struggled to get to. Since its release in February, the title has offered a world of exploration and discovery for fans of the Soulsborne series of games, with new updates and potential Elden Ring DLC still on the way.

The Lands Between of FromSoftware’s open world dark fantasy RPG holds many secrets and hidden treasures that players are still discovering. One of those hidden treasures is Rain of Arrows, an Ash of War upgrade that works particularly well with builds that utilize Greatbows, sending a shower of magic arrows down on an enemy for a short period of time. It’s a great item, but it’s notoriously difficult to obtain. Not only is the Ash of War located in Greyoll’s Dragonbarrow, a region of Caelid that is a notoriously difficult area for lower-level Elden Ring players to travel through, but it’s located on a platform at the bottom of a long cliff decorated with roots from the nearby Minor Erdtree.

Related: Which Elden Ring Demigod Would Win In A Fight

While this poses a perfect opportunity to show Elden Ring‘s platforming mechanics, Game Rant shared a video of a user who found a clever way to reach the upgrade. The video was posted to r/EldenRing by Reddit user MeticulousMitch and shows them riding Torrent into a spiritspring, those funnels of air that allow Torrent to jump at great heights. Since using a spiritspring negates any fall damage when used, Torrent is able to sail over the cliff’s edge and all the way down to the hidden platform without needing to use any of the Erdtree roots to navigate. Players will still need to take care of the golem that waits at the bottom, but the trick eliminates all the hassle and frustration of awkwardly platforming all the way down.

These sorts of platforming tricks make traveling through the hostile regions of the Lands Between way easier, and often involve the player’s loyal spirit steed in unexpected ways, sometimes even using glitches to make navigation easier. One player once discovered a glitch that allowed Elden Ring‘s Torrent to fly. This glitch was picked up by speedrunners after its discovery, though it has since fallen out of favor. What makes MeticulousMitch’s platforming trick interesting is that it doesn’t take advantage of any glitches or exploits, using only what’s possible in the game with some clever angling of Torrent’s momentum.

Elden Ring continues to open itself up to players in different and surprising ways, from entire levels made up of false doorways and secret tunnels to the realization that the graces dotted all around the Lands Between kind of look like Dark Souls humanity sprites. Whatever the future holds for Elden Ring, discoveries like this show why so many players keep returning to this tough yet expansive game.