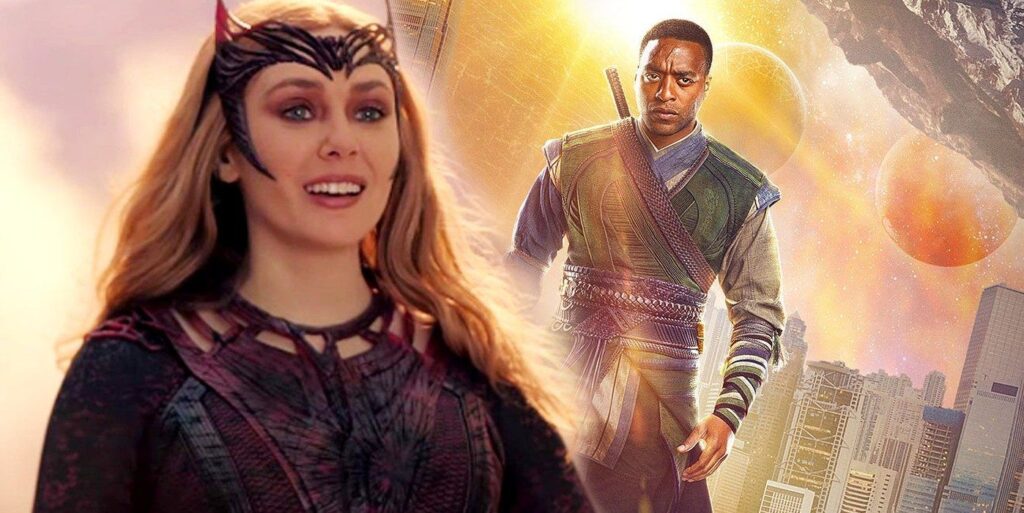 Doctor Strange in the Multiverse of Madness nearly saw the Scarlet Witch decapitate the MCU’s Earth-616 version of Chiwetel Ejiofor’s Baron Mordo. The first Doctor Strange film introduces Mordo as an ally and advocate of Stephen Strange. After finding out that the Ancient One drew power from the Dark Dimension and witnessing Strange use the Eye of Agamotto to broker a deal with Dormammu, he leaves the Masters of the Mystic Arts. That film’s post-credits scene sees Mordo stealing Jonathan Pangborn’s magic before claiming there are too many sorcerers in the world, suggesting he could be the sequel’s villain.

While Elizabeth Olsen’s Wanda Maximoff/Scarlet Witch serves as the villain of Sam Raimi’s Multiverse of Madness, audiences also see Ejiofor’s character return, albeit a different version of him. Partway through the film, Benedict Cumberbatch’s Doctor Strange and Xochitl Gomez’s America Chavez escape the Scarlet Witch by traveling through the MCU’s multiverse to Earth-838. There, they meet Master Mordo and the utopian society’s star-studded Illuminati. However, most of the Illuminati are swiftly slaughtered by Scarlet Witch when she dream walks into that reality’s Wanda. That said, Multiverse of Madness almost featured both versions of Mordo, with the original being murdered early on in the film.

Related: What If Makes Mordo’s Doctor Strange Plan Even Sillier

After releasing in theaters in May, Multiverse of Madness became available to stream on Disney+ and purchase on digital on June 22. In the audio commentary from the digital release (via The Direct), Raimi and writer Michael Waldron discuss an opening scene between Wanda and Mordo that was scrapped from the final cut. The scene would’ve shown the Scarlet Witch decapitating the sorcerer, setting her up as the film’s villain:

Raimi: “Michael had written an early scene with [Mordo] where we saw him in our universe, 616, where he was the Mordo that we knew from Doctor Strange 1, only he had been through many battles since that. He had a limp. And he was coming after the Scarlet Witch to take her power because he knew she was dark and terribly corrupted by the Darkhold and she killed him and cut off his head and presented it to Strange in a later scene. It was really great writing, but it slowed the beginning down too much, so we had to lose it.”

Waldron: “Yeah, that was a fun scene that just didn’t have a place in the movie. But it was cool that she cut his head off right halfway through his ears, [as he’s] about to say, ’The bill comes due.’”

While this additional Scarlet Witch villain scene would have made sense in picking up right where the first Doctor Strange left off and been an effective way to set up Wanda’s powers and state of mind, it also would have killed off Earth-616 Mordo. In addition to slowing down Multiverse of Madness‘ opening as Raimi says, Mordo’s death also would have prevented him from becoming a crucial antagonist in future Doctor Strange films, which he still appears poised to do. As the director explains, ultimately, Raimi and Waldron’s decision to instead open the film with Defender Strange and America Chavez being chased by a demon better set audiences up for Multiverse of Madness’ ultra-quick pacing.

Multiverse of Madness’ post-credits scene sets its titular sorcerer up for more multiversal adventures with Charlize Theron’s Clea now in the picture. Given this, it’s entirely possible that both Earth-616 and 838 Mordo will cause Stephen problems in the future. Ejiofor is a strong and beloved talent, and to not use him in Doctor Strange 3 or the MCU at large would seem to be a missed opportunity. Thankfully, Raimi and Waldron’s decision to keep 616 Mordo alive in Doctor Strange in the Multiverse of Madness leaves the door open for his return.

More: Was Tom Cruise’s Iron Man Ever Going To Be In Doctor Strange 2?

Doctor Strange in the Multiverse of Madness is streaming on Disney+ and will arrive on 4K Ultra HD, DVD, Blu-ray, and 4K Ultra HD on July 18th.