DCEU: 8 Memes That Perfectly Sum Up Aquaman As A Character 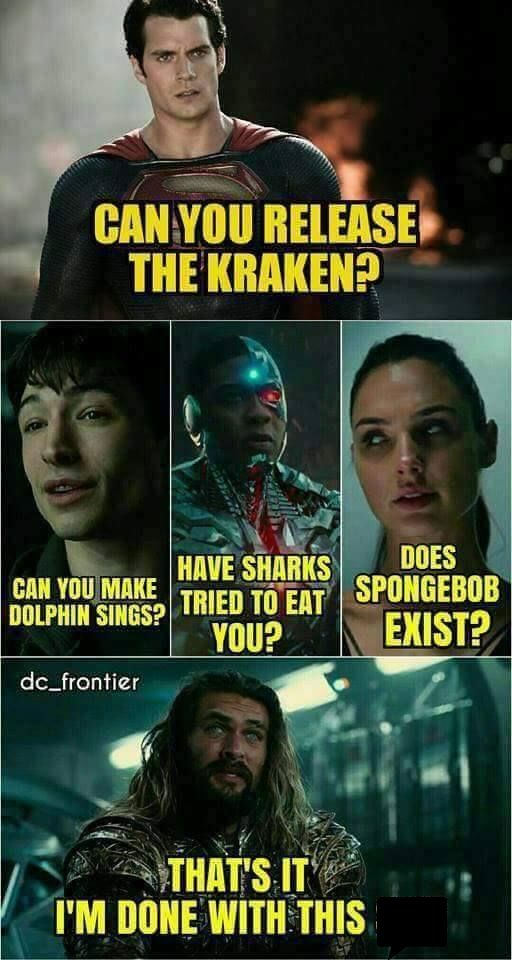 While DCEU team-up films may be on hold for now, the upcoming release of many solo DCEU films, such as Aquaman: The Lost Kingdom, has many fans excited as Jason Momoa is set to return to his iconic role as the titular hero.

While Jason Momoa has become recognized and praised by many movie fans for his cool and loveable himbo version of Aquaman, the internet has a plethora of memes that provide laugh-inducing critiques and relatable experiences that perfectly encapsulate the portrayal of Aquaman in the DCEU.

As if the Mermaid Man references weren’t already prevalent enough in the meme world of the internet, replacing Aquaman with his SpongeBob satirical knock-off as he shouts his catchphrase is just pure comedic genius.

Related: 10 Crossover Fights Between The MCU And DCEU That Fans Want To See

Since the character of Mermaid Man is heavily inspired by all of the jokes and exaggerated goofiness of Aquaman, this meme hilariously provides a fun twist to a traditional superhero movie poster while also acknowledging the quips and powers of Aquaman.

While also proving an Aquaman twist to one of the most popular memes of all time, this meme perfectly portrays the generational gap between the fans who grew up looking at Aquaman as more of a joke and the newer fans who see Jason Momoa as the definitive version of the character.

Most fans love the DCEU version of the character as he is both lovable and physically imposing, but that will never rid the characters of the goofy nature of his powers, even though it is fully embraced throughout the film.

As Jason Momoa continues to change and shape how DCEU fans and newcomers view Aquaman, many agree that he is perfect for the role and his loveable himbo nature makes him a character fans respect instead of making fun of.

As the meme shows how today’s live-action version of Aquaman would view the previous versions of himself, the meme encapsulates everything Jason Momoa’s brutal version of the character stands for.

Jason Momoa’s charismatic and tough version of the character has provided a breath of fresh air for many fans of the character who are used to him being the butt end of fish jokes, but even this hasn’t saved Aquaman from this tropes as one of Batman’s first lines to the character is “I hear you talk to fish.”

Related: 9 Best Aquaman Comics Characters Not Yet In The DCEU

Aquaman can become as cool and beloved of a superhero as Superman or Batman, but it seems even that won’t save the DCEU character from falling prey to this never-ending joke.

Making light of Aquaman’s mantle, this Twitter user believes that Aquaman’s younger years should be titled Waterboy, given that both characters are tough, funny, and brave. However, as many fans will be able to attest this is where most of the parallels stop since the hearts of their stories go in two different directions.

Aside from Jason Momoa’s stellar performance as the character, this movie also won fans over thanks to relatable storylines and impressive special effects.

Since Aquaman is a character that has been around since almost the very beginning of superhero comics, he has definitely had somewhat of an identity crisis over the years as writers of the character can’t seem to figure out a consistent tone for the character.

In using reverse humor by praising the older and more silly versions of the character, this meme allows fans to see just how far Aquaman has come from being “the guy that talks to fish” to one of the foundational members of the Justice League in the DCEU.

While this meme can seem pretty degrading to the character at first, it is also super accurate as the climax of Aquaman saw the character along with a legion of sea creatures turn the tide in the battle against King Orm.

Related: 10 Similarities Between DC’s Aquaman And Marvel’s Namor The Submariner

Seeing the popular Pixar characters from Finding Nemo definitely adds a lot of laughs to this meme (as is common when talking about Aquaman’s communication with fish) but it also perfectly shows that when it comes to the sea, there is nothing that the King of Atlantis doesn’t have dominion over.

One of the memorable comedy moments from the first Aquaman film came when Arthur made a joke about him currently peeing on the water-powered machine instead of Vera having to use her powers to do so.

As the DCEU version of the character thrives on being an effective hero while also not taking himself too seriously, this meme provides audiences with a hilarious reminder of the Aquaman’s quippy nature that he has in today’s films.

Next: Stranger Things & Who Each Main Cast Member Could Play In The DCEU