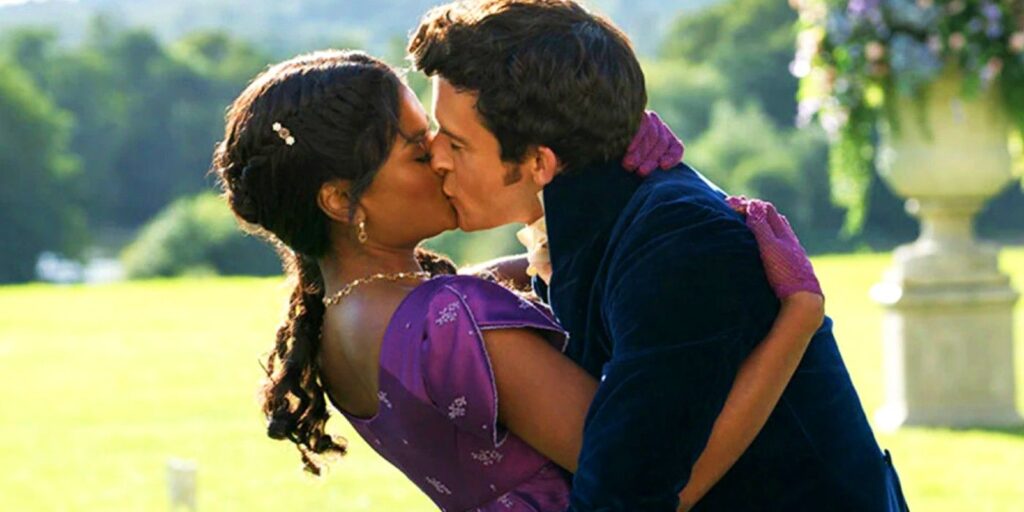 Simone Ashley, who plays the headstrong Kate Sharma on Bridgerton, found a weird source of inspiration to pull from for the show’s sex scenes: studying snails. The hot and heavy Netflix show, based on the Regency-era novels by Julia Quinn, slowed into more of a simmer for season 2’s central romance. It focused on the eldest Bridgerton sibling, Anthony, played by Jonathan Bailey, and his courtship of Edwina Sharma. However, he’s constantly fighting his much stronger attraction to her older sister, Kate. Fans of Bridgerton instantly glommed onto Kate, who proved to be a great heroine due to her strong independent streak, her wit, her stubbornness, and her willingness to admit when she’s wrong.

While there was noticeably less sex in season 2, the slow burn to Kate and Anthony winding up with one another, all the while verbally sparring with charged banter, led to more gratifying television due to the build-up. The show has been praised for its focus on female pleasure, as well as its implementation of the “female gaze.” The series serves as a rebuke to how sex is oft-portrayed in film and television, which is with a focus on objectifying the female body and focusing more on the pleasure of male characters. Still, even when there is a sex scene in Bridgerton with a focus on female pleasure, it can be difficult to pull off thanks to the show’s use of period-accurate furniture, as in the scene where Kate and Anthony consummate their feelings for one another.

In order to prepare for these scenes, Ashley, who co-stars in another sexually-charged Netflix show, Sex Education, revealed some of her unconventional study materials to the Los Angeles Times podcast The Envelope (via EW). In the interview, Ashley talks about how she observed the mating habits of snails to better understand the mechanisms of sex scenes. She also talks about how she participated in sexual intimacy workshops in order to break the ice on set and become comfortable shooting such scenes. Her full quote can be seen below:

“In Sex Education, we had like a sex intimacy workshop where we completely broke the ice, and you know, anything that was said, it was the most embarrassing or the most vulnerable, but it was a safe, intimate space. And we explored the movement of different animals to kind of portray different paces or different sexualities or how sensual something could be. For example, we look to how snails mate, and when snails mate, they actually produce a plasma that intertwines. So if it was a really sensual, slow kind of scene, we’d be like, ‘Oh, it’s like the snail.’ And it’s super like the plasma, like falling like honey. So we would make it about that or how dogs mate or chimpanzees mate. It’s very fast-paced and a different kind of style. So this kind of scene, we’re going to make it very funny and quirky and just silly, and let’s think of like, this animal.”

While not anyone’s immediate idea of sexy, the shelled creatures are appearing more frequently in oddly titillating contexts. Ben Affleck’s character in the erotic-thriller Deep Water keeps a shed full of them, and at one point two mating snails ‘intertwine plasma’ on his hand as he watches. While Simone Ashley studying snails in this context might initially seem odd, the use of animal work as inspiration for actors in the physicality and vocalization in their roles has a long history on stage and in Hollywood. Anthony Hopkins channeled a crocodile and a tarantula for his role as Hannibal Lecter, and Jim Carrey a cockatoo for Ace Ventura.

Shows like Bridgerton now use an intimacy coordinator whose job is to ensure cast and crew alike feel comfortable and safe while performing sex scenes. They help the director tell the story of the scene and sell its emotion while making sure no boundaries are being crossed, and everyone is being respected. So using animals as a shorthand to set the pace or energy for how a sex scene plays out makes a certain amount of sense as long as everyone’s supposed to be on the same page. As season 3 moves on to Penelope and Colin Bridgerton’s story, Anthony and Kate will still be around the Ton. But now Bridgerton viewers can be welcomed to a particularly slimy mental picture the next time the two lovers get down to business.

Next: Bridgerton Season 2 Missed A Simon Trick That Would’ve Made Kate Even Better