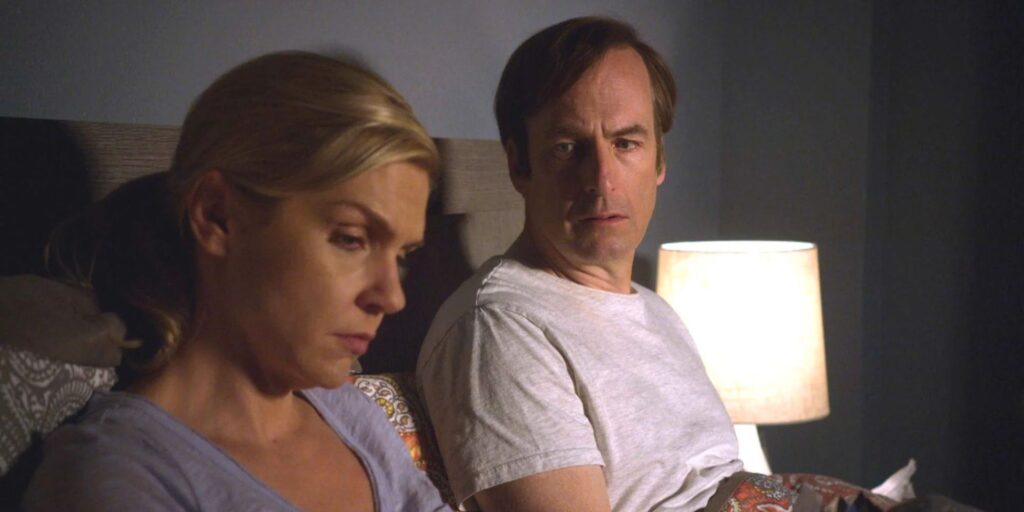 Now that fans of the show have settled into the near-unbearable wait until the final part of the final season begins, tension regarding the fate of Better Call Saul‘s most standout character, Kim Wexler, has never been higher. No matter how the deadly situation with Lalo is resolved, Kim is heading down a dark path, acting more and more like a villain.

This is especially bad news considering that Kim is the smarter one of the two in her devastatingly effective partnership with Jimmy McGill. Though Jimmy is the expert in conning people, a lot of Kim’s ideas and schemes are much better than his. It’s clear that without her, Saul Goodman wouldn’t exist.

When Jimmy makes his first big mistake in his combativeness with Chuck by doctoring some of Chuck’s work documents to cause an embarrassing scene, everyone knows that Jimmy has crossed a line. Kim sticks by Jimmy, knowing that even though he did a bad thing, Chuck’s treatment of Jimmy can still be identified as the root cause of it all.

Kim is nowhere near the moral freefall that she’s in during season 6 of Better Call Saul, but she strongly implies to Jimmy that he needs to make sure that he covered absolutely all of his tracks. This leads to Jimmy managing to bribe the copy shop assistant just in time to prevent Chuck from obtaining a confession. Perhaps if she hadn’t things would never have reached the dark conclusion that they did.

When Kevin Wachtell asks Kim for the impossible when he wants to suddenly change the plans for one of his new branches at the last minute, she enlists Jimmy for another of their con jobs. This time, they orchestrate a simple switch after she garners sympathy from a planning office employee by pretending to have a badly injured ankle and a new baby, with only her dimwitted brother, played by Jimmy, for help.

This is clearly one of Jimmy and Kim’s team efforts, and it’s never revealed exactly who comes up with which parts of this plan. However, the idea for it in the first place all comes from Kim, with her showing just great she can be at playing a role for the sake of a job and even noticeably outshining Jimmy as a manipulative liar for the first time in the show.

This is a great example of a quintessentially brilliant Kim Wexler scheme that inevitably backfires in the oddest of ways. Fearing that Rich Schweikart is on to her and perhaps having a pang of conscience, Kim tells Jimmy not to go through with this plan but he does anyway, successfully removing suspicion from Kim but betraying her trust.

Nevertheless, the idea is pure Kim. It’s not just beneficial for Jimmy and Kim, holding Kevin accountable for the unfair usage of a photographer’s work is actually the right thing to do. The threat of a copyright injunction not only bolsters Jimmy’s presentation of planned attacks against Mesa Verde, which strong-arm Kevin Wachtell into not tearing down Everett Acker’s house to build a new call center, but it also creates another deal to give fair recompense and credit to Olivia Bitsui, whose photograph was used to make Mesa Verde Bank and Trust’s logo.

During the height of the war between Jimmy and Chuck, Chuck presses charges against Jimmy for, in a fit of rage, breaking into his house and destroying a piece of evidence. Jimmy and Kim need to get their own evidence to counter Chuck’s narrative and there’s no better person to get something like that than Mike Ehrmantraut.

Mike obviously comes courtesy of Jimmy, as Kim hasn’t met him at this point, but it’s Kim who calls just about every repair shop in Albuquerque to find who Chuck has booked to fix the door that Jimmy kicked down. Once she has the right people, she cancels the job so that Mike can gain access to Chuck’s house under the guise of being the hired repairman. Inside, Mike easily gets all of the photographic evidence that Jimmy and Kim need.

Some of Kim’s best schemes in Better Call Saul are so brilliant when compared to Jimmy’s because, unlike Jimmy’s best schemes, they’re completely above board, find a fair solution for everybody, and leave nobody in the dark. Kim’s solution for oil company owner Billy Gatwood is one of the best examples of this approach.

Billy Gatwood faces a fast-approaching tax bill that will ruin him thanks to a collapsed wall in one of his oil deposits that has opened a new space expanding into another company’s claim across the state border. Kim proposes that rather than paying taxes in both states, Gatwood circumvent this by paying the other company damages for “diminishing their resource.” Gatwood points out that this is effectively a “payoff”, but it’s a legitimate one and a squeaky clean solution to a messy problem, something that Jimmy could never come up with.

Kim and Jimmy’s plan to damage Howard’s reputation steadily unfolded over the course of the first part of Better Call Saul‘s final season, involving many parts and building to a withheld endgame. One of the early stages of the plan required Cliff Main to be fed their manufactured rumor about Howard being addicted to cocaine and, to feed him this idea, they needed a client that Cliff couldn’t refuse a meeting with despite never actually wanting to take the case. Kim identifies the perfect candidates in season 1 characters Craig and Betsy Kettleman.

The Kettlemans certainly are an excellent choice. Despite her being one of the best villains in Better Call Saul, the ringleader, Betsy Kettleman, isn’t as smart as she likes to think that she is and Kim ensures their silence in a matter of minutes by threatening to prosecute them for their latest illegal activity. If Kim continues down this path, she’ll rival villainous masterminds like Gus Fring and Lalo Salamanca.

After defeating Chuck in court, Jimmy still has to convince the bar association to reinstate him as a lawyer and it proves more difficult than he first assumed. After being rejected once on the grounds that he appeared insincere before his review board, Kim realizes that it’s because Jimmy avoided talking about Chuck.

Kim’s help with getting Jimmy reinstated may realize Chuck’s worst nightmare, birthing Saul Goodman into the world of law, but she does it for good reasons. Her effective strategy puts Jimmy into multiple public situations where he expresses remorse over how his relationship with Chuck ended, but he ultimately appears to feel nothing. Though Jimmy’s display of deep-rooted remorselessness was a moment that even fans of Better Call Saul didn’t see coming, it was still a good plan.

After Kim goes to bat for Jimmy and helps him get his job at Davis and Main, which he then deliberately tanks, she’s in the doghouse with both Howard and Chuck at HHM thanks to her association with Jimmy. After Jimmy promises to fix what he’s done, Kim lays down the law and firmly tells Jimmy that she’s not there to be saved and that she’ll dig herself out in her own way.

This is when the audience really gets its first taste of just how tenacious Kim can be as she dedicates seemingly every spare moment that she has toward finding a high-profile client to bring to HHM. After securing Mesa Verde, Howard and Chuck are ecstatic over the prospective billings and Kim is soon out of her exile in doc review. What’s even better is that she takes Mesa Verde with her when she leaves HHM not that long after.

Huell gets into serious trouble when he hits a plainclothes cop thinking that they’re a member of the public harassing Jimmy. Jimmy is prepared to tear down the reputation of the cop in order to spare Huell from jail but Kim steps in with a much better plan.

RELATED: The Most Powerful Characters In Better Call Saul

Jimmy does a lot of the legwork on this one, orchestrating a series of fake letters and phone conversations to convince the District Attorney’s office that Huell is actually a local hero in his hometown of Coushatta, Louisiana and that the case therefore simply isn’t worth the headache of the public outcry. However, the initial idea and the part about the deluge of written letters are shown to be Kim’s ideas. It’s a much less aggressive approach than Jimmy’s plan and it does the job perfectly, even infuriating the judge overseeing the case.

The tables really turn for Jimmy when Lalo shows up at Kim’s apartment unannounced and with murder in his eyes. While Lalo is grilling him–Salamanca style–over his supposedly simple vehicular breakdown in the desert, which was really the result of an attempted robbery, Jimmy is clearly cracking.

Kim steps up and speaks aggressively to Lalo, spinning the logical narrative that the audience would expect Jimmy to use as an explanation. It’s during this scene that the audience gets its first piece of hard evidence to support something that had long been hinted at in the show, which is that Kim is a far more powerful deceiver than even Jimmy.

As Kim begins to show her darker side at the end of season 5, she steers Jimmy towards a conversation about finishing his plan to get the Sandpiper Crossing class-action lawsuit settled. Jimmy aborted his first attempt after seeing the collateral damage it caused to the poor, sweet, class representative, Irene Landry. Kim’s plan is, at that point, uncharacteristically aggressive.

In a reversal from the Coushatta situation, Kim proposes that she and Jimmy deliberately tarnish the image of Howard Hamlin, placing doubt over the case and encouraging everyone to settle immediately. The intricate plan results in a “D-Day” where Howard is dosed with a drug and tricked into falsely accusing a judge of taking a bribe. It’s one of the most perfect plans in either Better Call Saul or Breaking Bad not just because of its creativity and execution but also because it all blows up in a fittingly unexpected way.

Having now drawn a drunk and very out-of-place Howard to Kim’s apartment to confront them, Jimmy and Kim are left stunned in terror when Lalo shows up again, now with proof of a plot against his life. Jimmy’s underworld life has now, thanks to Kim, collided with the legitimate world of HHM and the results are predictably horrifying. Lalo murders Howard to emphasize his rage and the first part of the final season of Better Call Saul ends with Jimmy and Kim in their most perilous situation yet.

NEXT: The Best Character In Each Season Of Better Call Saul