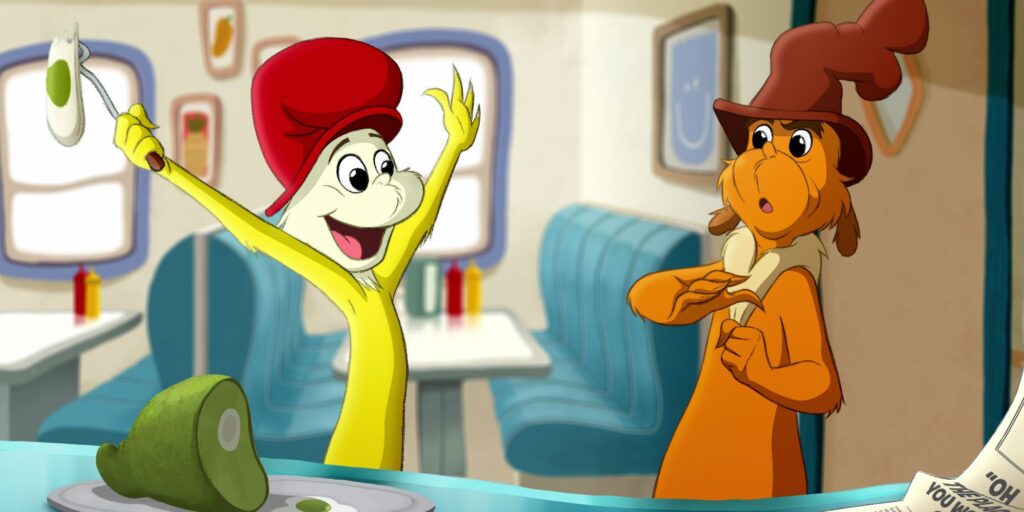 As one of the world’s top streaming platforms, Netflix is responsible for an avalanche of original content each year, producing numerous films and series for audiences to view from the comfort of their own homes.

Netflix certainly hasn’t excluded itself from the 2022 streaming wars, continuing to produce dozens of original series so far this calendar year. Though some of these shows have fallen by the wayside over the last six months, certain Netflix original series have managed to score highly with critics on the International Movie Database.

Green Eggs and Ham is an animated Netflix original based on the characters featured in Dr. Seuss’s children’s book of the same name. The series features a star-studded voice cast, including Adam DeVine as Sam, Michael Douglass as Guy-Am-I, and Keegan-Michael Key as the narrator. The series’ second season, consisting of ten episodes, premiered in April of this year.

Despite its fairly derivative premise as a children’s show, Green Eggs and Ham has proven to be remarkably well-written, funny, and educational all at the same time. It is the perfect series for families to watch together to learn, laugh, and enjoy some top-notch animation.

After an award-winning run, Grace and Frankie aired its seventh and final season in April of this year. The series followed Jane Fonda and Lily Tomlin in the titular roles, two rivals who become best friends and help each other rebuild their lives after their husbands fall in love with one another.

Grace and Frankie may have taken some time to find its stride, but its recent seasons have been hailed as must-see television, with several Emmys proving the series’ worth. With ninety-four episodes crescendoing into an emotional final season, Grace and Frankie is one of Netflix’s best recent comedies.

Netflix’s shows directed at children are often overlooked by general audiences, but the streamer’s latest endeavor into children’s shows, The Creature Cases, has proven to be a critical success with its first season, following the adventures of animal detectives in a fantastical world.

The series has achieved acclaim for its fun premise and engaging animation style, which has led to a positive response from children and parents alike. Kids’ series that appeal to a wider audience are a rare commodity in modern entertainment, but series like The Creature Cases fight to change this status quo.

The British crime drama Top Boy aired the second season of its revived Netflix run in March of 2022, continuing to tell its emotionally impactful story of drugs and gangs in London. The critically acclaimed drama works toward its big finish, setting up its third and final season, which is expected to premiere sometime in the next several years.

Top Boy may have flown under the radar for many audiences, but critics have paid attention to its well-crafted and all-too-real story revolving around substance abuse and gang violence in big cities like London. The series may prove depressing to many viewers, but nevertheless makes an important point about the state of the world and various social institutions.

From the mind of Ricky Gervais, creator of The Office and countless other beloved British series, After Life is one of the best dark comedies on Netflix. The show, which deals with the concepts of grief, mourning, and death, aired its third and final season in January of 2022 to resounding critical success.

After Life is the rare comedy that isn’t afraid to delve into deeper subjects that challenge viewers’ personal paradigms and question the very reason for life itself. Viewers shouldn’t fear such explorations, however, as the witticisms that they have come to expect from Gervais’s work are just as present as ever, making for a remarkably well-rounded series.

After a hailed run that spanned the course of seven years, The Last Kingdom aired its fifth and final season earlier this March. The final batch of episodes, which followed the final leg of Uhtred’s lifelong mission, cement the series as one of the best Viking shows available to stream now.

For fans of The Last Kingdom‘s previous seasons, the final ten episodes are a must-watch. For anyone unacquainted with the long-running series, the prior four seasons are all readily available for quick binging. This series capitalizes on its exciting premise to deliver one of the most intriguing historical dramas of the decade.

Ozark is one of many Netflix original series to take its bow during the first half of 2022. After several years of award-winning content, the Jason Bateman and Laura Linney-led series aired its fourth and final season in April of this year, bringing the saga of the Byrde family to an explosive end.

Following in the footsteps of series like Breaking Bad, Ozark features the downfall of upstanding citizens to career criminals in an emotionally resolute story with plenty of twists and turns to keep the audience intrigued. The series is one of Netflix’s greatest successes of the past decade and sets the standard for what a streaming drama can truly be.

After a lengthy wait, Stranger Things has finally premiered the entirety of its fourth season, reuniting the expansive cast for yet another journey through the mysterious goings-on of Hawkins, Indiana. The horror series enters the final stretch for its well-loved run, setting up its fifth and final season for a premiere sometime in the next few years.

Stranger Things 4 tells a larger story than any season before it, pushing its characters to new extremes over the course of its nine episodes, with some characters proving to be more valuable to the show’s plot than others. The latest batch of episodes continues to prove that Netflix still has the ability to produce fan-pleasing content to compete with other rising streaming platforms like HBO Max and Disney+.

Originally airing on the BBC, Peaky Blinders has found its new home on Netflix, with its sixth and final season airing this April. The series, which takes place in early 20th century England, follows the titular British gang in its assertion of dominance on the streets of an economically collapsed nation.

Peaky Blinders is a star-studded series well worth a viewing for any fan of series dealing with organized crime. Over the course of its six seasons, the series takes viewers on an exciting ride through a unique era in world history, with plenty of twists and surprises in its final season to keep fans on their toes until the very end.

Heartstopper is one of Netflix’s newest teen dramas, which premiered its very first season, consisting of eight episodes, in April of 2022. The series follows a group of high schoolers as they make discoveries about themselves and each other, as friendships flourish into romances.

Heartstopper proved to be a hit for Netflix, leading the streamer to renew the British coming-of-age series for two additional seasons, set to begin production in the near future. With critical and audience acclaim at its heels, the series may prove to be one of Netflix’s next big franchises for 2023 and beyond.

NEXT: The 10 Best Netflix Shows With Female Protagonists