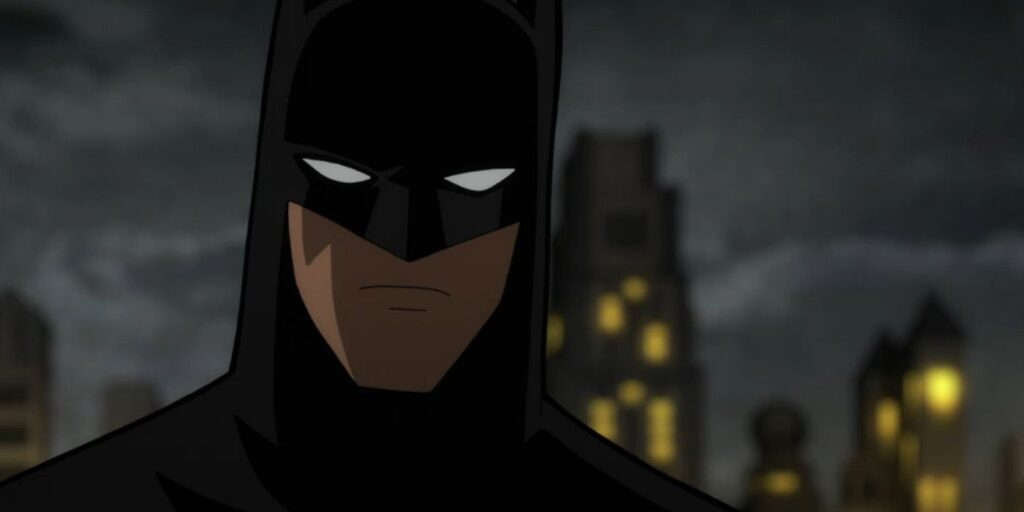 Hot off the heels of The Boys‘ third season, Jensen Ackles appears to be at a high point in his career. Though it is unclear if he’ll return in season 4, he is currently set to star as a main character on Big Sky and will narrate the Supernatural spin-off series The Winchesters.

The year 2022 is looking to be great for the actor, which is saying a lot considering the wealth of parts he has played over the past 25 years. Though most fans will remember Ackles for his 15 years as Dean Winchester, he also had a chance to play a clone and voice Batman.

Based on the comic by Jeph Loeb and Tim Sale, Batman: The Long Halloween Part 1 has Jensen Ackles’ Batman go up against Holiday, a serial killer who has begun murdering members of the Falcone crime family. With barely any clues to work off of, Batman must use his wits to uncover Holiday’s identity and stop the killer before a crime war breaks out.

As the titular caped crusader, Ackles gives Batman a sense of uncertainty and befuddlement as he is relatively fresh at crime fighting. He’s still a competent fighter and thinker but not yet the world’s greatest detective, and Ackles sells the inexperience tastefully while still committing to the character’s gruff attitude.

Released during Supernatural’s peak in creativity, Ten Inch Hero sees Jensen Ackles play a different type of character as a socially awkward sandwich shop employee named Priestly. His world is turned upside down when a new girl begins working at the sandwich shop in search of her long-lost daughter and threatens the stability of his career.

Though Ackles is relegated to a supporting role in the film, he makes the most out of it and milks the part for all its comedic worth. This is most evident in his exchanges with Tish (Danneel Harris) who always seems to have him tripping over his tongue. They’re an unlikely match, yet the chemistry between the two stars (who would later marry each other in real-life) absolutely sells this subplot.

Dark Angel is often forgotten in comparison to James Cameron’s highly successful film projects, but at the time of its release, the show was a big deal. The series starred a then up-and-coming Jessica Alba as a genetically enhanced super-soldier who goes on the run in an effort to lead a normal life.

Besides making Jessica Alba a household name and launching her acting career, Dark Angel also proved important for Jensen Ackles. Starting out as a guest character, Ackles was quickly made a main character during the show’s second season as the obnoxious know-it-all Alec McDowell, a role which solidified him as a legitimate actor rather than a soap star. The writing might have been on the wall for Dark Angel by the time he was made a main character, but this star was on the rise.

Before Jensen Ackles took on the role of superheroes like Batman and Soldier Boy, his first foray into the genre was as Jason Teague during Smallville‘s fourth season. During his time on the show, he became a foil for Clark due to his romantic relationship with Lana.

RELATED: Every Season of Smallville Ranked by Ratings

While largely leaning on the laid-back charm that Ackles had developed in his earlier roles, the role of Jason Teague also gave Ackles some meaty material that allowed the actor to lean into his dramatic chops. This dichotomy between the nice boy next door and violent killer would end up opening doors for Ackles to take on bigger roles.

One of Jensen Ackles first forays into voice-acting, Batman: Under The Red Hood sees him play the pivotal role of Jason Todd, Batman’s former sidekick who was brutally beaten and murdered by the Joker. After having been brought back to life, he takes on the alias of The Red Hood to purge Gotham of all crime.

Despite being Ackles’ earliest voice-acting roles, he nails the part of a crazed and tortured vigilante who wants to exact revenge on the person who hurt him. For much of the film, he gives the Red Hood a cold yet angry demeanor, but when the hood comes off, the character is allowed to well up in one of the most painful Batman scenes put to animation.

An ill-fated TV drama that was canceled before it even aired, Still Life would have focused on the life of the Morgan family as they cope with the loss of oldest son Jake. Jensen Ackles would have played the role of Jake’s brother Max, a man in search of his identity following Jack’s death.

Though only one episode of Still Life was ever produced, it’s evident that Max Morgan would have been a breakout role for Jensen Ackles, given the character’s contemplative nature. It would have allowed the actor to take on more “respectable” and dramatic roles instead of the soap operas and genre fare that had previously dominated his filmography.

One of the defining children’s programs of the 1990s, Wishbone focused on the fantasies of titular dog as he inserts himself into the works of classic literature. It was also the first time Jensen Ackles ever made an appearance on television, having featured in the season 1 episode, “Viva Wishbone.”

Though Jensen Ackles only plays a small part in “Viva Wishbone,” the way his character is talked about drives the series’ main human character, Joe, to jealousy. Of course, when Jensen Ackles finally shows up at the end of the episode, his charm is able to smooth any tension there is and resolve the central conflict.

Not to be confused with the similarly titled Con Man from actor Alan Tudyk, Kings of Con was a short lived show that centered around the fictional actors Rob Bennet and Richard Slate as they went about the convention circuit. Jensen Ackles starred in the show’s final episode as a parody of himself named Justin Angles.

Though he only features in a single episode, Ackles makes the most of his screen time by hamming up his personality and bouncing off of his Supernatural costar Jared Padellecki. It might not be the most flattering role for the actor given how close it is to his real life, but Ackles seems to revel in the opportunity to poke fun at himself and play a disgruntled celebrity.

The project that will forever be attached to Jensen Ackles’ name, Supernatural saw him play Dean Winchester, the older brother of Sam Winchester and a demon hunter. Though the show was originally supposed to end after five seasons, the network kept Supernatural going for another decade due to its consistent ratings and strong cult following.

Because of Supernatural’s longevity, Jensen Ackles was able to show his range as Dean Winchester. He got to play the brooding loner, goofy sibling, uncontrollable hothead and everything in between. Together with Supernatural co-star Jared Padalecki, he helped craft one of the most iconic duos in all of television history, and its a testament to his skills as an actor that the role of Dean never petered off into parody.

One of Jensen Ackles’ most recent performances, his time as Soldier Boy on The Boys proved crucial to season 3’s success. Unlike some of his more famous roles, he plays an out-in-out scumbag who gives Homelander a run for his money and struggles with trauma from his captivity under the Russians.

Despite Soldier Boy’s obvious moral depravity, Jensen imbues the role with his usual charm and devil-may-care attitude. It’s a choice that makes Soldier Boy a difficult character to hate and helps explain why he and the other heroes in The Boys are beloved by the public.

NEXT: 10 Best Performances In The Boys