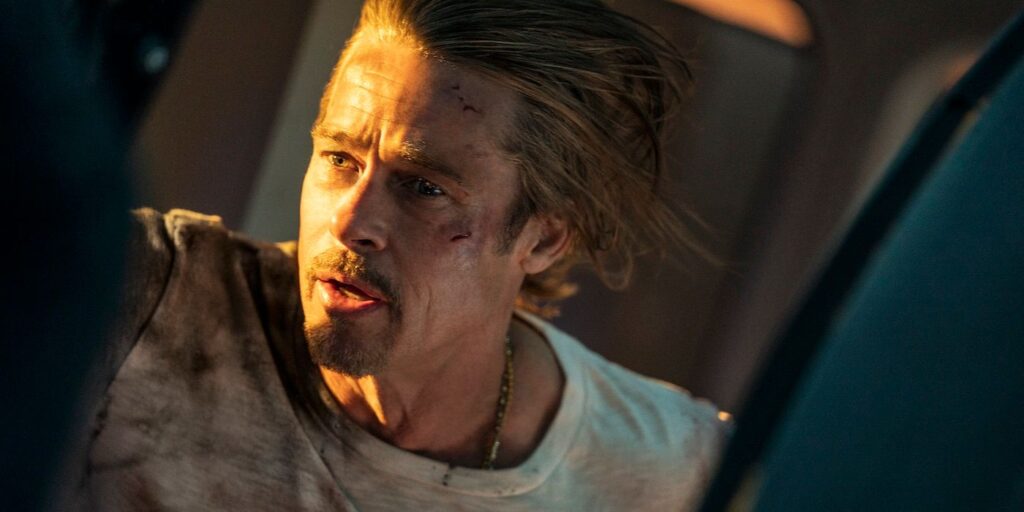 Bullet Train is the new Brad Pitt-starring action movie set on a train, but despite its interesting premise, the film isn’t getting the best reviews. However, it is an enjoyable popcorn flick full of impressive action scenes, and it’s good enough to pass the time for anyone waiting for John Wick 4.

The David Leitch-directed movie had an interesting production that was full of casting failures and non-cameos, along with an original draft that was much different. Bullet Train evolved drastically over the course of its production, and the behind-the-scenes story of the film might actually be more interesting than the movie itself.

David Leitch has become a great director in his own right. The filmmaker has directed some of the 2010s’ most stylish action movies including Atomic Blonde and Deadpool 2, and he co-directed one of the most influential action movies of the 21st century, John Wick. However, he wasn’t always a director, and before he was even a stunt coordinator in Hollywood, he was a stunt double.

Leitch was Pitt’s stunt double for Fight Club, Troy, Ocean’s Eleven, and several others, and Pitt has spoken about what it’s like being directed by his former stunt double. The actor explained what their working relationship was like then and what it’s like now, noting, “He trained me for those fights, and in a way, he was helping me develop the character; now he’s a director with his own voice and own vernacular and I’m serving him, he’s the boss.”

Lady Gaga is now as much of an established actor as she is a musician. After two massively acclaimed roles in A Star Is Born and House of Gucci, it looks like she’ll play Harley Quinn in Joker 2 too.

Gaga was almost cast in Bullet Train, which would have harkened back to her earlier kitschy roles in films like Machete Kills. Though he won’t reveal which character it was for, Leitch revealed that the pop star was in early talks to star in the film, but it didn’t work out because the shooting schedule overlapped too much with House of Gucci.

Leitch popularized gun-fu in Hollywood with John Wick. Ever since the 2014 film, every action movie has tried to mimic its fighting style, even Leitch’s own movies like Atomic Blonde. However, the filmmaker took a different approach to hand-to-hand combat this time around. The filmmaker explained that he was influenced by Jackie Chan in the way that the fight sequences blent combat and comedy.

Leitch explained, “There’s a little bit of physical comedy. The fights are designed to enhance the characters. We’re here to have fun in this super-contained space.”

Joey king might have had minor roles in huge movies like The Dark Knight Rises, Oz the Great and Powerful, and The Conjuring, but she isn’t exactly the A-list movie star that Brad Pitt and Sandra Bullock are. Nevertheless, she has one of the biggest roles in the movie, as she plays the villain trying to retrieve the suitcase from Pitt’s character.

However, according to The Independent, she didn’t actually think she’d get the part when she was auditioning. King commented, “I remember auditioning, and I thought to myself: ‘Oh that’s nice, I’ll never get this part but, y’know, I’ll give it my best.'”

Even though Leitch and Pitt go way back and have worked together on six movies, according to Collider, Leitch still feared that the actor might have turned down the offer. The director knew the character had to be played by Pitt, but admitted, “It was a lot of anxiety sending it over. I just was like, ‘Is he going to want to do it? It’s so crazy and wacky and irreverent, and I don’t know.’ And I’m like, ‘I just don’t want to waste his time.'”

Being who he is, Pitt gets offered countless roles from every studio every year, and Leitch couldn’t understand why he’d accept the Bullet Train over any other. But the director was stunned when he got a call from Pitt himself, who was ecstatic to work on the film. He also said that once Pitt signed on, the studio was immediately behind the film and put all of its resources into it.

Though Pitt might have been excited to work on the movie, he isn’t going to do it for less than his minimum salary. Many movie stars like Pitt don’t show up on set for less than $10 million, and that figure was double for Bullet Train.

Pitt is such a bankable actor and comes with a guaranteed audience, as thousands of people will see the movie in theaters just based on him alone. And while he is a great performer, his box office power is exactly why studios want him in every movie.

The new action movie sports an incredible ensemble cast, but a lot of the passengers of the titular train have familiar faces too. The movie features some great cameos from the likes of Channing Tatum and Ryan Reynolds, but, according to Entertainment Weekly, there was one planned cameo that unfortunately didn’t happen.

The cameo would have been a Speed reunion, as Keanu Reeves would have joined Sandra Bullock on screen. Throughout the movie, Ladybug quotes Barry, his therapist, and though viewers don’t see Barry, Leitch wanted a scene with the off-screen character played by his John Wick partner in crime.

The film has such a huge cast, and along with Brad Pitt, Sandra Bullock, and Joey King, Aaron Taylor-Johnson also has an important role. However, it seems like he has been attached to the project much longer than anyone else, as he recalled how much different the original story was.

Screenplays go through a lot of drafts before they enter production, but according to Taylor-Johnson, the final cut of the movie is unrecognizable from the first draft. The actor commented, “Originally this thing was quite a dark, R-rated, vicious action piece, but we hammed it up and made it fun. I don’t know what happened, but it became a comedy!”

According to Deadline, the idea was originally developed by Antoine Fuqua. That explains why the screenplay was originally so dark, as Fuqua directed pitch-black crime movies like Training Day, Shooter, and Brooklyn’s Finest.

There’s no note of whether or not Fuqua originally planned to direct it himself, but it would have been interesting to see a dark thriller movie set entirely on a train and directed by the Southpaw filmmaker.

Though Leitch hasn’t been Pitt’s stunt double for a while, that doesn’t mean the actor doesn’t have one. However, Pitt did 95% of his own stunts in Bullet Train, which is impressive given that he’s much older than he was in the 23-year-old Fight Club, and he even wasn’t doing all of his own stunts then.

Greg Rementer, the movie’s stunt coordinator, says of the actor, “He’s like a natural-born athlete. He really got in there!” The actor is pushing 60, and he’s still giving it everything he’s got in $90 million action movies. Rementer also compliments the rest of the cast for their commitment, adding, “Never have I ever done so many huge actors in one feature where all of them excelled at the physical movement of our training.”

NEXT: The 10 Best New Movies To Watch On Netflix This Month