By aliyaroyOctober 21, 2021No Comments3 Mins Read 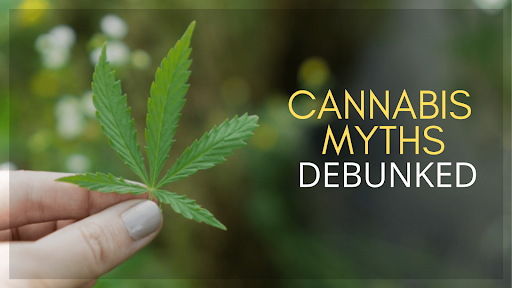 You must have heard a lot of stories related to the use of cannabis. You know, chances are that most of them are myths. Just like any other thing on this earth, cannabis too comes with a set of myths. People found searching for “weed dispensaries near me” are attacked with these myths. Today, we are here to debunk some of the most common myths that you must have heard about cannabis or weed.

Cannabis can cause cancer

Cannabis causes cancer – a myth! Cannabis smoke indeed contains carcinogens, just like tobacco smoke. But, generally, a pot smoker consumes less pot than a tobacco consumer would do in cigarettes. That is not at all enough to cause cancer. In fact, a study in 2006 claimed that even heavy cannabis consumption did not lead to cancer of any type.

Like most other drugs, a common myth says that cannabis is highly addictive. There are a lot of theories that define what addiction actually is. Most commonly experts blame psychological trauma or an emotional crisis that pushes you towards addiction. Another thing that brings addiction into the picture is that every drug or medicine comes with different addictive elements. These elements decide the addiction level that a product is expected to induce. But a person’s psychological condition also plays an important role. Having said that, you must know that it is a myth that cannabis is highly addictive because only 9 percent of the total cannabis users around the world end up getting dependent on drugs. The addiction rate of alcohol is about 14 percent and still is socially acceptable than weed.

Cannabis is a drug that is most commonly seen as a culprit to take you on the road to other addictive drugs. There is no scientific research to date that proves cannabis is a gateway to harder drugs. In fact, in the areas where cannabis has been a part of their culture, there is no sign of other drugs. Cannabis is a recreational drug and doesn’t open a gate to the drugs world.

Cannabis can cause brain damage

Another very common myth that you must have or will hear about cannabis is that it can cause brain damage. This myth has been in existence for some time now and has been scaring people. This type of myth has been around because of one study done in France where the brain size of cannabis users was compared with the non-users. The research showed some differences in the brain in processing emotions. That’s all. The study never claimed to prove that cannabis does brain damage.

Weed is not suitable for diabetic people

Weed is not suitable for diabetic patients – again, a very popular myth. In fact, cannabis can increase the level of insulin in some cases, so diabetic people too can search for a weed dispensary to buy.

These are some common myths related to cannabis along with facts.

A Proper Nutrition Plan For An Active Lifestyle

Skin Whitening & Lightening Everything You Need to Know

What Your Food Choices Mean to You Your Health Choices