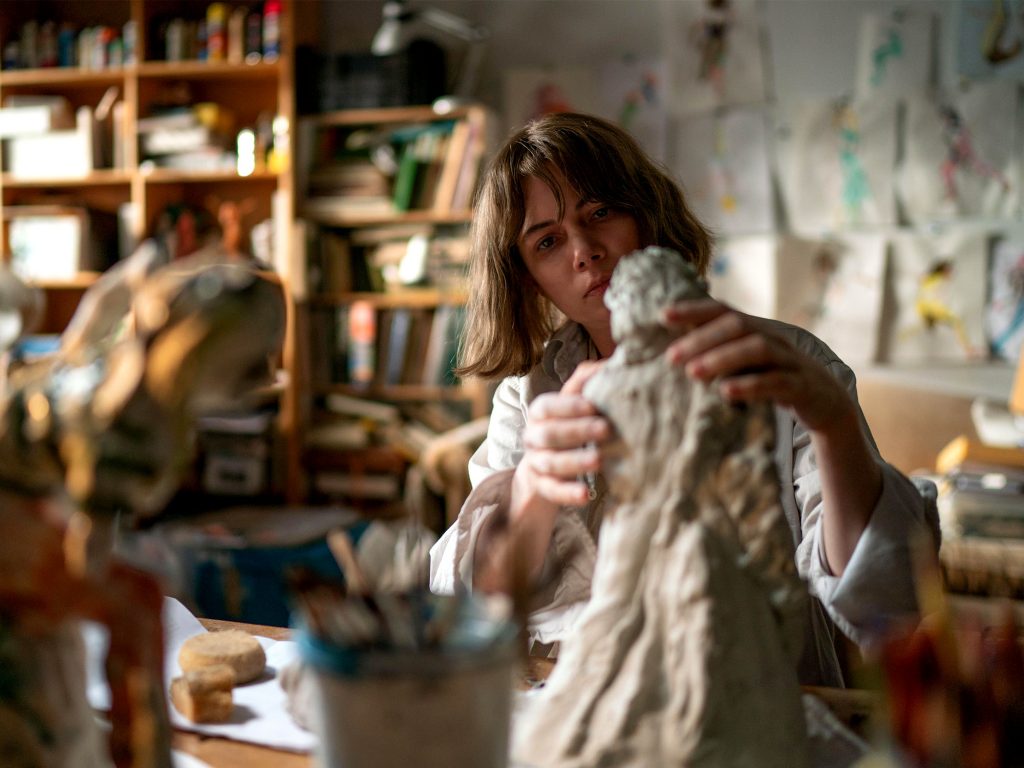 There are few cinematic joys that match the arrival of a new film by Kelly Reichardt, a director who, across a career of eight features and numerous shorts, has developed an affecting signature of movement and steadiness, solitude and community. In her latest, Showing Up, the Portland-based filmmaker brings levity and incisiveness to her portrait of sculptor and teacher Lizzy (played by frequent collaborator, the captivating Michelle Williams) whose artistic practice allows herself to lean into a life of loneliness and occasional bitterness.

Lizzy’s sculptures are free-flowing and gestural, something she struggles to be herself as the pressure of each passing day pushes her shoulders down even further and darkens the bags under her eyes. She wanders from classroom to classroom looking at what other people are making – it recalls the Mitski lyric, “I cry at the start of every movie / I guess ’cause I wish I was making things too.” She bemoans the lack of hot water in her apartment and huffs at the thought of having to take care of an injured pigeon when she should be making art.

And yet, she does take care of the pigeon with the exact concern and gentle touch she applies to her work. The same delicate fingers that press together limbs in clay stroke the bird’s head with tender affection. Is it procrastination that Lizzy seeks here, or simply her duty as a creative to nurture something? Beyond all the spite and frustration that simmers on her surface, she’s a caring soul. As she prepares for an exhibition of her work, she labours over her creations and is generously supported by the colleagues around her including a blissful André Benjamin who plays kiln master Eric.

Showing Up is perhaps Reichardt’s funniest film to date, closest in tone and style to something like Old Joy, her second feature length, in its candid simplicity and dryly comic matter-of-factness. It’s also perhaps the closest to being an autobiographical project in her oeuvre, in the sense that Reichardt is both filmmaker and teacher within a university space and seems astutely aware here of the dynamic that pervades such a lifestyle.

She is playful with costume — Lizzy sports Crocs for most of the film—and embraces the quintessential art teacher uniform for her characters who wear loose, earth-toned culottes and oversized shirts. Her setting, too, is a haven: the Oregon College of Art and Craft and surrounding community, which is another level of Pacific Northwest idyllic, even by Reichardt’s low-and-lazy standards.

Lizzy’s neuroses come to a head around her showcase, compounded by the fact that her fragile brother Sean (John Magaro) seems to be having an episode of mental ill health and she still hasn’t managed to get landlord Jo (Hong Chau) to fix her boiler. Compliments seem to fly over her head; the arrival of a New York gallery owner garners little excitement. Lizzy fixates on the pigeon, the one sculpture that was damaged by the kiln and the countless other things that have in some way hindered her progress.

Reichardt’s portrayal of the claustrophobia of giving yourself to others and to your work constantly is delicate and amusing, but never flippant. Showing Up feels like a moment of release for the filmmaker, a knowing reflection on past work and artistic growth while leaning in to all the beautiful elements of sound, colour and texture that have come to be expected from her work. The air lifts, the pigeon flies away, the conversation becomes easy. A balance is restored. The artist enjoys the moment of lull before the creative process must, inevitably, start all over again.

Do You Need a Home Theatre Power Management System?