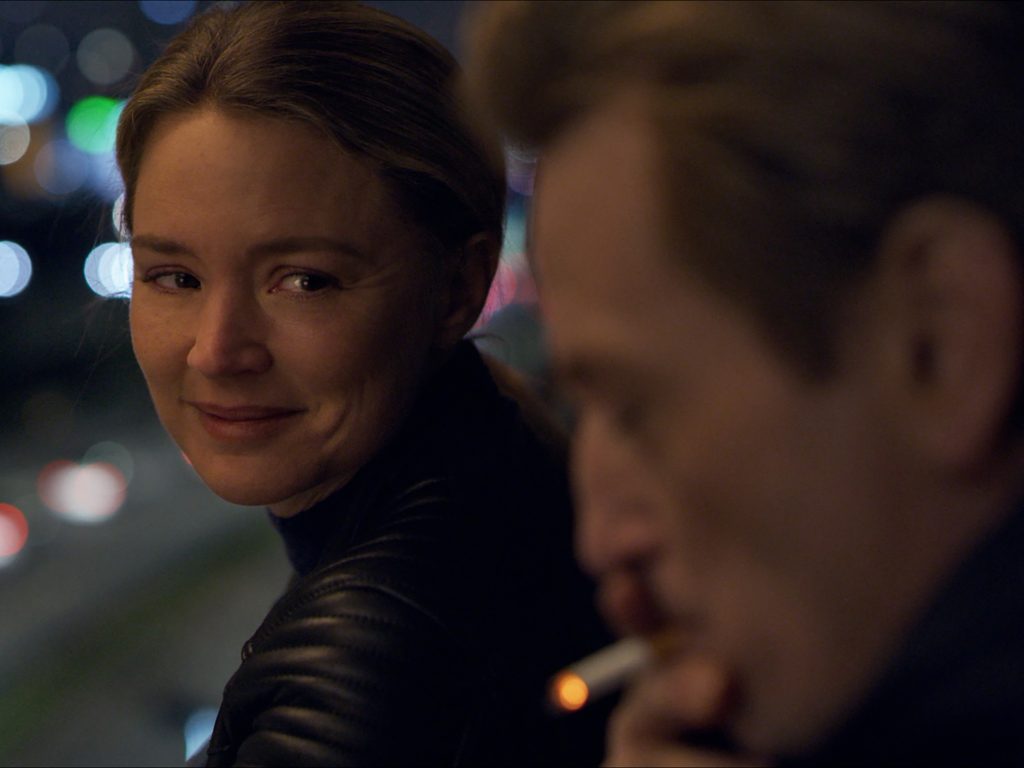 It starts out as an ordinary day for Mia, a journalist and translator who works at a radio station in Paris. She takes her motorcycle to work; she meets her husband Vincent (Grégoire Colin) for dinner. When Vincent – a doctor at a local hospital – declares he has to leave early due to a work emergency, Mia is dejected, and decides to stop for a drink on her way home to avoid a sudden rainstorm. She sits in a booth and observes the strangers around her; two Asian women taking photographs of each other; a group celebrating someone’s birthday. Then all hell breaks loose.

Months later, after surviving the deadly terrorist attack, Mia is struggling to cope with her trauma. Physical wounds may have healed, but she struggles to recall details of the night, and her relationship with her husband has become strained after several months of staying with her mother to recuperate. In an attempt to unpack her feelings about what happened to her, Mia retraces her steps from the evening in question, which lead her to meet other survivors, including the charming Thomas (Benoît Magimel).

Alice Winocour’s Paris Memories is one of two films at Cannes this year inspired by the 2015 Bataclan attacks, the other being Cédric Jimenez’s Novembre – which takes a different approach as a thriller about the hunt to catch the perpetrators. It’s clear that the wounds from the attack still run deep, and no more so than for Winocour, whose brother survived the Bataclan. The conversations she had with him about his experience inspired this film, though this is a fictionalised account about an attack that is never really explored – the perpetrators are unseen, and mentions to them are vague apart from it being stated that there were several attacks throughout Paris that night.

This is likely to avoid taking any political stance, but perhaps the wider point can be made that to the victims of the attack, the motivation is secondary to the life-changing impact. Mia meets a teenager whose parents died, and a woman who accuses her of selfishly hiding inside a locked bathroom while others tried to get inside. Grief takes many forms, and Mia’s own has previously been a sort of numbness that frustrated her husband. Through a friendship with fellow survivor Thomas she begins to understand what happened to her that night, and seeks out the restaurant worker who sat with her while the attack was going on.

Amid the film’s exploration of trauma, Winocour shines a light on the abuse of migrant labour within the restaurant industry. As Mia searches for the man who comforted her, she learns that many of the restaurant employees were never accounted for due to their undocumented status. After the attack they simply vanished – whether they died or fled out of fear of deportation. Including this subplot is a deft move by Winocour and her team, as it nods to the fact that victim counts often fail the most vulnerable, and the media has a bias towards white, middle-class victims when it comes to reporting acts of terror. Although Winocour does center this experience with Virginie Efira’s character, this is directly rooted in her brother’s experiences.

Although a romantic subplot between Mia and Thomas feels a little contrived, Winocour’s film is a poignant mediation on personal trauma and the importance of memory. For Mia, reclaiming her memories is a way to move forward, to understand what happened to her and start to rebuild. But the film also serves as a tribute to Paris – to remembering that it is possible to love a place despite experiencing something terrible there. When Mia travels the city on her bike or looks out at the square where tributes to lives lost are being cleared away, the lasting connection between her and the city is clear. Cemented by Efrie’s restrained, empathetic performance, Paris Memories is a deft exploration of recovery, and a moving tribute to Winocour’s brother Jérémie and those who were caught up in the Paris attack of November 13 2015.